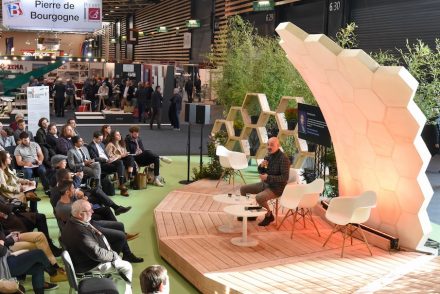 „Stereotomy” is the name given to the age-old direction of architecture, which uses the weight of the stone for construction

We asked Professor Giuseppe Fallacara of the Politecnico in Bari and Director of the New Fundamentals Research Group how he came up with the idea of building an acoustic shell in natural stone, and he just laughed and said: „I had never seen anything like it in stone before.” The result was one of the attractions at the Rocalia trade fair in Lyon, France, in early December 2019.

Building according too it does not always take place in compiling the same ashlars, but in a grammar of individual elements, each of which has its own form. Natural stone, which nowadays can be cut very precisely and cheaply by CNC robots and wire saws, is thus given a completely new unique position compared to other materials: with concrete, for example, such constructions would be very expensive because a separate mold would have to be made for each element.

The whole thing is based on the fact that the weight, which characterizes marble, granite & Co, is recognized as the strength of these materials and used for construction, just as it used to be in self-supporting arches for bridges or vaults for cathedrals.

The concert shell on the Rocalia was a modern example of this.

Why the construction stands completely without supports and does not tilt forward can be seen on the back: there, steel bands connect the elements with each other. A video shows how the individual hexagons were placed on top of each other and connected in just one day. 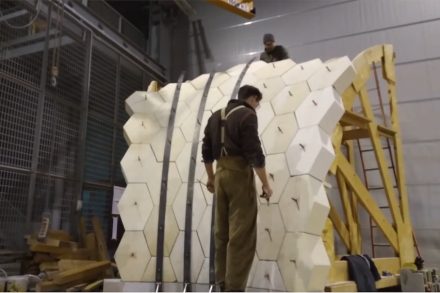 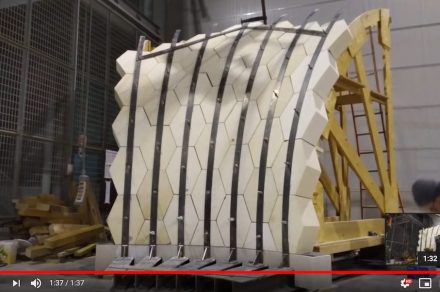 Each element has a hook on the back, with which it is placed in its intended position by crane; the hooks then serve as fasteners for the steel straps.

The work was carried out by the Compagnons du Devoir du Tour de France. This is the network for stonemasons and other craftsmen on their travels.

It is important when cutting to size that the sides of the elements fit together exactly. Only in this way can the load be transferred to the foundations.

The theoretical preparatory work had been carried out in a similar project by Fallacara for the southern Italian city of Matera (published in the Nexus Network Journal Architecture and Mathematics, 20/2018, see link below). 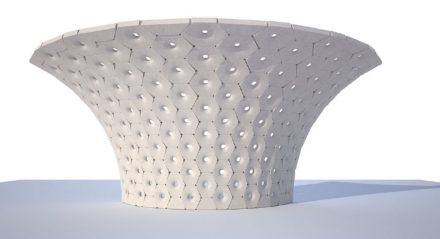 The model shows the concert shell as an all-round structure – one can see that here, unlike in the Rocalia project, the stone types are repeated per vertical row, which further reduces the cost of producing the elements in larger numbers.

Here too, it is the weight that keeps the hexagons in place.

Where could one imagine applications for the stone concert shell? Referring to the quick assembly and dismantling, Fallacara thinks that the construction could be erected anywhere, even temporarily, if desired. One could thus create a bit of „the cultural atmosphere of the ancient Greek theater!”, he mails to our question.

As far as the scaffolding necessary for the construction is concerned, he wants to try a pneumatic cushion soon.

In the conclusion to the student project for Matera, the strengths of stereotomy are summarized: „The architect fluent in stereotomy has the tools to conceive a covered space where form, material and structural performance are integrated in the design act. Furthermore, he knows how the form should be divided in significant parts and how to materialize those parts to fulfill his original vision.” 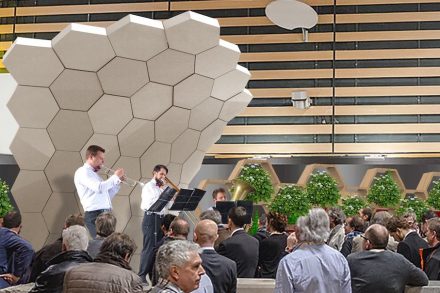