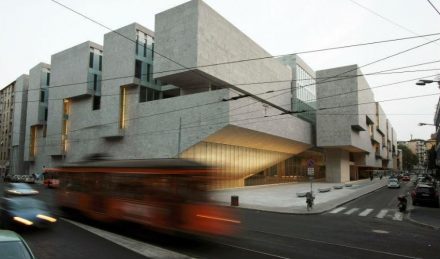 The 2020 Pritzker Prize goes to Yvonne Farrell and Shelley McNamara who founded Grafton Architects in Dublin. One of their well-known buildings was for the Università Luigi Bocconi in Milan: the conglomerate Ceppo di Grè at the façade and the marbles Bianco Lasa and White Carrara on some of the inside floors use the same material like many buildings in the city. The walls of the Aula Magna are clad with Pietra Serena. The award is worth US-$ 100,000 and is sometimes dubbed as Nobelprize of Architecture. At Marmomac 2012 the architects had designed Italian company Pibamarmi’s booth as an abstract landscape (1, 2).

The Marble House in Newport, Rhode Island completed in 1892 for William K. and Alva Vanderbilt is again open for visitors. The opulent building remembering the White House is a National Historic Landmark (1, 2).

The Macael Foundation (AEMA) has published the February issue of its online Architecture & Design magazine (Spanish).

Researchers at the King Abdullah University of Science and Technology (KAUST) have discovered that dust from the Middle East has a cooling effect over the land and the Red Sea.

The Earth of 3.2 billion years ago was a „water world” with submerged continents, geologists say.

Call for international creatives: Helsinki Design Week has launched a call for entries for its main exhibition to take place in the Olympic Stadium September 11-13, 2020. Deadline is April 06.

The Columbian Universidad Santo Tomas has released a study about the Travertines of the Cantera San Antonio from the municipality of Villa de Leyva.

4,700-year-old step pyramid of Djoser in Egypt was reopened to the public, after years of renovation.

Half of the world’s beaches could disappear by the end of the century due to coastal erosion, according to a study led by the European Commission Joint Research Centre.

Video of the Month: The Cathedral of Chartres, France (1, 2).