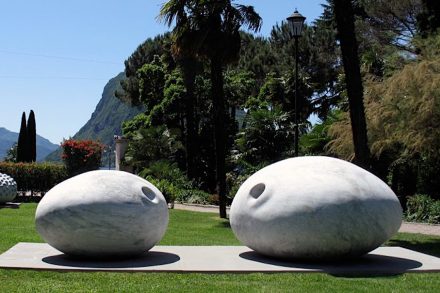 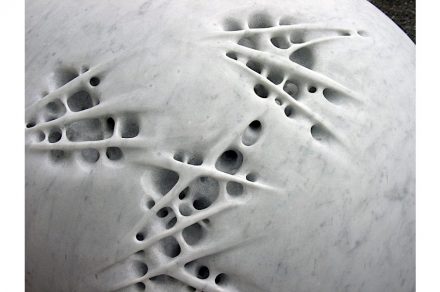 With her works, the Swiss artist depicts „the primal symbols of nature and their processes of change”, as she herself says

Are there perhaps nevertheless life-like processes in the stone, perhaps little animals, which are at home there and eat their way through the minerals? The question arises when you look at Sibylle Pasche’s works of art made of Carrara marble: because on the surfaces of many of her stone spheres there are mysterious holes that lead into the material, and in others there are complex depressions that are perhaps the offshoots of cave systems inside.

What’s more, some of her works carry bubbles that appear to have swollen out of the interior – signs of volcanic activity at depth, for example? 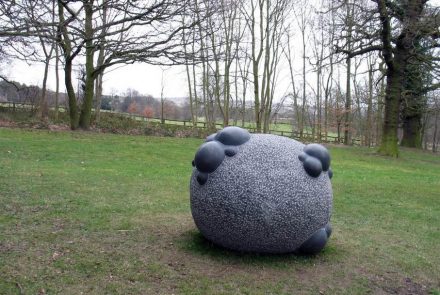 However, for the viewer, the works of the Swiss artist are an invitation to go into wild associations.

Her works are at least ambiguous. 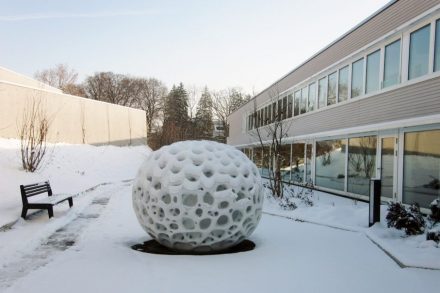 For example, the work „Time Traces – Traces of Time”, which is set up at the old people’s centre in the village of Meilen on Lake Zurich. Not only the title of the work, location and material have an interplay. During the warm months, the sculpture also becomes a fountain, which, for those who know, refers in turn to the historical field name „Wasserfels” (water rock) of the area.

In many respects, Sibylle Pasche’s work is about life: about human life, about that in nature, and also about the geological processes inside the earth, which in turn affect all life on the surface of our planet. She herself describes her sculptures as follows: „They are primal symbols of nature and its processes of change.”

She must have been born with art in her cradle. „I always liked to draw and make things, even when I was very little”, she emails us when we ask her. Her parents had encouraged this and sent her to the Liceo Artistico in Zurich, a secondary school with a focus on visual design and languages. 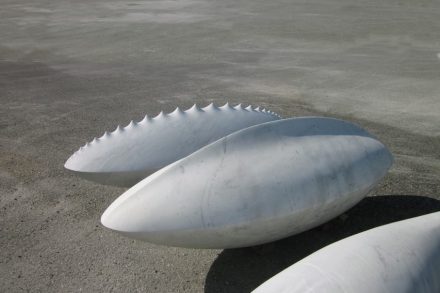 That she came to the stone was „perhaps more of a coincidence”, she writes. But for her sculpture studies she chose the Accademia di Belle Arti in Carrara. There she came into contact with many art movements, but she remained attached to the „idiosyncratic and natural” material stone. „It still gives me great pleasure to be able to shape it with ,gentle force’.”

She had found her organic and roundish forms when she reduced the anatomy of the human body more and more during her studies and thus finally found her round or egg-shaped „primeval forms of all life”. „For me, they embody the beginning (birth) and the end (change) with the resting power of ,stranded’ erratic blocks that have simply been left lying around somewhere and thus naturally integrate into their environment as foreign bodies.” 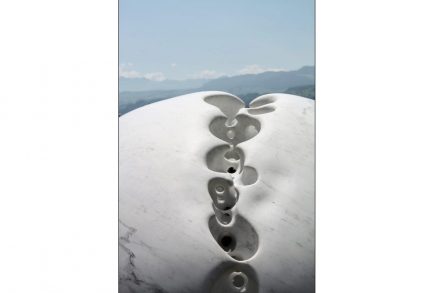 As far as her way of shaping the stone is concerned, she keeps it by hand. She and her 2 employees in her workshop at Studio d’Arte Telara in Carrara use only the diamond saw to roughly cut the rough block to size. She reports on the experiences of her colleagues, according to which they always have to „eliminate small mistakes made by a robot, which sometimes multiply during the work”. This is one of the reasons why „it is usually (even) more expensive to program the robots than for the three of them to step on the gas”.

However: Hectic does not seem to be what the woman in her mid-forties is striving for in life (with her husband and 2 children), even in her workshop in Zurich. The stone „so wonderfully contrasts the fast-paced nature and sometimes frightening superficiality of our world today, which is so strongly influenced by social media”.

She also likes „the timeless aspect of the stone, which refers to the basic values in our culture across the generations”. 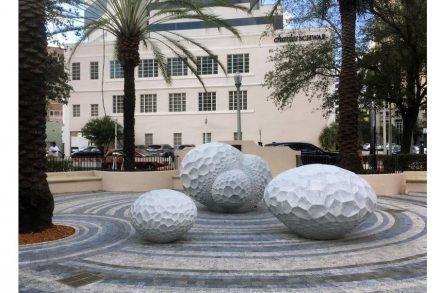 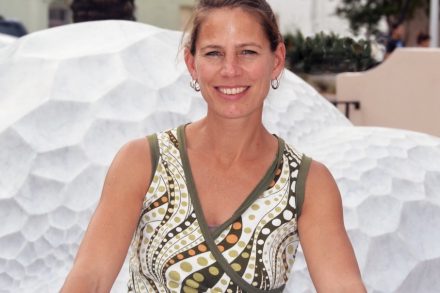