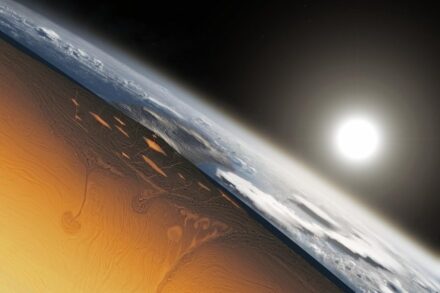 An enduring question in geology is when Earth’s tectonic plates began pushing and pulling in a process that helped the planet evolve and shaped its continents into the ones that exist today. Some researchers theorize it happened around four billion years ago, while others think it was closer to one billion.

A research team led by Harvard researchers looked for clues in ancient rocks (older than 3 billion years) from Australia and South Africa and found that these plates were moving at least 3.2 billion years ago on the early Earth. In a portion of the Pilbra Craton in Western Australia, one of the oldest pieces of the Earth’s crust, scientists found a latitudinal drift of about 2.5 centimeters a year and dated the motion to 3.2 billion years ago.

The researchers believe this shift is the earliest proof that modern-like plate motion happened between two to four billion years ago. It adds to growing research that tectonic movement occurred on the early Earth. The findings are published in Science Advances.

Plate tectonics is key to the evolution of life and the development of the planet. Today, the Earth’s outer shell consists of about 15 rigid blocks of crust. On them sit the planet’s continents and oceans. The movement of these plates shaped the location of the continents.

It helped form new ones and created unique landscapes like mountain ranges. It also exposed new rocks to the atmosphere, which led to chemical reactions that stabilized Earth’s surface temperature over billions of years. A stable climate is crucial to the evolution of life.

For the study, members of the project traveled to Pilbara Craton in Western Australia. A craton is a primordial, thick, and very stable piece of crust. They are usually found in the middle of tectonic plates and are the ancient hearts of the Earth’s continents.

This makes them the natural place to go to study the early Earth. The Pilbara Craton stretches about 300 miles across, covering approximately the same area as the state of Pennsylvania. Rocks there formed as early as 3.5 billion years ago.

In 2017, Harvard scientists Roger Fu and Alec Brenner took samples from a portion called the Honeyeater Basalt. They drilled into the rocks there and collected core samples about an inch wide.

They brought the samples back to Fu’s lab in Cambridge, where they placed the samples into magnetometers and demagnetizing equipment. These instruments told them the rock’s magnetic history. The oldest, most stable bit of that history is hopefully when the rock formed. In this case, it was 3.2 billion years ago.

The team then used their data and data from other researchers, who’ve demagnetized rocks in nearby areas, to date when the rocks shifted from one point to another. They found a drift of 2.5 centimeters a year.

Fu and Brenner’s work differs from most studies because the scientists focused on measuring the position of the rocks over time while other work tends to focus on chemical structures in the rocks that suggest tectonic movement.

Researchers used the novel Quantum Diamond Microscope to confirm their findings from 3.2 billion years ago. The microscope images the magnetic fields and particles of a sample. It was developed in collaboration between researchers at Harvard and MIT.

In the paper, the researchers point out they weren’t able to rule out a phenomenon called “true polar wander.” It can also cause the Earth’s surface to shift. Their results lean more towards plate tectonic motion because of the time interval of this geological movement.

Fu and Brenner plan to keep analyzing data from the Pilbara Craton and other samples from around the world in future experiments. A love of the outdoors drives both of them, and so does an academic need to understand the Earth’s planetary history.