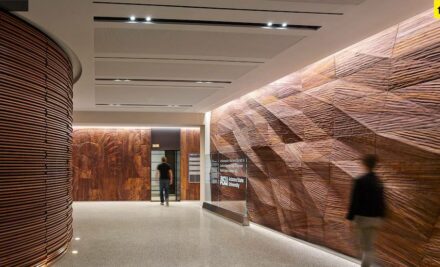 Whoever visits the US state of Arizona knows what to expect outside the air-conditioned areas in the offices and apartments: there is desert heat, and in the hinterland there are the famous sandstone gorges carved to sculptures by that wind and torrential rain. On the other hand, if you visit the new building of the Arizona State University in the federal capital Washington D.C., the unexpected awaits you: in the lobby of the venerable building the striking landscape of the US state is reproduced on 2 walls.

This was not done in the form of a replica of the magnificent gorges as true to the original as possible, but as an abstract interpretation in natural stone, which nevertheless allows beholders to recognize the original. 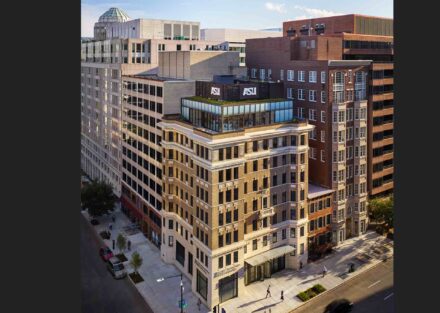 The building is the Barbara Barrett & Sandra Day O’Connor Washington Center, with which Arizona State University (ASU) situated in the federal capital, and which has become a new focal point. The 8-story building, just 2 blocks or about a 10-minute walk from the White House, displays the neo-classical style of the 1910s, was initially used for apartments, later for offices, and has recently undergone a fundamental transformation to meet the needs of the university.

From there, the university now lobbies on its own behalf and reaches out to the world of politics and business for its students.

A special entrance area was needed for the building, with which the university would say as much about itself as possible, albeit with diplomatic restraint.

The 2 walls on the ground floor have achieved this: they leave no doubt that ASU is also committed to its home in the capital, paying homage to both in style. 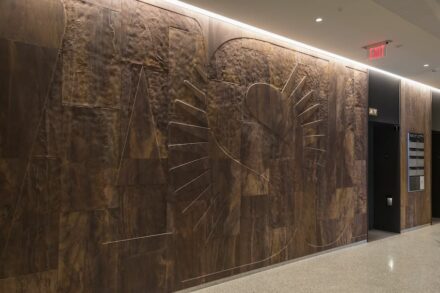 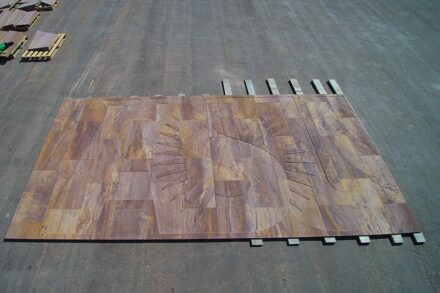 On the wall with the University’s logo, the visitor becomes aware of this at first glance – precisely because the logo of the university is only indirectly recognizable. At first the visitor only somehow suspects that there is more to this wall than just the desert colors from yellow to brown, and so he turns his head back and forth until he has captured the outlines of the 3 letters with the sun.

After all, university also means seeking active knowledge and reading between the lines and the signs.

Perhaps even better, because actually completely detached from the university itself, is the 2nd wall. This is one of those narrow and winding slot canyons that are among the state’s tourist attractions. Constant wind with a high percentage of sand grains combined with occasional torrents after thunderstorms have created these special landscapes. 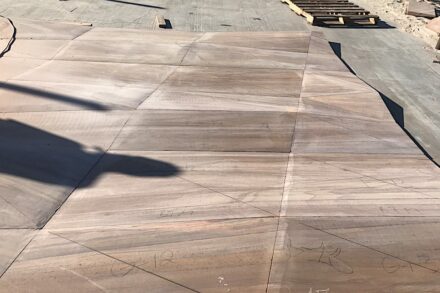 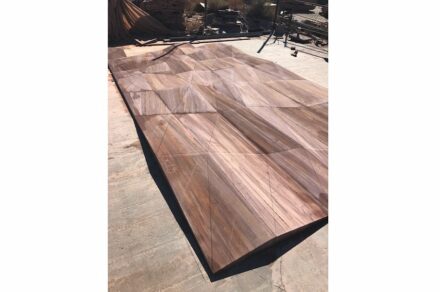 Architects have replicated the original gorges as elevations and depressions in the stone slabs.

The stone in question is the metaquartzite “Las Vegas Rock”, which is extracted in the company of the same name not far the gamblers’ paradise. It can be described as a very special sandstone with a very high proportion of quartzite, which is correspondingly hard and durable. It is only extracted from Las Vega Rock.

Starting point for this wall were irregular rectangles. In the photo you can see that their surfaces are spatially arranged in triangulations: 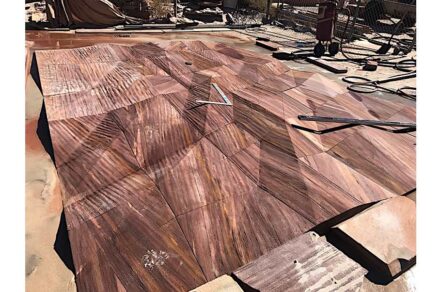 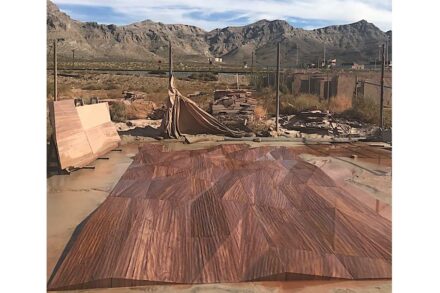 The final design of the surfaces was carried out with a sandblaster – similar to the processes in nature. The people in the chunky protective suits became artists, because it depended on their know-how how the individual stone slabs fitted together and how the complete wall would look in the end.

The staff at Las Vegas Rock did a masterful job. Sandblasting as an artistic treatment is not seen every day. Only in a few cases did the installation need to be reworked. This was the task of the company Boatman & Magnani. This was preceded by levelling the floor with the highest accuracy. Then the stone slabs (maximum thickness of a good 15 cm) could be attached to a supporting frame in front of the concrete wall. The total size of the mural is 12 x 3 m (40 x 10 feet).

The illumination with grazing light emphasizes the special features of this wall once again.

The design came from the Washington-based firm CORE Architecture + Design.

The project received one of the Pinnacle Awards 2019 from the Natural Stone Institute.