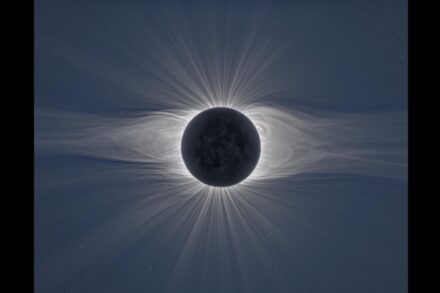 Researchers at the University of Hawaii Institute for Astronomy (IfA) have been hard at work studying the solar corona, the outermost atmosphere of the sun that expands into interplanetary space. The properties of the solar corona are a consequence of the Sun’s complex magnetic field, which is produced in the solar interior and extends outward into space.
IfA graduate student Benjamin Boe conducted a new study that used total solar eclipse observations to measure the shape of the coronal magnetic field with higher spatial resolution and over a larger area than ever before. The results were published in the Astrophysical Journal.

“The corona has been observed with total solar eclipses for well over a century, but never before had eclipse images been used to quantify its magnetic field structure,” explained Boe. “I knew it would be possible to extract a lot more information by applying modern image processing techniques to solar eclipse data.”

Boe traced the pattern of the distribution of magnetic field lines in the corona, using an automatic tracing method applied to images of the corona taken during 14 eclipses the past two decades. This data provided the chance to study changes in the corona over two 11-year magnetic cycles of the Sun.

Boe found that there were very fine-scale structures throughout the corona. Higher resolution images showed smaller-scale structures, implying that the corona is even more structured than what was previously reported. To quantify these changes, Boe measured the magnetic field angle relative to the Sun’s surface. 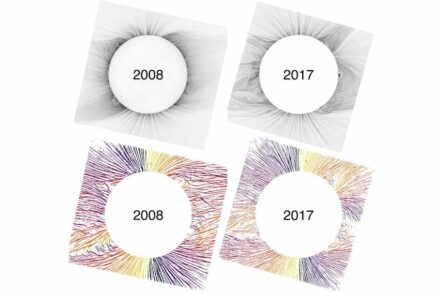 During periods of minimum solar activity, the corona’s field emanated almost straight out of the Sun near the equator and poles, while it came out at a variety of angles at mid-latitudes. During periods of maximum, the coronal magnetic field was far less organized and more radial.

“We knew there would be changes over the solar cycle but we never expected how extended and structured the coronal field would be,” Boe explained. “Future models will have to explain these features in order to fully understand the coronal magnetic field.”

This work has further implications in other areas of solar research – including the formation of the solar wind, which impacts the Earth’s magnetic field and can have effects on the ground, such as power outages.

“These results are of particular interest for solar wind formation. It indicates that the leading ideas for how to model the formation of the solar wind are not complete, and so our ability to predict and defend against space weather can be improved,” Boe said.

Boe is already planning to be part of his team’s next eclipse expeditions. The next one is slated for South America in December 2020.

Source: University of Hawaii at Manoa