Archaeologists discover a massive circle of prehistoric shafts near Stonehenge 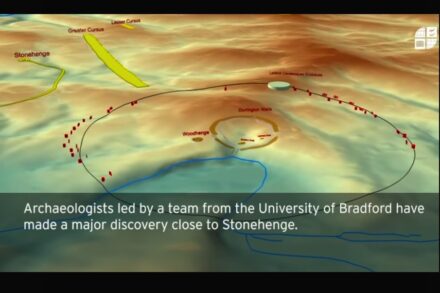 Stonehenge may be one of the best-studied archaeological sites on earth, but a team of scientists is celebrating the discovery of a major new prehistoric monument only a short distance away from the famous stone circle. Recent fieldwork and analysis have revealed evidence for 20 or more massive, prehistoric shafts, measuring more than 10 m in diameter and 5 m deep. These shafts form a circle more than 2 km in diameter and enclose an area greater than 3 square kilometers around the Durrington Walls henge, one of Britain’s largest henge monuments, and the nearby smaller prehistoric circle at Woodhenge.

Coring of the shafts provided radiocarbon dates indicating that these features are Neolithic and were excavated more than 4,500 years ago, around the time that Durrington Walls was constructed. Durrington Walls was a Stone Age settlement that perhaps once had 1000 houses and 4000 inhabitants.

Archaeologists believe that the shafts served as a boundary to a sacred area or precinct associated with the henge. The Neolithic period, which is associated with the first farmers in today’s Britain, is characterized by the development of ornate, and occasionally very large, rituals structures and enclosures, including the great stone circle at Stonehenge.

However, no comparative prehistoric structure in the UK encloses such a large area as the circle of shafts at Durrington, and the structure is currently unique.

Aside from the scale of the structure, the circuit of shafts has other surprising characteristics. The boundary appears to have been deliberately laid out to include an earlier prehistoric monument within the boundary – the Larkhill Causewayed Enclosure.

This site was built more than 1,500 years before the henge at Durrington. This distance between the henge and earlier enclosure, more than 800 m, seems to guide the placement of shafts around Durrington. The evidence for how these features were laid out is extremely important as implies that the early inhabitants of Britain used a tally or counting system to track pacing across long distances. Evidence for such careful planning, at such a scale, is unexpected and emphasizes how important the positioning of these features was. 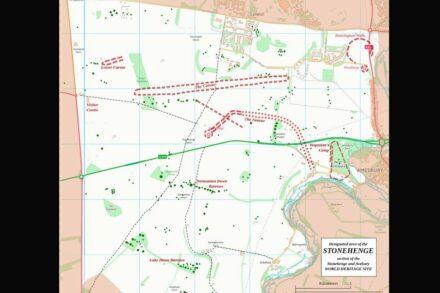 Archaeologists believe the effort invested in the circuit inscribed by the pits reflects an important cosmological link between these two ritual sites, and that the large shafts were dug to record what must have been an important, sacred boundary. The presence of such massive features, and perhaps an internal post line, guided people towards the religious sites within the circle or may have warned those who were not permitted to cross the boundary marked by the shafts.