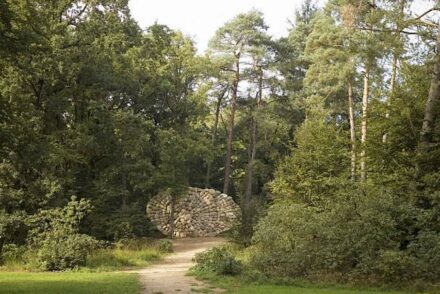 The New Zealand sculptor and land art artist draws inspiration for his work from the proximity, nature and the local history

The New Zealand sculptor and land art artist Chris Booth looks at the world with big eyes, and what he then makes of his impressions is often also big. And heavy. However, if you look closely as he does, you suddenly find the small things that no less define our world.

One of his monumental works is “Echo van de Veluwe”, a work for the park of the Dutch Kröller-Müller Museum. The composition of 310 individual stones with a total weight of 32 tons was mounted horizontally, then lifted over the trees with a huge truck-mounted crane and vertically repositioned at a specific point in the park. 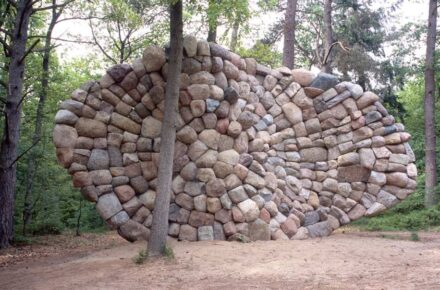 From a distance, the visitor wonders what he is looking at, but as he gets closer, it occurs to him that the individual stones could also be grains of sand that were joined together by giants eons ago. 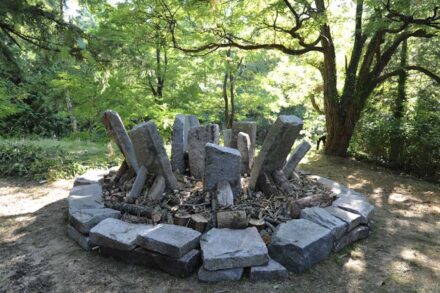 In other works Booth clearly refers to the very great forces of nature, namely convection in the earth’s interior and, as a consequence, plate tectonics in the earth’s crust. This is what happened in the case of “Wairau Strata”, a geological fault line in New Zealand. 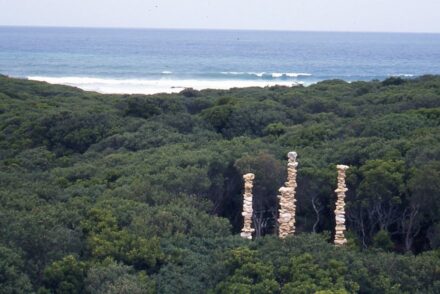 While such works seem to be designed to last forever, there are also many “kinetic” objects, as the artist calls them. For example “Transformation Plant”: here stone blocks are placed on a pile of old wood – just as the organic material will decompose over the years, the columns are supposed to tilt outwards, as if a blossom were opening.

Some people may doubt that this is how it works. But Chris Booth’s works are all based on a sophisticated engineering concept that makes the respective composition possible in the first place and also holds it securely together. The elaborate preparatory work and the type of construction remain hidden.

The fact that in many of his works he makes use of mushrooms of all things and names them as contributors leads us to the small things in his works: because the life form of mushrooms is actually everywhere, but never visible, because the actual plant is a network of threads that grows underground. Only its fruiting body, commonly called “fungus”, comes to the surface under certain conditions to release huge amounts of spores. 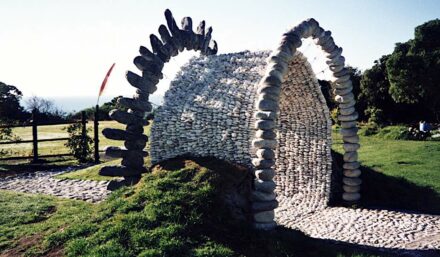 It is the same with the forces inside our planet, of which we only know the result, for example earthquakes. Or the wind, which Booth names as a contributor to some of his high stacks of stones: the “Koonya Beach Columns” stand out from the canopy of leaves in the vegetation and are “looking perhaps to tempt the wind”.

About his way of being creative he writes on his webpage: “The design is based upon the question: what meaningful sculpture would reflect the story of the land and the people.” That means: it appears on site and is inspired by the conditions there. This is followed by a phase of research, for example on local flora and fauna, or on the people and their history.

He prefers to use whatever he finds on the spot as a material. He describes this as a “holistic approach”.

He spent his apprenticeship years in Europe for example with Barbara Hepworth in Cornwall or Quinto Ghermandi in Verona. Since he returned to his home on the North Island of New Zealand, he has always involved an elder from the Aboriginal community in larger projects there. He is concerned with “the spirit of the country”: if the elder expresses serious doubts about the concept, he would revise or even redesign it, he writes on the website.

The fact that this has never happened before encourages him in his approach.

His path to this kind of art was already mapped out in his childhood: “My parents’ love of nature had a huge impact on me and my three brothers. We grew up on an organic orchard surrounded by native bush bordered by a boulder strewn river. Most weekends we were taken exploring the local coast, rivers or bush.”

He has probably also learned that life needs habitats, and so some of his work is designed to ensure that animals and plants colonize them or offer them protection for certain periods of time.