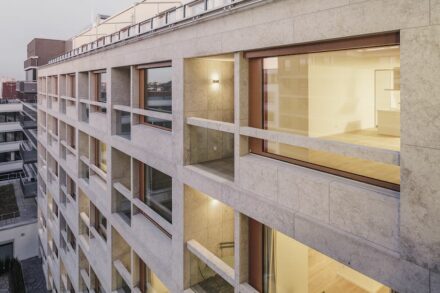 The German Natural Stone Prize (DNP) was awarded for the 19th time this year. It goes to sustainable projects made of natural stone indoors and outdoors, which are exemplary for high architectural quality and energy-saving construction.

There was a total of 66 entries, 17 of which had been nominated for the award.

The prize is awarded in 4 categories:
* “Residential and apartment buildings”
* “Public and commercial buildings”
* “Massive stone elements and refurbishment” and
* “Landscaping and garden planning”.

In each category, the jury selects one winner. One of these 4 category winners will receive the German Natural Stone Award, which is endowed with 15,000 €. Each of the other 3 category winners receives € 5,000.

The award ceremony will be held at the Stone+tec trade fair on May 12, 2021, in Nuremberg. 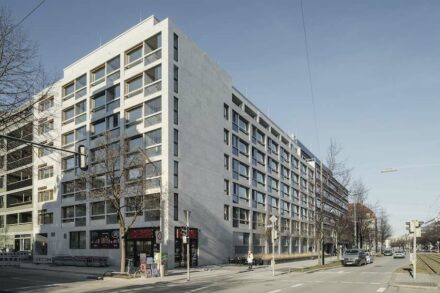 Schwabinger Carré II, Munich
Architects: Meili, Peter Architects, Munich
Used natural stone: Shell Limestone Grigio Alpi
Photos: Florian Holzherr, Gauting
Jury statement: Schleißheimer Strasse is not one of the top addresses in Munich. So the question for the architect was: How can a new building sustainably improve this urban space? With this remarkable example, architectural office Meili, Peter showed how empowerment of a city area can be achieved with architecture that is not spectacular at first glance. 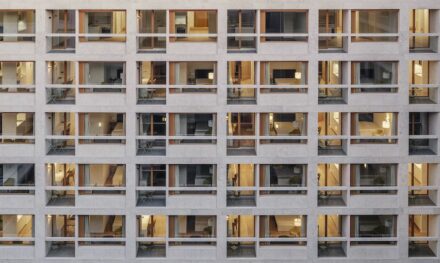 It is a thoroughly urban building located on the corner of Herzog- and Schleißheimer Strasse, solid and delicate at the same time. It has a classical access to the retail trade from the street corner, above it a large number of high-quality “micro-apartments”, as they are called here. 100 such apartments are located in the angular floor plan, more than half directed to both sides of the street. 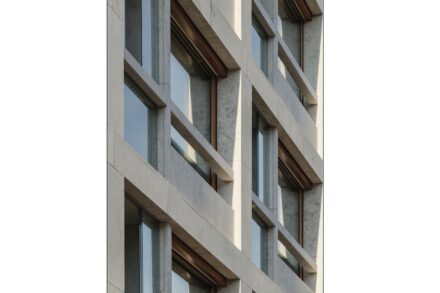 The building is characterized by a generous, three-dimensionally structured natural stone façade. Small loggias alternate with large window formats, the glass surfaces are framed with oak. The shell limestone, Grigio Alpi, is used for the thin pilaster strips or linear parapet elements, but also for large slabs giving the building the necessary weight in its appearance. It is the natural stone, which appears light but not cold, making a house in the city something special. 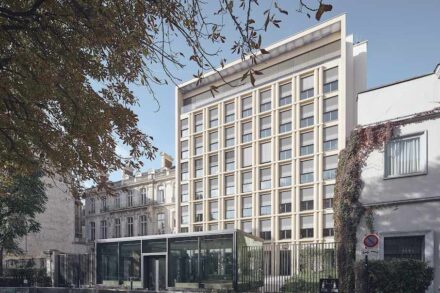 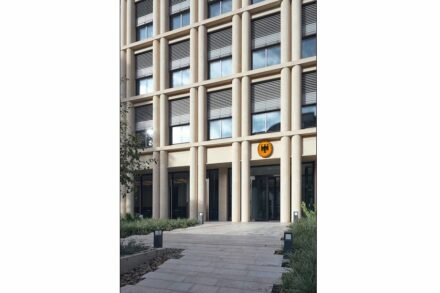 Jury statement: The ancient building of the German Embassy in Paris, completed in the early sixties, showed a sober functionality that was committed to post-war modernity. At that time, it would have been unthinkable to give a building a façade made of cornices and halved columns of natural stone. Now, 50 years later, not only the technical requirements have changed, but also the design requirements in relation to the historical surroundings. 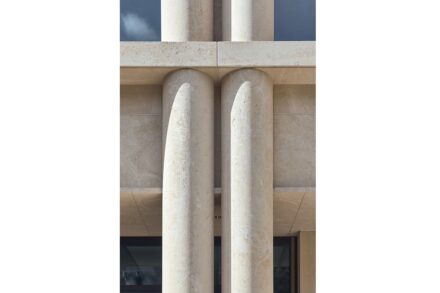 It was the challenge of the new façade design to take this into account and also to represent the new image of the Federal Republic of Germany – s small but extremely delicate task and intellectual challenge at the same time. 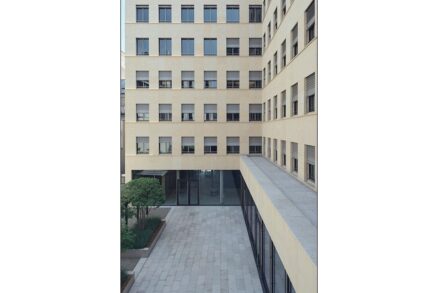 The façade is a beautiful example of natural stone usage, neither old-fashioned nor forced to modern-looking, an architecture that delights also at a second glance. 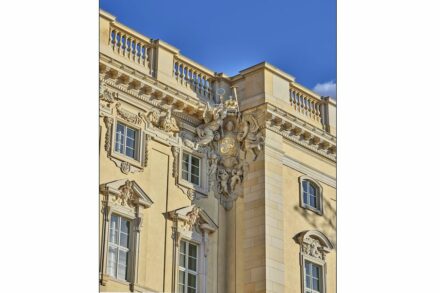 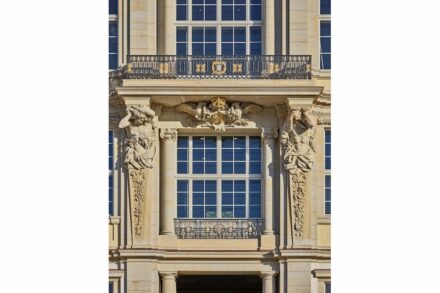 It is probably the most ambitious natural stone building site in Europe at present: The reconstruction of the Berlin Palace – Humboldtforum will consume some 9,000 m³ of stone over a surface of 22,500 m² heritage façade.
Jury statement: Replicas, in whatever form, have been part of the tasks of builders and architects throughout the centuries. For the representatives of modernism, however, reconstructions were mostly tantamount. It was not until the Frauenkirche in Dresden that reconstruction received wide public approval. Independent from the disputes among experts, every structural reconstruction represents an enormous challenge for planners, executing companies, and building owners. 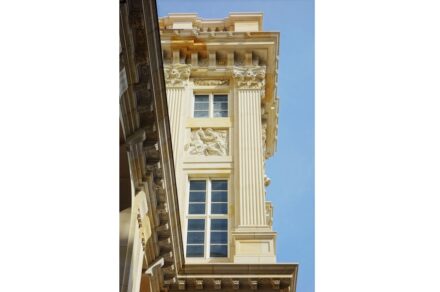 Concerning the effort, the precision in execution, but also the appearance of the reconstructed facade of the Berlin Palace, the dispute is academic. Here, next the traditional craftmanship and manual work, the most modern machines were used for planning and execution. Apart from this, the new exterior wall, rebuilt according to the historical documents, is a grandiose example of sustainability: it is durable, its material, natural stone, shows an excellent energy balance during its life cycle.
Yet for an architectural evaluation, the aesthetical sustainability is the top priority. It is the material and design quality that viewers have enjoyed over many generations and will also enjoy in the future. 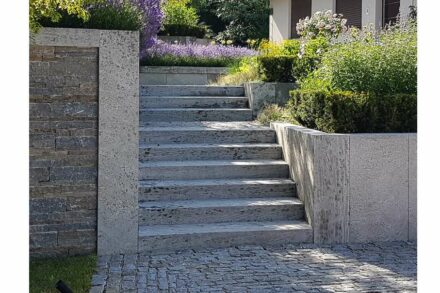 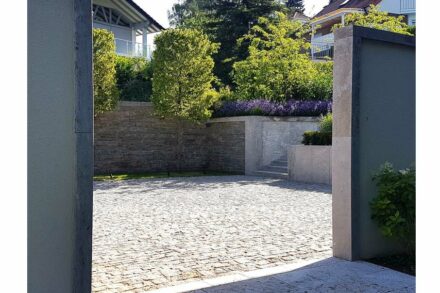 Jury statement: On a property characterized by several buildings oriented in different directions, this garden becomes a connecting element. It creates a spatial continuum, in which the buildings perform their individuality but also united to form the overall composition. Particularly attractive is the way how the topography of the terrain with its slopes is handled. The individual “rooms” in this garden are harmoniously arranged and yet have their own characters. 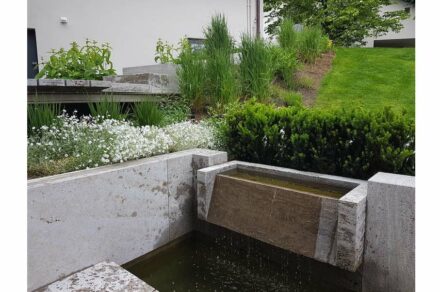 This approach is supported by the continuous implementation of Kohlplattler Muschelkalk. The material is used as paving and slab flooring as well as for retaining walls and stairs in a wide variety. Even seating furniture and water elements are made of it. Particularly noteworthy is the material-appropriate use of the formats as well as the quality of the surfaces. Careful attention is paid to the design of the green, which in its various structures reacts well to the fine materiality of the shell limestone and creates a stimulating interplay of stone and plant, of light and shadow.

The jury consisted of 6 renowned architects and 5 representatives of the natural stone industry: