“Stone House” on the island of Menorca: façade with a charming contrast of external plaster and limestone 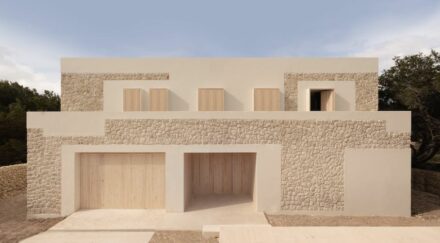 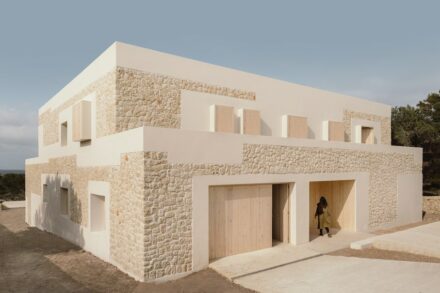 Usually you will only find one material for the cladding on facades. Whether it is glass, ceramics, metal or natural stone, the entire surface (except windows and balconies) is covered with it. The “Stone House” on the Spanish island of Menorca shows just how attractive a material mix can be when it also works with different surfaces: there, architect Karl Johan Nyqvist from Nomo Studio in Barcelona covered the outer skin of the house with rectangles of plaster or quarry stone.

The resulting contrast between smoothed and civilization versus wild and nature is very attractive. 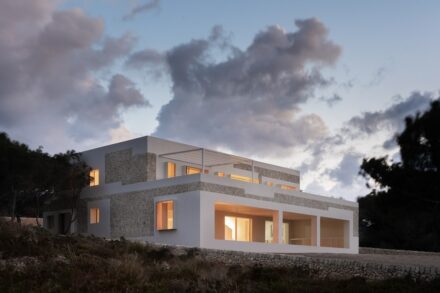 Rectangles of different materials harmonize with each other and with the window openings. There is no mathematically formulated rhythm for this, Nyqvist wrote in response to our question, but he and his colleagues Mira Botseva and Jennifer Méndez have tried out the best interplay with the help of some models.

The client had expressly requested that the house should have obvious references to the landscape and thus integrate unobtrusively into its surroundings. 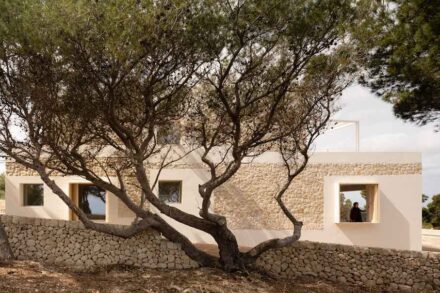 The Nomo Studio team was guided by the dry-stone walls that are traditionally used to mark out the fields on the island. They are especially beautiful when they reach up to an old olive tree and behind it you can see the house facade. The architect says: “From some angle of view you don’t see what is the wall of the plot and the façade because they blend into each other.”

The motif of the dry-stone walls also appears on the house. But now with plastered joints and with the rectangles of brick within smooth surfaces with plaster.

The material used was the limestone that fell on the building site. 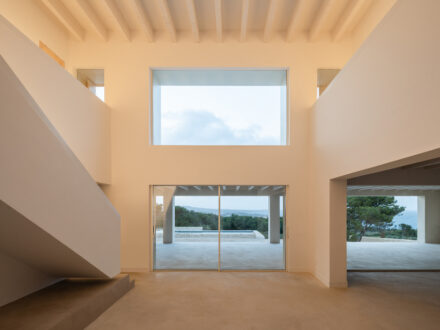 The house has 6 bedrooms, living and dining room, kitchen, bathrooms, garage and other rooms. They are grouped around a room like a courtyard, which rises over 2 floors and opens up the rooms. This is just another reminiscence of the traditional architecture along the Mediterranean Sea, but also a climatic oasis. Large windows facing the sea provide light and access to the balcony with a view of the cliffs. 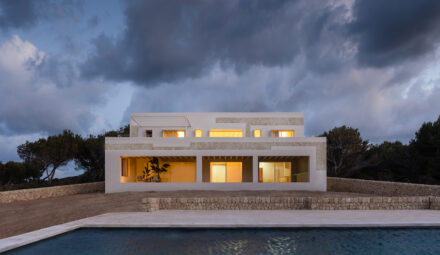 Under the balcony is the winter garden, which can be closed with glass windows.

As usual in the south, the aim is to keep the summer heat out of the house and to let the winter sun in. Therefore the windows are partly set back like boxes in the wall.

Here, too, the architects played with the possibilities: “We found it interesting if not all windows had these boxes because it created a much more lively facade when some were pushed back and other sticking out.”

One more word about the change of material in the façade: perhaps the architect, incidentally Swedish by origin, remembered the frames in light color that are found all over Europe around the windows and that vary a bit: “With the pattern we wanted to make it clear to the viewer that the house is a new building. This pattern was also a way for us to create a more contemporary look so it was clear that it is a new build house.” 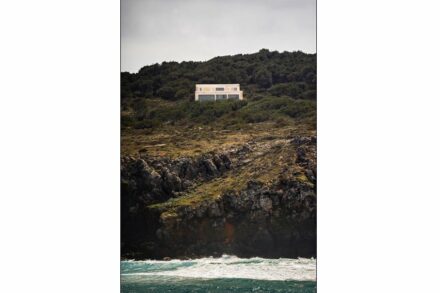