Above the US, this year’s Perseid meteor shower will have its peak in the night from August 11 to 12, in the pre-morning hours 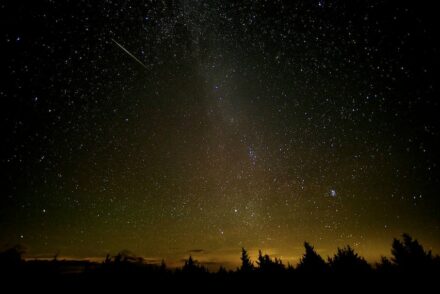 It is caused by the tail of the comet Swift-Tuttle, through which our planet flies every year and whose particles burn up in the Earth’s atmosphere

The Perseid meteor shower is often considered to be one of the best meteor showers of the year due to its high rates and pleasant late-summer temperatures. This year’s shower, however, has the unfortunate circumstance of the Moon phase – last quarter – impeding the view of most of the shower to be seen in the US, reducing the visible meteors from over 60 per hour down to 15-20 per hour. But the Perseids are rich in bright meteors and fireballs, so it will still be worth going out in the early morning to catch some of nature’s fireworks.

Make plans to stay up late the night of August 11 or wake up early the morning of August 12. The Perseids are best seen between about 2 a.m. your local time and dawn. The Moon rises at around midnight, so its brightness will affect the peak viewing window. However, even though the Moon’s phase and presence will keep the frequency of visible meteors lower, there is still nearly one meteor every two minutes during the peak!

If those hours seem daunting, not to worry! You can go out after dark, around 9 p.m. local time, and see a few Perseids. Just know that you won’t see nearly as many as you would had you gone out during the early morning hours.

How can you see the Perseids if the weather doesn’t cooperate where you are? A live broadcast of the meteor shower from a camera at NASA’s Marshall Space Flight Center in Huntsville, Alabama, (if our weather cooperates!) will be available on the NASA Meteor Watch Facebook https://www.facebook.com/NasaMeteorWatch/ starting around 8 p.m. CDT on August 11 and continuing until sunrise on August 12. Meteor videos recorded by the NASA All Sky Fireball Network https://fireballs.ndc.nasa.gov/ are also available each morning; to identify Perseids in these videos, look for events labeled “PER.”

All meteors associated with one particular shower have similar orbits, and they all appear to come from the same place in the sky, called the radiant. Meteor showers take their name from the location of the radiant. The Perseid radiant is in the constellation Perseus. Similarly, the Geminid meteor shower, observed each December, is named for a radiant in the constellation Gemini.

How to observe Perseids

If it’s not cloudy, pick an observing spot away from bright lights, lay on your back, and look up! You don’t need any special equipment to view the Perseids – just your eyes. (Note that telescopes or binoculars are not recommended because of their small fields of view.) Meteors can generally be seen all over the sky so don’t worry about looking in any particular direction.

While observing this month, not all of the meteors you’ll see belong to the Perseid meteor shower. Some are sporadic background meteors. And some are from other weaker showers also active right now, including the Alpha Capricornids, the Southern Delta Aquariids, and the Kappa Cygnids. How can you tell if you’ve seen a Perseid? If you see a meteor try to trace it backwards. If you end up in the constellation Perseus, there’s a good chance you’ve seen a Perseid. If finding constellations isn’t your forte, then note that Perseids are some of the fastest meteors you’ll see!

Pro tip: Remember to let your eyes become adjusted to the dark (it takes about 30 minutes) – you’ll see more meteors that way. Try to stay off of your phone too, as looking at devices with bright screens will negatively affect your night vision and hence reduce the number of meteors you see!