New understanding for the vast stone monuments constructed in Saudi Arabia 7,000 years ago 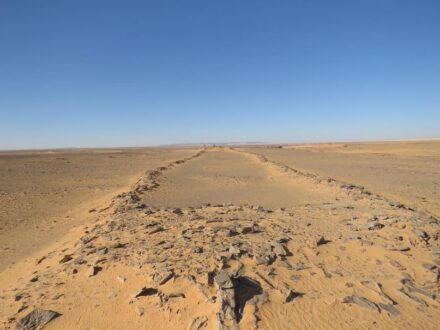 The enigmatic “mustatils” may have been “ritual sites where groups of people met to perform some kind of currently unknown social activities”, according to scientists

“Mustatils” are vast shapes made of piled stone which can be found in northwest Saudi Arabia. Their name refers to the Arab word for rectangle and describes the enigmatic form of these structures in the desert. They had been previously recognized from satellite imagery and as they were often covered by younger structures, it had been speculated that they might be ancient, perhaps extending back to the Neolithic.

Now, for the first time, the mustatils have been analyzed in a detailed study by an international group of scientists. The team used a mixture of field survey and satellite imagery.

More than one hundred new mustatils have been identified around the southern margins of the Nefud Desert, between the cities of Ha’il and Tayma, joining the hundreds previously identified particularly in the Khaybar area.

The team found that these structures typically consist of two large platforms, connected by long parallel walls, sometimes extending over 600 meters in length. The long walls are very low, have no apparent openings, and are located in diverse landscape settings.

It is also interesting that little in the way of other archaeology – such as stone tools – was found around the mustatils. Together these factors suggest that the structures were not merely utilitarian entities for something like water or animal storage.

At one locality the team was able to date the construction of the mustatil to 7000 years ago. An assemblage of animal bones was also recovered, which included both wild animals and possibly domestic cattle, although it is possible that the latter are from wild auroch. At another mustatil the team found a rock with a geometric pattern painted onto it. 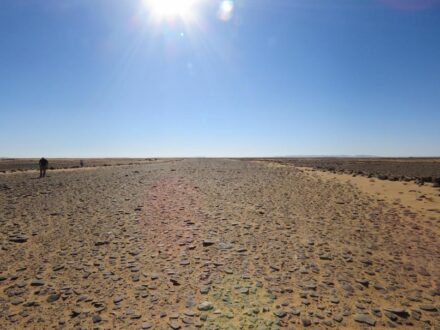 “Our interpretation is that the mustatils were ritual sites, where groups of people met to perform some kind of currently unknown social activities,” says Dr Huw Groucutt, scientist from the German Max Planck group. “Perhaps they were sites of animal sacrifices or feasts.”
The fact that sometimes several of the structures were built right next to each other may suggest that the very act of their construction was a kind of social bonding exercise.

Northern Arabia 7,000 years ago was very different from today. Rainfall was higher, so much of the area was covered by grassland, and there were scattered lakes. Pastoralist groups thrived in this environment, yet it would have been a challenging place to live, with droughts a constant risk.

The team’s hypothesis is that mustatils were built as a social mechanism to live in this challenging landscape. They may not be the oldest buildings in the world, but they are on a uniquely large scale for this early period, more than 2000 years before pyramids began to be constructed in Egypt.

Members of the international research team came from the Max Group, and the Saudi Ministry for Tourism as well as from multiple Saudi and other international institutions.

Source: May Planck Institute for the Science of Human History