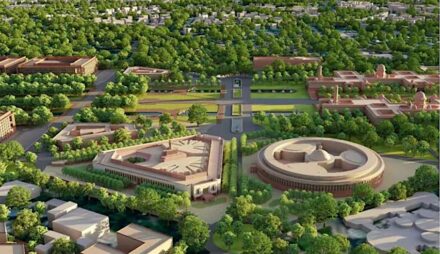 Red Dholpur sandstone from Rajasthan will be the primary façade material for India’s new tringle-shaped parliament building in Delhi. Prime minister Modi has laid the foundation stone on December 09, 2020. The government’s ancient seat located near, a circular monument built during the British rule with 144 sandstone columns, will be used as a museum.

Stones from the British isles are compiled in an interactive map by the Natural Stone Foundation.

In a studio in Pietrasanta, Tuscany, Fort Lauderdale artist Nilda Comas is creating a marble statue of Mary McLeod Bethune to be placed in the U.S. Capitol.

Portugal’s stone association Assimagra has published the 54th edition of the “Boletim de Minas“ by the Energy and Geology General Directorate with natural stone as topic. It informs about the country’s stones and has a report about the Portuguese street pavement (Calçada Portuguesa). Ernesto Matos is the author and we had had several reports about his activities. The complete Bulletin in Portuguese language can be downloaded for free (1, 2).

Video of the month: “Turning heads“ is what US-sculptor Michael Alfano calls his stone faces. The different stone types are meant to remind us that so much heritage from generations before lives on in an individual (Video, 1)