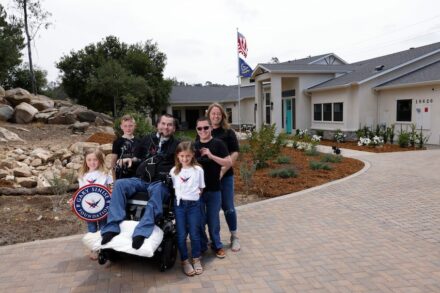 Kenton and his wife Lindsey were high school sweethearts, and soon after they married, Kenton joined the U.S. Navy. Although he initially planned on serving four years before enrolling in college, Kenton loved both the military community and his job as an Explosive Ordinance Disposal (EOD) technician, so he chose to continue his life in the military. On November 19, 2017, while serving in Syria, Kenton was severely injured by an Improvised Explosive Device (IED). As a result of the blast, Kenton became a quadriplegic and was blinded in his left eye. He also experiences issues with speech. Kenton has undergone extensive rehabilitation in several facilities including the TIRR (The Institute for Rehabilitation and Research) Memorial Hermann in Houston, Texas. Kenton has received numerous awards for his service including a Purple Heart, a Bronze Star Medal, and three Navy Achievement Medals. He is proud to have been named the 2010 USO Sailor of the Year.

The Stacy’s have four children, Logan, Mason, Annabelle, and Sadie. Lindsey serves as the primary caretaker for Logan, who has special needs. A specially adapted smart home will significantly improve Kenton’s quality of life as well as provide assistance for Lindsey and their family.