Tales Machado from Magban company and current president of Sindirochas, was elected president of the Brazilian Center for Ornamental Rocks Exporters (Centrorochas) 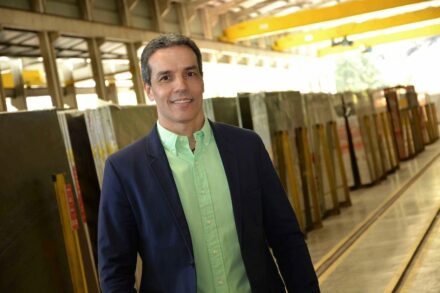 We publish the following press release of Brazilian stone organization Centrorochas about the election of its new board:

At the opening of the meeting, current president Frederico Robison thanked all the business persons for their trust and partnership during the three years he served as head of the association and gave a brief balance of the period. “One of our purposes was the alignment with other entities for the strengthening of the sector, and I believe we succeeded. Today, the entities, boards, presidents, and councils act in a convergent way with the sole purpose of strengthening the sector. Of course, we can’t please everyone or share the same idea, but I believe this is healthy and part of any evolutionary process,“ he pointed out.

In his first speech as president elected, Tales Machado, who will finish his mandate at Sindirochas in August this year, reinforced that he hopes to continue with the support of all members and exporters to give continuity to the work done so far. “We have worked to put an end to the differences that existed in the sector; we had achievements, but we still have a lot to reach. I hope to count on the help of all exporters. We tried to form an entity that represents the whole industry, and it has experienced people of business who are totally aligned with this purpose. I would like to thank them all for their commitment so that, together, we can tread a path of achievements for the entire segment of national ornamental stones,” he said.

Re-elected as vice-president, Fabio Cruz reinforced the approximation work done with other entities and asked for a more direct participation of all exporters. “There has always been a maxim in the sector that there was disunity. Today, this maxim does not apply so much. We have an open dialogue with the companies, proximity and alignment with the employers‘ organizations in Espírito Santo, Minas Gerais and Ceará, the three largest exporting states in the country, among others. So far, we have walked a path to remove the obstacles, now we have fertile ground to plant and, effectively, in a few years, we will be able to harvest the fruits of these actions. I take this opportunity to appeal to all entrepreneurs to act directly in the actions that are being and will be worked on by Centrorochas. We will create working groups for specific issues and the expertise of each one will be very welcome,“ he emphasized.