Roman stonemasonry at its finest: a villa in the ancient cosmopolitan city of Ephesos displayed marble on its walls up to a height of 6 m 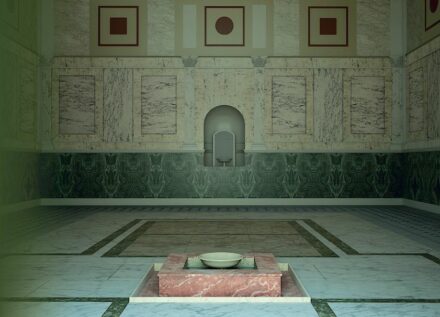 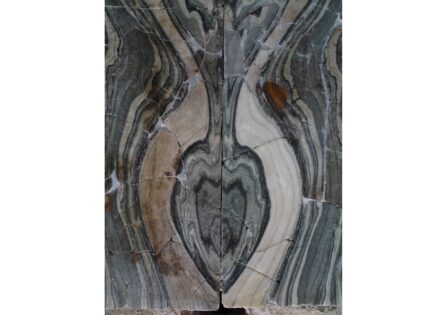 Geoarchaeology Professor Cees Passchier of the University of Mainz, Germany, together with colleagues, has reconstructed the decoration and made some surprising discoveries

At least since the times of the ancient Greeks and Romans, marble blocks have been sawn up to obtain slabs for cladding walls, for example. No one has ever taken the opposite route, namely, to reassemble the finished slabs into a block – what’s the point?

But now it has happened. In a research project around the “Hang Haus 2“ (Terrace House 2) in the ancient city of Ephesos, geoarchaeology Professor emeritus Cees Passchier of the University of Mainz in Germany has recovered original blocks of Cipollino Verde marble wall cladding in the ancient villa 2 B – virtually, of course. The reason: there were discrepancies in the design of the wall, and so the scientists wanted to know what it was all about.

In the meantime, they have a guess as to what the problem was at the time and an explanation as to how the ancient stonemasons solved it.

But one step at a time.

In Ephesos, world city of antiquity and about 70 km from today’s Izmir, a residential settlement was built on a hillside probably in the 2nd century AD. Rich people settled there, among them a certain Caius Flavius Furius Aptus, a high and respected administrative official, in the building now called “Hang Haus 2“ (Terrace House 2) by archaeologists.

The center of his magnificent residence was a hall for representation and banquets: the room has 10 m high walls, which were lavishly covered with different types of marble up to 6.30 m high. 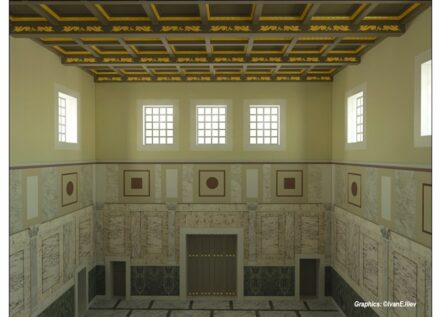 Above there were white varieties in geometric shapes, below at the foot of the walls there was a 1.40 m high plinth of Cippolino Verde. This greenish marble with its wild structure was one of the fashionable stones in that era – it is found everywhere in ruins from the Roman Empire. Invariably, these remnants are broken, which is something we will still be concerned with – as it was probably an issue for the stonemasons at Terrace House 2 as well.

Sometime in the 3rd century, there was a series of violent earthquakes in the region, complete with fire. By the time the last smoke had cleared, the slabs in Terrace House 2 had fallen from the walls and shattered into many thousands of bits and pieces.

Since 1974, they have been counted in the course of excavations by the Austrian Academy of Sciences: there were about 120,000 individual pieces.

For the pedestal this number is known much more precisely: here exactly 10,313 fragments of Cipollino marble were found. They had survived the many centuries in ruins since the villa was abandoned around the year 262. 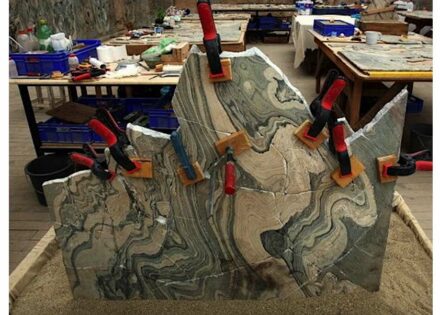 In the meantime, the scientists have spent several years of work to reinforce the 10,313 pieces, reassemble them and bring them back as a base the walls – as far as possible, because some fragments had been lost. Their place in the newly created plates was filled with plaster. 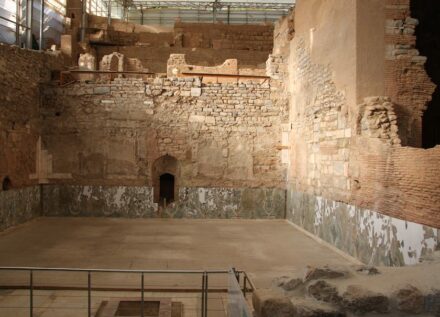 In the meantime, the base again bears the marble bookmatch as in Roman times. However, on the south side there is the mentioned irregularity in the sequence of the slabs. The details of this have been investigated by Cees Passchier in cooperation with the Geological Survey of Canada, and a plausible explanation has been found: the Roman stonemasons knew the Cipollino very well and understood their craft, so that they preferred to take a detour, so to speak, rather than run the risk of breaking the Cipollino slabs.

We present the factual situation in a separate article in our “Stone Detail“ series. https://www.stone-ideas.com/87797/roman-stonemasons-bookmatch-ephesos/

Here’s some more background on the natural stone in the case of Terrace House 2.

The raw blocks of the Cipollino, weighing almost 4 tons each, had probably been quarried on the island of Euboea. The work in the quarry as well as the transport was routine for the Roman technicians. Slaves were usually not used, according to the sources. The business with the stones was, by the way, in the hands of the emperors, who, of course, earned money from all state and private magnificent buildings.

The cipollino blocks were probably cut with gang saw near the construction site of Terrace House 2. The drive came from waterpower – probably, it must be said. Because such devices are scientifically documented only from later centuries. The principle of the saw (without water drive) was already known in ancient Egypt: the workers carefully filled quartz sand or corundum into the saw channel, which then achieved the abrasion under the saw blade.

A lot of experience is needed to control the amount of abrasive and water for optimal results in 24-hour operation.

It is amazing what dimensions the Romans managed at that time: the slabs for Terrace House 2 were only 15 mm thick on average! Today’s standards of calibration must not be applied, however. This is because the thickness of the slabs at the edges was quite different from the center of a slab.

The subsequent polishing was probably done on sand – by hand, of course.

Anchors (dowels) made of bronze or iron, usually 10 to 12 cm long, were used to attach the slabs to the walls in Terrace House 2. They were fixed at one end with lead in the masonry behind and bent upwards at the other. Accordingly, there were holes in the plates.

The space between the wall and the slab was filled with a lime mortar – the quality of this binder must have been weak, so that the mortar probably did not contribute much to the stability of the wall covering. The plinth slabs weighed around 50 kg each.

The reconstruction of the raw blocks by Cees Passchier’s team succeeded by computer modeling the irregular pattern of the anchors in the walls plus the holes in the slabs, along with the structures of the individual slabs. This led to the conclusion that 40 plinth slabs had been cut from a single block. Another 14 slabs came from a 2nd block.

Another finding was how little stone the Romans lost despite their simple machines and manual labor. For one thing, only 2 slabs were broken, this perhaps during polishing or transport. On the other hand, the cutting width of the stone saw with 8 mm was not larger than known from modern technology.