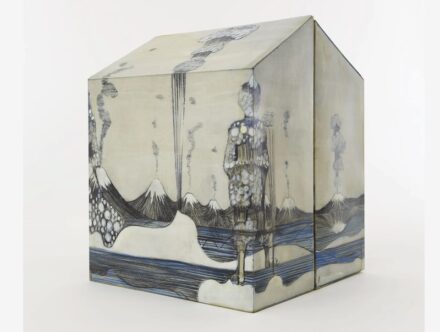 The artist Sandra Vásquez de la Horra presents volcanism and its geology in an unusual way in her work “La Tierra de Algallù“. She was awarded the Hans Theo Richter Prize 2021 of the Saxon Akedemie der Künstler, originates from Chile and lives in Berlin.

The “Italian Stone Network“ is an internet portal for companies from the country’s stone sector to get into contact with international buyers. It is financed by the Italian government‘s ICE export organization.

“Women in Mining & Industry in Spain“ is an organization to promote the employment, retention and advancement of women in the sector, founded about one year ago (Spanish).

A Library of Congress blog reviews the history of the marble vases from the Ulúa Valley in Honduras dating from 600-800 CE.

Specialists at the Victoria & Albert Museum (V&A) in London may have found a fingerprint of Michelangelo on a small wax statue.

The New York Times has reported about robots crafting sculptures in Italy.

A police dog sniffed a block of cocaine disguised as marble cake inside a car in Maine.

A webpage discusses the return of the Elgin Marbles, better known as Parthenon Marbles, from the British Museum to Greece.

Marbles produced in Eastern Nangarhar province in Afghanistan are exported to Uzbekistan, Tajikistan, Pakistan and even Italy despite the unstable political situation, a report says.

Video of the month: Hiking trails through the stone landscapes in Ticino around Bellinzona in Switzerland are shown at the web portal “Via della Pietra“. They explore the local stones from a geological as well as from a cultural perspective (video, 1)