With the Gargash Mosque in Dubai, Saudi architect Sumaya Dabbagh has created a place of worship that breaks with many traditions 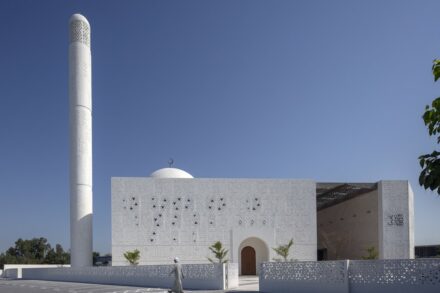 Not splendor and wealth characterize the premises for the conversation with God, but light and spirituality

The commission given to the Saudi Arabian architect by the Gargash family of entrepreneurs from Dubai was very demanding: she was to build a “contemporary“ house of worship in memory of the deceased head of the family, realizing a “minimal“ style that would bring “a calm and spiritual space for prayer“ to the people in the industrial area of Al Quoz.

Sumaya Dabbagh accepted the challenge because she has made a name for herself as a successful architect and as a self-confident woman with precise ideas about gender roles as well.

But unlike places of worship, not only in Islam, which are usually dedicated to splendor in order to praise God, the architect placed the spirit of prayer in the foreground: She understands the conversation with God as an act of immersion in the spiritual world, made possible by a deliberate detachment from everyday life and things.

The path of approach to the spiritual is precisely defined in Islam: it includes various stages of preparation and ablution, and these are followed by the path of the faithful through the Gargash Mosque (written out as Mosque of the Late Mohamed Abdulkhaliq Gargash).

Sumaya Dabbagt has assigned the role of companion and guide to natural light. She wants to “enhance a feeling of spirituality, the connection between the earthly and the divine,“ as she puts it in her press materials.

There are variations in the light from room to room. This is achieved through the many openings through which it falls into the rooms: for example, everywhere there are the distinctive triangles as passages in the walls; the prayer hall has narrow openings on the sides; the mihrab, the prayer niche facing Mecca, receives a radiant brightness through a shaft of light from the ceiling; finally, the perforated dome. 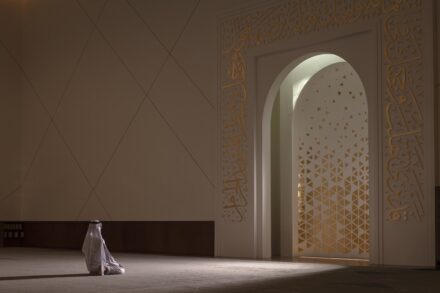 Those who know Islam realize how much this architecture has broken it with traditions. For example, the mihrab is usually the place for the imam. 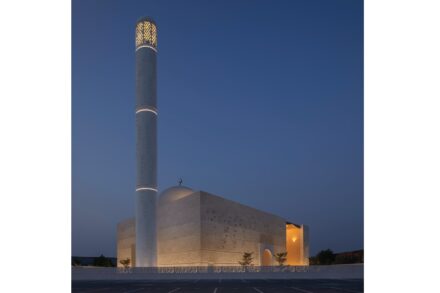 Also, a separately placed minaret is not what you know of a mosque. 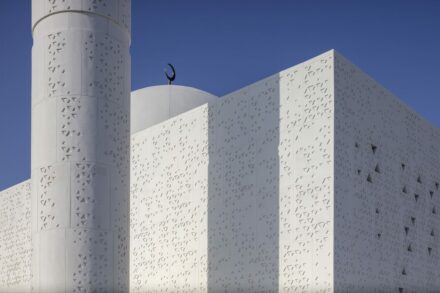 And also the triangles that design the outer sides of the walls no longer have much to do with the familiar enthusiasm of Islamic art for the diversity of geometry. They are simply single triangles and do not complement other, new structures. 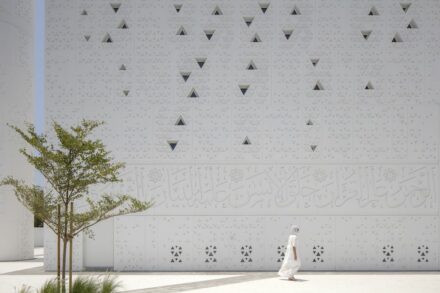 Only calligraphy, as the translation of writing into lines, is allowed to express itself. This in the gilded characters around the mihrab and in a high line on the outer walls around the prayer hall. It is the sura “The Most Merciful.“

It should be emphasized that in the middle of the bustling industrial area and directly on a busy main road, it is quiet inside the mosque, but there is still something like movement: the sunlight travels over the walls. This, in turn, is intended to integrate the faithful into the rhythm of time, which in Islam is structured by prescribed prayers at dawn, noon, afternoon, sunset and evening. 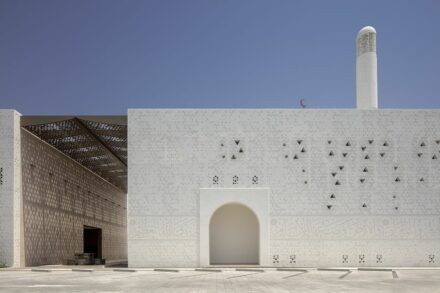 The buildings of the mosque are divided into two parts: one with the prayer hall for a total of 1000 men and women, respectively, and a smaller one with the stations of purification as well as the living quarters for the Imam and for the Moazen who calls the prayer times. 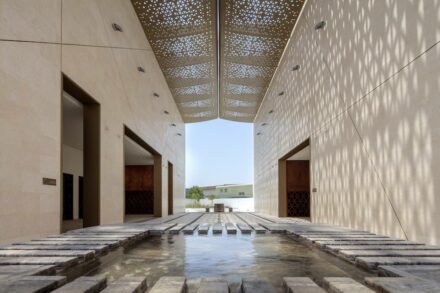 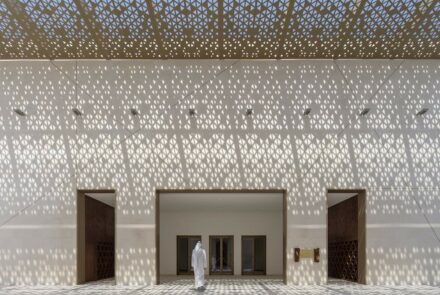 An open corridor under a perforated roof connects the two parts.

The mosque was also intended by the clients as a gift to the community of Al Quoz. Sumaya Dabbagh generally tries to realize references to the site in her buildings. In this case, it is the materials: for the cladding of the exterior facades, she chose light-colored limestone from Oman. The ceramics came from the United Arab Emirates, which includes Dubai, as did the other materials, such as concrete and metal or like wood.

Sumaya Dabbagh graduated in architecture from the University of Bath in England and then worked in London and Paris. “Her return to the Gulf region in 1993 was part of a quest to gain a deeper understanding of her own identity, a unique mix of influences and sensitivity towards both western and middle eastern cultures,“ as she writes about herself.

“Through her work in architecture and design in the Gulf region, Sumaya aims to bridge cultural and gender gaps and has broken stereotypes and limiting beliefs about Saudi Arabia, the Gulf, and Arab Women,“ it continues. And “Sumaya is one of only a few Saudi female architects of her generation and amongst a handful of women architects leading their own practice in the Gulf region.“

One of her current major projects is the Al Ain Museum in Saudi Arabia, scheduled for completion in 2023. Her design for the Mleiha Archaeological Centre in the emirate of Sharjah had been nominated for one of the Aga Khan Prizes for Architecture in 2018 and had won one of the Architecture Master Prizes in 2020.