Exhibition with works of Italian artist Jago until July 03, 2022, at the Palazzo Bonaparte in Rome 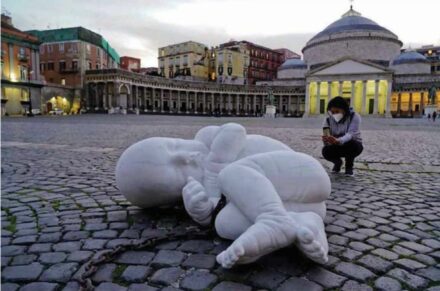 The Italian Jago is a young star among marble sculptors. His works are sometimes provocative, sometimes subtle, but always treat the topic from an unusual perspective. The Palazzo Bonaparte in Rome will show a dozen of his current works until July 03, 2022. A special feature is that the artist himself will be working on a large sculpture at the museum.

In November 2020, during the Corona pandemic, citizens of Jago’s home of choice, Naples, found a white marble sculpture of a chained baby on the pavement of Piazza del Plebiscito one morning. “Look Down“ was the work‘s title – a corruption of the term “Lockdown“, meant as a prediction that society’s most vulnerable would be hit hardest by the pandemic. The work is now installed in the Al Haniya desert in the Emirate of Fujairah.

Many of Jago‘s works revolve around religious themes, such as the two sculptures of Pope Benedict XVI: the first work shows a bust of the church leader in an ermine coat and in prayer, inspired by Adolfo Wildt’s portrait of Pope Pius XI. The work was presented in the Italian pavilion at the Venice Biennale in 2011 and awarded the Pontificate Medal a year later. After Benedict resigned, Jago revisited the work, stripping the sculpture down to the bare torso of an older man. “Habeamus Hominem“ (We have a man) is what he now called the work: the artist showed the representative of God who had become human again. 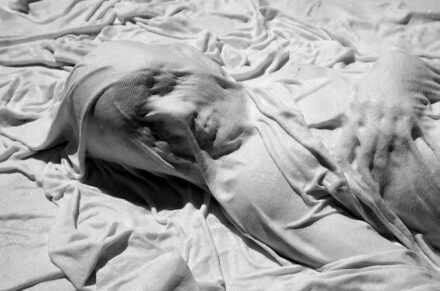 Also on view in the exhibition is “Il Figlio Velato“ (The Veiled Son). The model was the figure of Christ by Giuseppe Sanmartino as a symbol of tragedy and timeless pain. Jago created the work in New York in 2019 and had it placed in a church in Naples as a commentary on the cruelties of the present. Here Jago used a block of Danby marble from Vermont instead of the usual stone from Carrara.

He is quoted as having taught himself the know-how to work on the stone. He broke off his studies at the Academy of Fine Arts in his hometown of Frosinone without graduating. Since his 1st solo exhibition in 2016, he has lived and worked in Italy, China, the United States and the Emirates. He was awarded the “Master of Stone“ at Marmomacc in 2017.

His real name is Jacopo Cardillo. A trademark of his working method is that he seamlessly documents the creation of a work and makes it accessible in videos on the web.