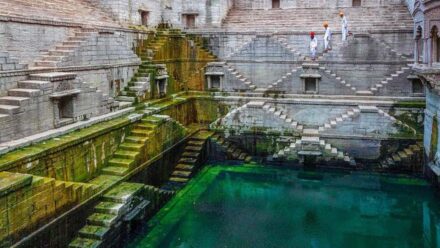 Wells are holes in the ground all over the world that led down into the depths, which are generally walled off and from which water is raised to the top. In the arid regions of western India, however, there are what are known as stepwells: they are marvels of architecture where stairways lead down to the water over sometimes ten levels (30 m). They are usually masoned of local sandstone and ornamented with exceedingly rich decoration.

A 2018 survey concluded that there are about 2800 such stepped fountains throughout India. They are called baoli or baori in Hindi and vav in Gujarati, according to a 2021 BBC feature.

They are also examples of how people long ago knew how to manage the scarce resource of water. 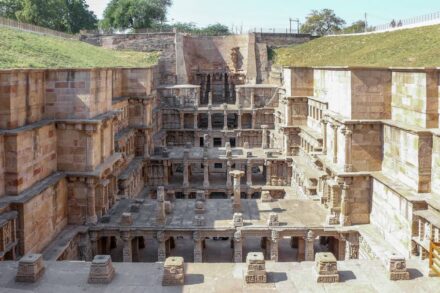 Among the most famous is Rani-ki-Vav, the “The Queen’s Stepwell” in Patan in Gujarat state. The site was added to Unesco’s World Heritage List in 2014. The decor of the complex pays homage to the goddess of water and includes more than five hundred larger and over one thousand smaller sculptures that have references to faith, but also to the everyday life of the people or even assume themes from literature.

The steps into the depth are made in geometric perfection on three sides of the complex. On the fourth side, the walls are extended into pavilions with columns. The splendor of sculptures is overwhelming, including graceful depictions of young girls combing their hair, adjusting their earrings, or looking at themselves in the mirror.

Experts suggest that such motifs date back, among other things, to the fact that fetching water was one of the women’s tasks.

In many stepwells, the lowest level also served as a social gathering place. The temperature there is often five degrees or more below the sweltering heat on the surface.

It has been handed down that those religious rituals were held at the bottom of many stepwells. 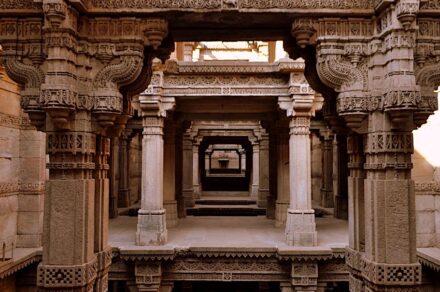 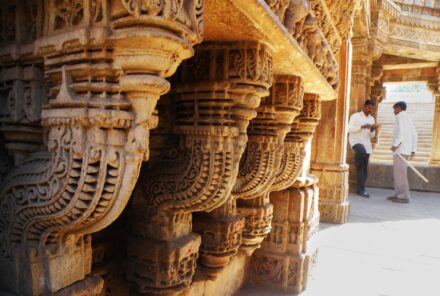 Numerous step wells in the urban area of the capital New Delhi nowadays serve people as swimming pools. But even here, comparable to bathing in the Ganges, the water has an important religious significance, according to a video.

It is assumed that the stepwells originated from simple ditches that were originally cut through the landscape for water management.

There are two types of step wells, those with basins on the surface and those with a reservoir at depth.

Those in the depths are not seen – in front of the hiker, the shaft suddenly opens. In some of them, there is a slope at the very top around the rectangular walled well, which ensures that rainwater is not washed down into the depths together with the soil.

This is because the arid regions of India have a monsoon climate: it is dry all year round, but during the months of summer it pours like from bathtubs.

Many of these stone buildings, the most unusual in the world, are dilapidated or on the verge of decay. An important book on the subject is “Vanishing Stepwells of India.“ In it, the two authors picturesquely refer to the stepwells as “gates to the underworld.“

International Journal of Research in Engineering, Science and Management (2019)