Art history worldwide: the labyrinth as a predetermined path to a destination with numerous twists and turns, and the maze as a deliberate misdirection 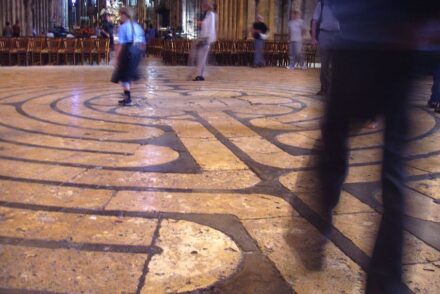 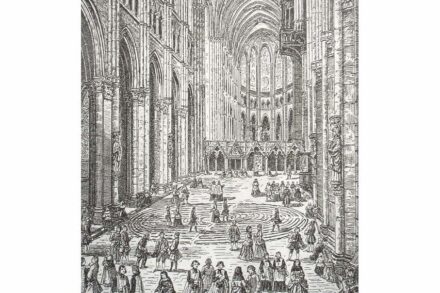 Stone slabs or pavement, respectively green hedges or grass are the preferred materials

Labyrinth and maze are among the most fascinating ideas of humankind. They exist essentially in two materials: in stone, usually laid out on a floor as a mosaic, or with plants in the form of hedges higher than a man. This brief description already reveals the essential difference: Labyrinths want to show a way to a goal, but it can be very convoluted; mazes want to lead astray and expose people to the feeling of uncertainty for a certain time. 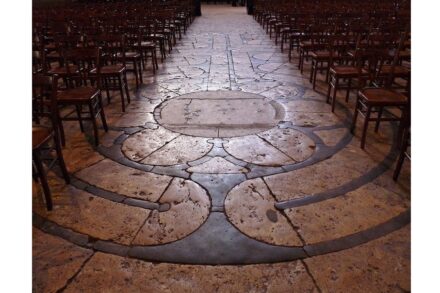 The labyrinth in the cathedral of the French city of Chartres is famous (photos above): on a large area in the central nave, from one side to the other, the path on which people can reach the kingdom of heaven is symbolically marked out with different types of stone.

That is to say: on some days of the year when the benches are cleared away and the labyrinth is openly accessible, believers can go praying or meditating on their knees on a symbolic pilgrimage exactly 261.55 meters long, leading them to Paradise.

In ancient descriptions, reference is made to that labyrinth on the island of Crete, which Daedalus, the ingenious engineer, and artist, had built for King Minos – in the center was imprisoned the bloodthirsty bull Minotaur.

Numerous entertaining legends are related to this complex: it was so cleverly designed that after its completion even Daedalus almost did not find his way out; when the hero Theseus set out to kill the evil Minotaur in the center, he subsequently needed the silken thread of the princess Ariadne to find his way again.

Another famous stone floor labyrinth existed in the French cathedral of Reims. It was destroyed in 1779 by religious zealots who, one of the stories goes, were bothered by children playing between the lines on the floor during services. Supposedly, the labyrinth was made of particularly soft stone, the wear of which told how many worshippers had made their way to the center there, sliding on their knees.

While only a drawing of the labyrinth in Rheims has been preserved, the one in Chartres has been imitated worldwide.

One can be found in the lower church of the Feodorovsky Cathedral in Saint Petersburg, Russia: it is seven meters in diameter and is made of Chios and Crema Nuova marble.
Another is a paving mosaic outside the cathedral in Magdeburg, Germany from 2012. The church is as old as the one in Chartres.
https://bloggermymaze.wordpress.com/2012/05/09/einweihung-des-magdeburger-domplatz-labyrinths-am-5-mai-2012/ 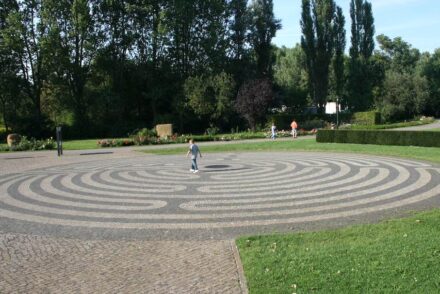 There are countless other pavement labyrinths around the world, and another one in Germany can be found in the “Gärten der Welt“ (Gardens of the World) in Berlin. Here are exact figures for the path: “After 11 turns, 28 hairpin bends, and about 10 minutes, you’ll have reached the center,“ promises the webpage.
https://www.gaertenderwelt.de/gaerten-architektur/themengaerten/irrgarten-und-labyrinth/

Grass and flagstone are the materials of the labyrinth at Armenian Heritage Park in Boston, MA. It commemorates the genocide of the Armenians in the Ottoman Empire.
https://www.armenianheritagepark.org/

Examples of labyrinths made of stone can be found in a video on the site of the Spanish Centro de Cultura Contemporanea Barcelona (CCCB). The exhibition “Through Labyrinths“ was shown there in 2010.
https://www.cccb.org/en/exhibitions/file/through-labyrinths/33520

Labyrinths are undoubtedly spectacular, which is why they are occasionally found at trade fairs. At Marmomacc in 2010, one such place was on display as part of the Marmomacc Meets Design presentation, staged by Portuguese architect Manuel Aires Mateus in cooperation with the Italian company Pibamarmi. 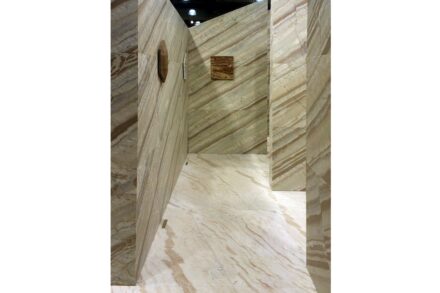 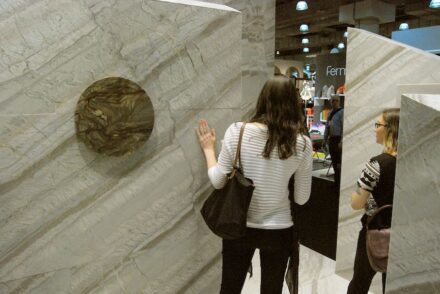 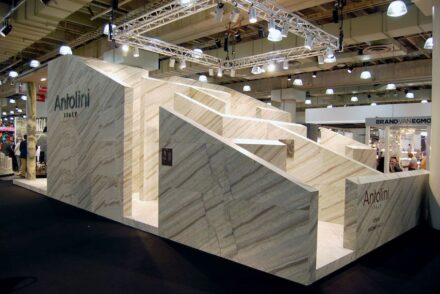 At the ICFF fair in New York in 2015, designer Antonio Facco created an installation for the Italian company Antolini, where winding paths allowed visitors to get very close to the stones and their surfaces.

This brings us to art, specifically: land art. Here, stones are often laid out in intricate arrangements in a field or on a beach. Well-known and enduring examples can be found on the Scilly Isles in the English Channel.
https://www.worldwidewriter.co.uk/stone-labyrinths-of-the-scilly-isles.html
https://www.labyrinthos.net/C47%20Scilly%20Troytowns.pdf

From here, the mental path is not far to the mirror labyrinths that like to make visitors run into the walls, and to those structures in cornfields that like to appear together with crop circles at harvest time.

We recognize: Fun and games are part of the labyrinth these days. This also applies to the maze.

Probably the most famous maze in the world and also one of the oldest is that of Hampton Court Palace near London. It was built around 1700 and is an example of the English garden art of that time. The 2 m high green hedges of 1225 yews are “famous for confusing and intriguing visitors with its many twists, turns and dead ends”, as it says on the webpage.

It should take about 20 minutes to get from the entrance to the center, where a lookout point offers an overview of the site. Reassuring is the promise on the webpage that all visitors found their way out again. 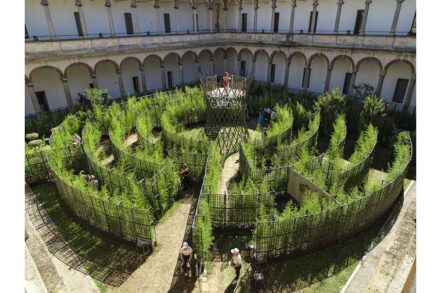 In 2022, for the FuoriSalone in downtown Milan, there was an art installation by the industrial designer Raffaello Galiotto, about whose work with natural stone we had often written. He had created a maze in one of the courtyards of the Università Catolica, to be understood as an expression of the uncertainties in the present and as a symbol of humanity’s search for new paths to peace and health. Only materials that came from recycling were used.
https://www.galiottodesign.it/en/?evento=nardi_interni2022