Dr. Carlo Montani: the global natural stone sector has also come through the Covid-19 pandemic with flying colors and is looking to a rosy future 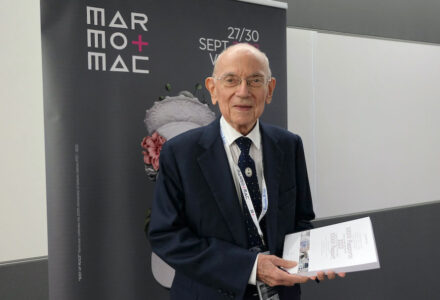 By 2025, the old master of numbers expects consumption to quadruple compared to 1996

The 2021 numbers for the natural stone sector worldwide are positive, both looking back and looking ahead. If, as a journalist, one annually presents to readers Dr. Carlo Montani’s bilingual statistics yearbook (“XXXIII Rapporto marmo e pietre bel mondo 2022 / XXXIII marble and stone in the world 2022“, it is, therefore, a bit like turning a prayer wheel: production compared to the previous year has risen again, so has the global trade, and for the future, the prospects are also rosy: by 2025, the old master of figures expects a quadrupling in consumption compared to the 1996 value, that is, about 15% annually.

Let’s adjust to this situation and therefore, this time in our report, we’re not reproducing those figures at which the prayer wheel routinely turns, but those at which it jerks a little.

Because within the heavyweights of the industry, there are clear shifts that have been apparent for some time.

China, India, and Turkey are still the 3 big fish, accounting for more than two-thirds of global production.

But what happens with these quantities is now very different:
* China uses much more stone than before in its domestic market and is by far the world’s largest consumer of stone; the association there sees low quality among installers and stonemasons as an obstacle to further growth;
* in terms of exports, China has fallen to 3rd place (with 6.6 million t in 2021) after India at the top (15.5 million t) and Turkey (7.76 million t) in 2nd place;
* followed by Brazil (2.6 million t), (Italy (2.3 million t), Portugal (2.1 million t), Spain (1.8 million t), and Greece (1.0 million t);

For the major importing countries, the order is as follows:
* outside Europe: China, USA, South Korea, India, Taiwan, Canada, with China importing only ingots, the others almost only finished products;
* in Europe, the largest buyers abroad are Germany, France, Italy, Spain, and Belgium. 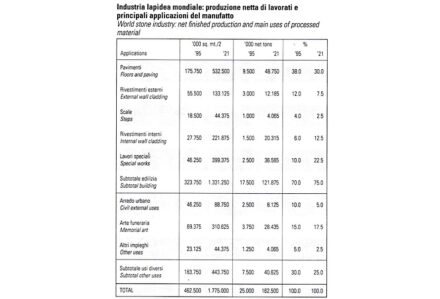 This time we want to highlight two things:
* first, of Montani’s tables dedicated to the use of stone. The figures are fuzzy because averaged over the whole world, but on a national level there are only two consumer surveys so far.

* in Montani’s considerations, the global trade in natural stone plays an important role. Maybe there will be a change in the near future because capitalism seems to turn in a new direction: the external costs of the products are included in the Life Cycle Assessments, i.e., the costs that the products cause for nature, climate, and people.

This is positive for natural stone, but it also means, for example, standard tiles made of standard stones are consumed on the continent where they were quarried and processed. Only exotic varieties and unusual design products are transported worldwide.

Finally, allow us to digress a little: a Brazilian instrument called cabasa is reminiscent of a prayer wheel. We could not resist the temptation to a few links to get back into the swing of things after all those numbers. 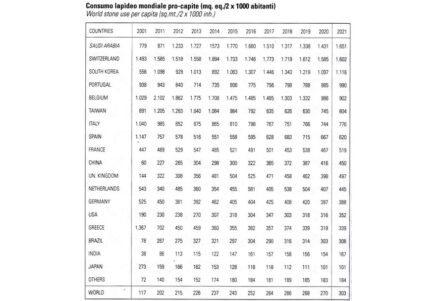 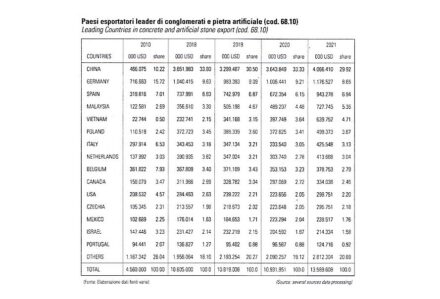 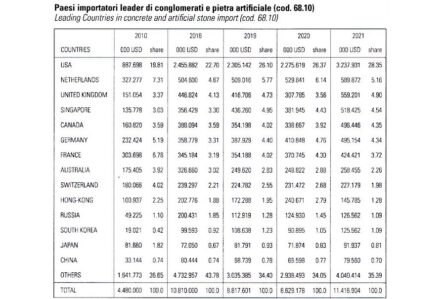