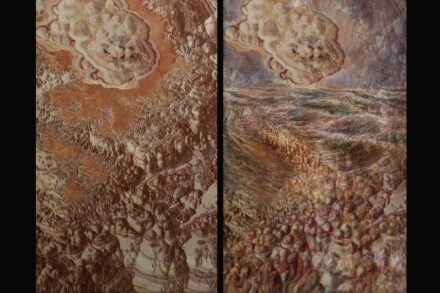 “The hidden art of nature“ is the slogan of the company ALMA Art, written out: Accentual Light Mapping Art. The name Alma refers to the word from Aramaic meaning “earth“; in many modern languages it means soul. The two founders Jay Zelingold and Arin Jéda do in an artistic way what everyone has seen when looking at exotic natural stones: they let the veins and structures perform their magic until images emerge from the lines and colors.

This doesn’t always work, and you have to get involved with the inspirations, but sometimes the associations are simply there from the start.

The two have developed this game with human perception into art with an event character: they transform inspiration into a real image, which they gently lay over the stone during demonstrations. In such fade-ins, the inspiration gradually forms out of the image, and everyone sees it – after fading down, it remains in front of the viewer’s mind’s eye for a while. Sometimes it is even constant.

Arin liked to lose himself in such inspirations when looking at painted walls as a child, the webpage says. “No one else seemed to see the scene he saw. Instead, they mocked him,” the company story continues.

Eventually, he was able to get Jay excited about the idea, and it took them 7 years to turn it into a product and make it marketable under the name “Fine Stone.“ 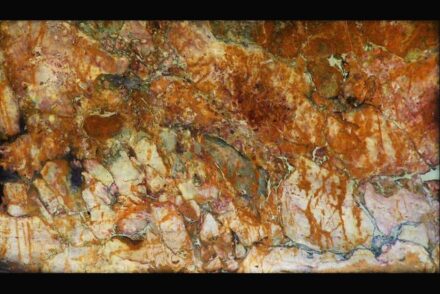 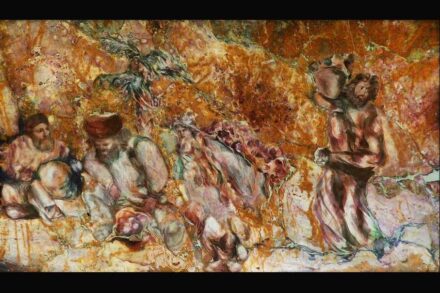 The vision of ALMA began in 2015 by artist Arin Jéda. In 2016 Jay Zellingold joined and spent two years developing the process with Arin. Jay launched ALMA privately in 2020, and in the summer of 2021 ALMA was launched commercially.

Since it is less about their own creativity and more about making the artworks of nature visible, an essential part of their work consists of looking for hidden images at endless rows of stone slabs, especially those of onyx, marble or exotic granites.

The webpage continues: “Jay lives near New York City where he directs and conducts the ALMA Studio together with his team of artists and technicians. Arin runs a creative marketing firm he started years ago, yet continues to provide Jay and his team with signature stone masterpieces he finds, himself mapping the art of select works… Jay and ALMA Studio look forward to sharing their work with the world and are keen to partner with art institutions and businesses interested in bringing this unique experience to the public.“

We add from the point of view of science: the inspirations that make the two visible are connected with a peculiarity of human perception, namely that it actively and of its own accord seek meaning or a statement in what it sees. In other words, the eye presents the image to the brain and receives an interpretation from there.

Perhaps it is the other way around, that the brain constantly sends the eye in search of impressions to be able to interpret the world – we don’t know. 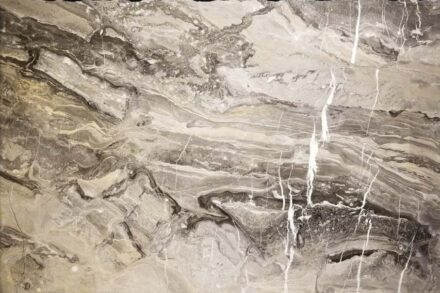 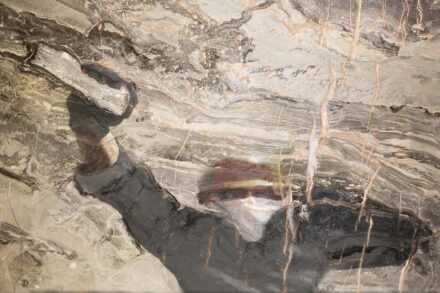