The Portuguese sailors on their voyages of discovery to India had prefabricated stone pillars on board as rulers’ signs to be placed along the coasts, presumably also as ship’s ballast 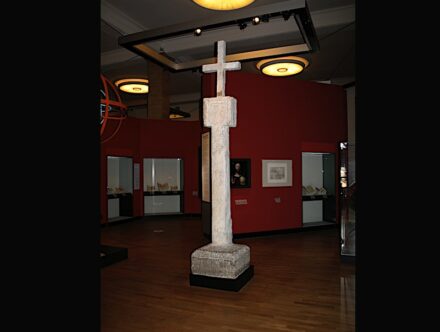 Raw blocks of stone or other stone loads often served and still serve as ship ballast. This is because the material is heavy, so it can reliably stabilize a watercraft deep down in the ship’s belly and can also be sold at its destination. The first tombstones from India are said to have come to Great Britain this way, which then conquered the European cemetery market in the 20th century.

In the opposite direction, large stone pillars traveled in the bellies of ships as early as the 15th century, when the Portuguese sailed south along the coast of Africa, hoping to find a passage somewhere to the Spice Islands far to the east.

Padrões (singular: padrão) is the name given to these prefabricated Portuguese limestone and sandstones on great voyages.

Primarily, these armorial stones were signs of land seizure on a coast: with the erection of the pillars, the Portuguese captain and his crew declared that they had landed at that point on a certain day and that they were taking possession of this terrain for their king in Lisbon.

The front side of the column had the king’s coat of arms carved in an extended area at the top. The other sides bore the message. We reproduce the one from the Padrão de Santo Agostinho, erected by the navigator Diogo Cão in August 1483 at what is now Cabo Santa Maria in southern Angola: “In the age 6681 after the creation of the world, the year of the birth of Our Lord Jesus Christ 1482, the Highest, our very excellent and powerful prince and King Dom João II of Portugal, had this land discovered and this column set by Diogo Cão, squire of his house.“ 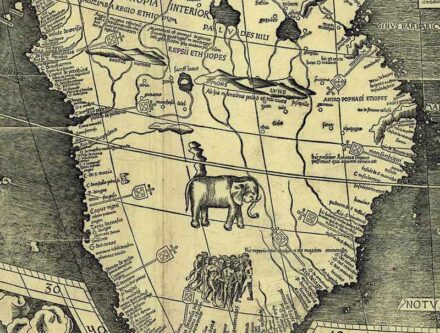 Presumably, the erection of such columns was a common occurrence. In any case, the Padrão de Santo Agostinho mentioned was the second of a total of four that Diogo Cão moved during that trip.

Documents show that numerous others were placed along the east and also the west coast of Africa, this by famous names of navigation such as Bartolomeu Dias or Vasco da Gama.

Later, the Portuguese also erected armorial columns as political monuments, for example in Cananéia on the coast of present-day Brazil as a reminder of the Treaty of Tordesilhas.

The fact that the Portuguese had come to the coast of South America at all by Easter 1500 was in turn connected with their search for a sea route to India: at that time it was clear that sailing south along the coast of Africa was too arduous because of the powerful Benguala Current coming north there; but it was also known that there was a circular motion in the sea in the South Atlantic, so that if one first sailed west, then turned south and returned east in a wide arc, one would reach the southern tip of Africa with comparatively little effort.

“Volta do Mar,” return from the sea, was the name given to this ingenious maritime idea.

By the way, the same circular motion exists in the North Atlantic: if you sail from the Azores towards the Caribbean, for example, you will come back north from there with the Gulf Stream along the coast of today’s United States and return to Europe. One can assume that Columbus at least suspected this when he was looking for a way to India in the service of the Spaniards.

He tried westward, and was successful earlier than the Portuguese, who tried eastward.

In any case, among the Portuguese crews on board at that time must have been people who could inscribe a stone with a hammer and chisel. Lifting the heavy padrões from the belly of the ship was probably a procedure that everyone on board knew and mastered.

The example of the coat-of-arms stones shows once again how professionally organized the voyages of discovery were at that time. 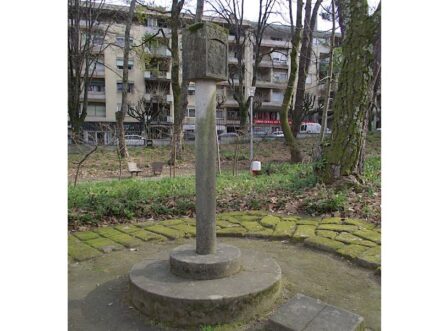 Research on the 500th anniversary of the discovery of Brazil has shown that, although the risks involved in such voyages were extremely high, a ship that returned from Asia fully loaded with spices yielded, in today’s terms, an extreme return: according to the precise rules of remuneration, even the simple ship’s boy was left with so much revenue that he was a made man for the rest of his life.

Provided he did not lose all that money on the way home to his family.

And: if the journey was blessed with a return at all. For even sailing around the southern tip of Africa on the way there was a matter of life and death.

On the other side of the Atlantic, the proverbial Cape Horn stands for terrible weather, which demanded a superhuman struggle against the forces of nature from the crews of the nut shells of the time to circumnavigate.

The Cape on the African side is just as bad and was therefore called Cabo das Tormentas, Cape of Storms, by the Portuguese sailors. The Portuguese king, however, later decreed that the name Cabo da Boa Esperanza – Cape of Good Hope – was better suited for the gateway to the great riches of the Spice Islands.