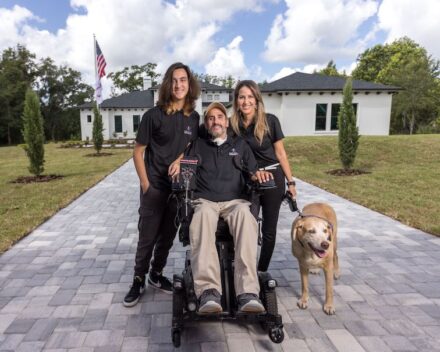 Romy entered the U.S. Army at age 19. During his deployment as a Warrant Officer, he was second in command of his ODA (Operational Detachment Alpha) and conducted combat operations in Western and Eastern Afghanistan. In September 2008 as part of a humanitarian mission in Meydan Kalay north of Chalakor Valley, while conducting a combat operation, his detachment was viciously ambushed. Romy was severely wounded after sustaining a gunshot wound to the back of the neck which paralyzed him from the neck down. He was medically airlifted to Bagram airfield and once stabilized was moved to Landstuhl, Germany before coming back home and being placed at Walter Reed National Military Medical Center in September 2008. While at Walter Reed, doctors determined that his C3 vertebrae had been shattered and had to be extracted. His breathing was tied to a respirator, and he was paralyzed from the shoulders down.

In June 2015, Romy and his wife Gaby founded Stay in Step Spinal Cord Injury Recovery Center based in Tampa, Florida to serve returning service members and veterans with spinal cord injuries and neurological disorders that cause paralysis. Their aspirations are to build a new pilot center complete with an underwater treadmill, basketball court, cafeteria, kids room, and family room. The center will also address healing the mind and soul.