Exhibit in Knoxville about once famous East Tennessee’s Marble Industry 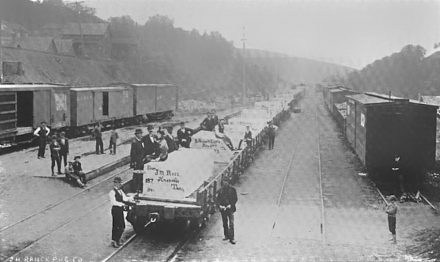 „Rock of Ages: East Tennessee’s Marble Industry” is the title of a new exhibition by the East Tennessee Historical Society in Knoxville. It offers a first-time look into the industry that launched this natural stone’s fame and crowned the town as „The Marble City”. The exhibition is on view through April 30, 2017.

The marble industry was once an important sector of East Tennessee’s economy, and still today the stone is popular.

By the mid-1850s, East Tennessee marble from Knox County had been chosen for the interiors of the Tennessee State Capitol and marble from Hawkins County was being installed inside the new House and Senate wings of the United States Capitol. In the decades that followed, the varicolored stone (best known is pink) was used for the interiors of a variety of public buildings like state capitols, courthouses, city halls etc.

Tennessee marble would soon also be ordered for high traffic railroad terminal flooring across the United States and Canada.

In the 1870s, with the example of Knoxville’s new Custom House, the marble became known for its strength and durability as an exterior stone.

Reminders of the once prominent Tennessee marble industry can be seen today, in late 19th, early 20th century buildings in Knoxville on Gay Street and other corners of downtown, in building facades, steps and entranceways, and interior lobbies. The Post Office and Federal Building on Main Street is a particularly fine example dating from the 1930s.

Knoxville continues to embrace its marble heritage in modern buildings. „Notice how seamlessly the new three-story East Tennessee History Center adjoins the original Custom House and how the exterior marble of the contemporary Knoxville Museum of Art brings the building’s formal geometry to life,” East Tennessee Historical Society writes in a press release.

The exhibition includes more than two dozen artifacts and numerous photographs and illustrations representative of Tennessee’s unique stone story. Given are also details about the different quarries and what can still be seen. (evma)