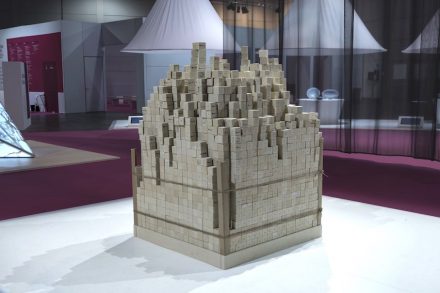 If projects fail to meet the mark, the participants often try to save face by underscoring the results with impressive descriptions aimed at increasing their sense of purpose: the texts are little more than wordy elocutions, elaborately describing the work of art with in-depth reference to the historic origins.

Case in point: „Soul of City“ at Marmomac’s Hall 1. Great expectations: seven international design studios and architects were invited to present their ideas for cities of the future showing the role which natural stone could play.

The idea originated at the World Architects’ Congress (UIA), which takes place every third year. It was hosted by South Korea and took place in the Capital Seoul (Sept 03rd – 10th 2017). The central theme was how to breathe life and soul into cities and give them a more human face.

So far for the theory. We show the results – most are mere shenanigans or trivialities. We publish the original wording of the descriptions.
The idea accompanying the presentations originated from the Platform for Architecture & Design, Luca Molinari, curator. Italian companies realized the ideas in stone. 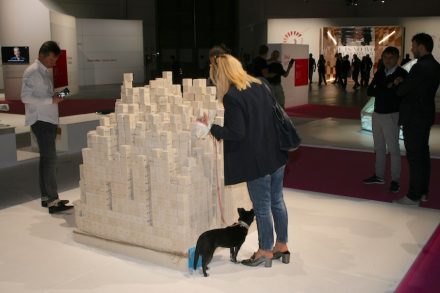 „The Eternity & the Ephemeral“. Studio: Open Architecture; company: Pimar; material: Pietra di Lecce.
The soul of city is eternity, time, sharing, memory, and collectivity. The stone, an ancient building material. A Giant piece from the beginning as a cube of 1.5 m x 1.5 m x 1.5 m, sliced into 8000 small cubes each of 7.5 cm x 7.5 cm x 7.5 cm. Each one being unique, with its own memory and texture from the ancient time of its formation, yet joining together, forming a larger collective whole. Each visitor to the Exhibition can take a micro cube away, to their new space, all over the world, individualized yet linked by the memory of the exhibition. The initial cube … transforms its geometry over the course of the exhibition, as the micro-cubes are taken away, the visitor is the performer, the action is part of the work, and recorded by the time-lapsed camera setup around the cube. 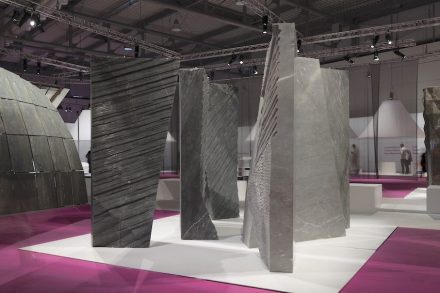 „Walls”. Studio: Alper Derinbogaz; company: Garfagnana Innovazione; material: Bardiglio Vagli, Bardiglio imperiale Orto di Donna, Grigio Argentato.
„Walls” installation question how „fragmentation” develop spaces at various scales from micro to macro. Since Rome, the complex city of the Roman Empire the cities emerged through partitioning by growth and its stratification. The emergence of the „property” started with the „double wall” of Nero, the Roman Emperor which eventually became the basis for the building plots. Similarly we can trace the emergence of marble minerals, which happens through fragmentation and stratification of it. The installation approach the marble as a topographic language by stratifying the crystals on its own with a partitional structure. Also aims to reveal the subdivisons of the marble and the strategy results the texture with thin walls on the surface in a way that simulates the essence of the city at a micro scale. Walls implement a boundary, a representation of space, or even the space itself founded by reconsideration of the wall concept which is the main building-element. 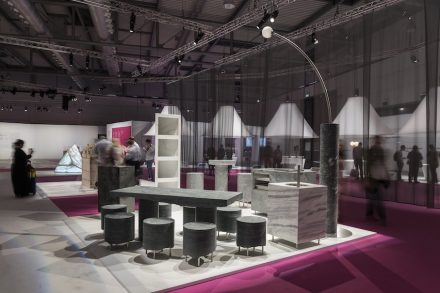 „Outdoor Kitchen Marble Set“. Studio: June14; company: Nikolaus Bagnara, material: Barbecue: Atlantic Stone / Light: Alps Glitter / Table and stools: Pannonia Grün / Shelf: Bianco Lasa Covelano Fantastico / Sink: Bianco Lasa Covelano Venato / High table and stools: Silver cloud / Trash: Mystic Grey Waterjet.
The kitchen is a set of objetcs, each one is a a character. It is ,Equipment’ that creates posibilities for people around them and in dialogue with them. Single elements have a specific functions that our bodies relate to. All together kitchen and people make a family. We build a city of kitchen characters: a barbacue, a smoker, a sink, a street light, tables and seats etc. made out of a durable and noble material. By spreading the program in pieces, the function itself is not related to a specific space but its specific use, and consequently to the user. The activities of preparing, cooking, eating and cleaning are organized around different objects placed in an open and flexible circle. 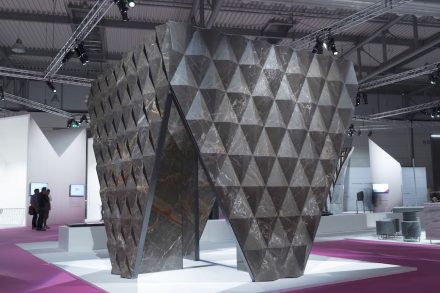 „Everything Flows“. Studio: Sam Jacob Studio; company: Piero Zanella; material: Ombra di Caravaggio, Blu Masaccio, Perlato Angelico, Rosso Mantegna.
„Everything Flows“ is a marble pavilion that explores fundamental architectural concerns of inside and outside. The design begins with an exuded square plan with whose interior is divided with into four equal sections. These cruciform walls are punctured with an arched opening at their intersec-tion to form a vaulted centre space. The outer corners of the pavilion are diagonally sliced to create four openings. These geometric operations create a series of distinct interior rooms which are also interconnected. The varying use of marble – as three dimensional form, as flat polished surface, monochromatic and polychromatic – creates variation in sensation, as if the architecture itself began to take on the geologic quality of stone. Here, the abstracted ,rough’ exterior contains a polished ,cultured’ interior as if architecture was discovered fossilised within the body of the rock like an inside out cave. 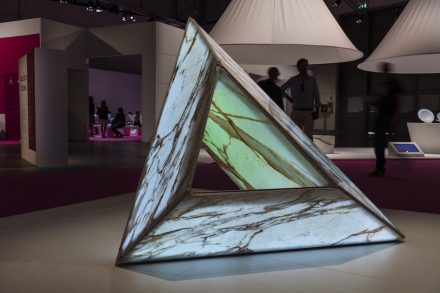 „Marble Star“. Studio: Eduardo Castillo; company: Elite Stone; material: E-Light Marble.
To return to the origin of things with a steadfast gaze that marvels at what is found and contained, may be a beautiful excuse to roam around looking for architecture capable of what poet Jorge Teillier expressed: (…) „What’s relevant is not the light we turn on day in and day out / but that which we turn off every so often / to save light’s secret memory.” To build from a referential image, confusing it with memory in an attempt to convey the tensions concentrated in essential gestures, will allow us to broaden and strengthen an idealized simplicity that, precisely due to its extreme and marginal nature, will awaken a contained architecture, the fruit of its culture, once described by Junichiro Tanizaqui. 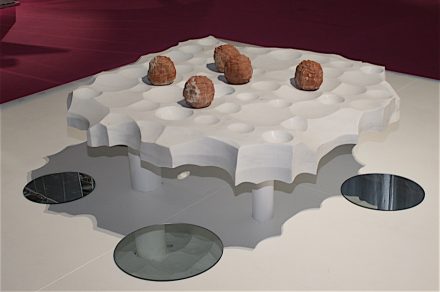 „Ghosts of Future Buildings“. Studio: amid.cero9; company: Helios Automazioni; material: Marmo Bianco.
As in an archaeological garden, the ruins surrounded by formal gardens will be transformed into stable elements, to continuously expand the city. Hence, the gardens will serve therefore as formal and material bases for the future constructions, inverting the arrow of time: reversed ruins of the future. All of them share the simple profiles and geometric operations used in their generation, composed through vertical accumulation of several pieces and based on the intersection of multiple extrusions of simple profiles. The geometry of the buildings themselves is then taken from decorative languages present in archaeological pieces, transformed through classical operations as fluting and emptying, almost like an accumulation of a set of found objects out of scale. The pieces will retain in this process the same formal procedures in the process of being converted from gardens into buildings, resulting in a family of extravagant forms, almost like pop ruins of a near future. 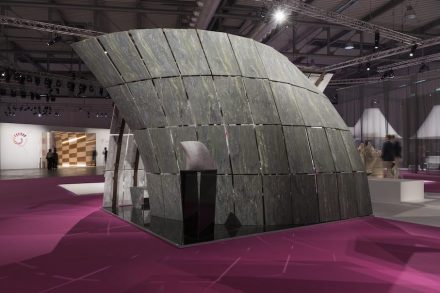 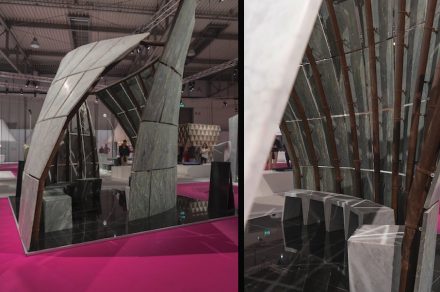 „Embrace“. Studio: Craig Copeland; company: Lavagnoli Marmi; marble supplier: Ca’ D’Oro; material: Bianco Carrara, Verde Picasso, Fantastic Black.
When we embrace … in everyday, in our extreme moments of joy, of despair … we reaffirm and are comforted by our connection to the continuum of family, friends, lovers, and strangers … humanity. The soul of any city lies in all the places where we congregate … to fulfill our social nature … to embrace. The concept for Marmomac’s Soul of the City emerged from the intention of creating an inviting, restful gathering place „embraced” in marble. At the same time, the intent was to express more contemporary ways to shape and lighten the marble defining any place. The primary components of „Embrace” are two convex, concave curving walls of marble – one in Carrara White, the other with Picasso Green. Together they define what is both a passage and seating area. „Embrace’s“ collective figurative form suggests many visual metaphors … walls encircling a public plaza, an ark/vessel, a shake of two hands, an opening and closing tulip… metaphors of invitation, metaphors of embrace.