Makeover of Brunkebergstorg Square in Stockholm: investors want natural stone and are willing to pay for it 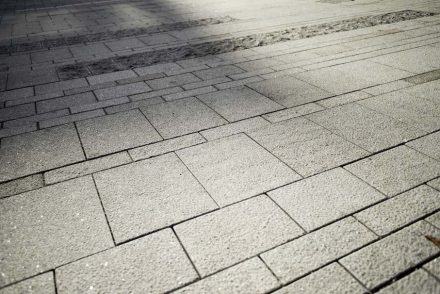 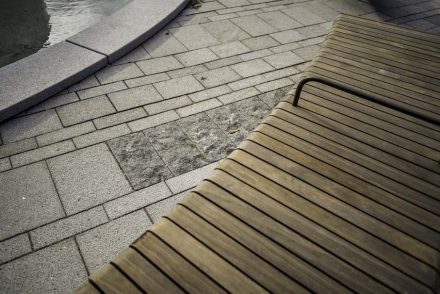 Some elements of the Brunkebergstorg Square situated in the center of Stockholm were unusual: e.g. the funding for refurbishment of the long-neglected site was provided by a hotel on the Square, surprisingly the concept calls for less rather than more green and for more natural stone.

No wonder then, that the Swedish natural stone trade organization awarded the project its 2017 prize.

The result was a sort of showroom for plaza design in natural stone: visitors will find some 5,000 m² local Tossene Gray Bohus granite implemented in a variety of sizes on a myriad of surfaces.

But first let us gain a general overview of the location. Peter Willebrand, editor in chief of the Swedish trade magazine „Sten“, provided the information.

Brunkebergstorg is situated in the heart of Stockholm: a mere 200 m from the Riksdagen, Sweden’s Parliament, and just around the corner of the Ministry of Foreign affairs and the Central Station. The Plaza is also the address of the National Bank and directly adjacent to the superlative shopping mall The Galleria.

In the roaring ‘20’s, the Plaza was a center for distinguished lifestyle. The buildings were smartened up to fit in with the Belle Époque lifestyle.

But the ‘70’s saw a new era and with it new construction guidelines lending the Plaza a whole fresh look keeping in part with architectural brutalism. The years that followed saw the Plaza fall into a state of neglect. 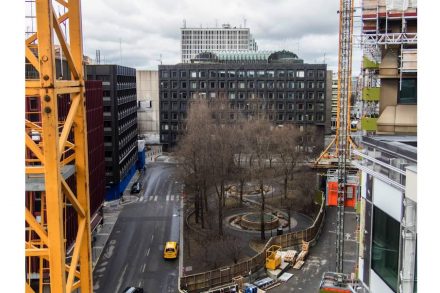 Finally, there was an eye-sore of mighty trees amid unsightly façades reminiscent of a jungle landscape.

The area was rediscovered by investors a few years ago: new hotels ensured, including a posh roof-top restaurant with a view on the plaza. Investors applied pressure on the city to spruce the Plaza surrounding Brunkebergstorg up.

One of the investors was the Swedish AMF Fastigehter Pension Fund, one of the biggest Swedish real estate investors. With Fastigehter the Brutalist buildings morphed into the five-star Art Six Hotel (see link below). The Investor also provided funding for the refurbishment of the Plaza including the extensive implementation of natural stone, which was meant to give the Plaza an air of timelessness.

The city planners and the investors made a joint and concerted effort according to Peter Willebrand as reported in the trade magazine „Sten“: „There was a close cooperation between Åsa Drougge and Evelina Skogelid of Level Landscape Architects and Kristina Menyes Nyman of the city of Stockholm’s planning and building office“.

The women proved their courage by freeing the plaza of sprawling greenery even against the will of a number of protesters and reclaiming the site as a venue of urban terrain. 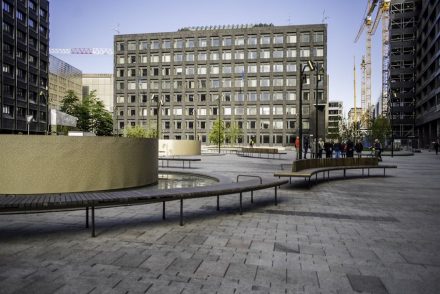 The fountains on and around the Plaza as well as the lighting and seating were given a modern design, better form and some more. 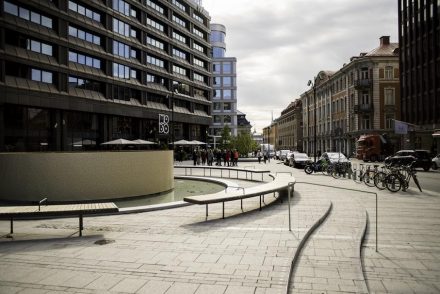 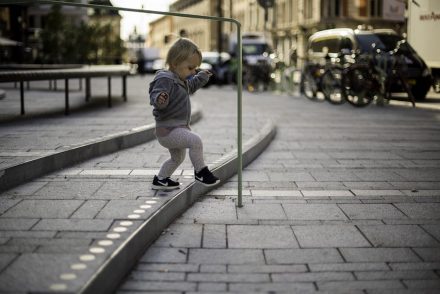 Cobble-stone paving with the local grey granite lends a distinguishing look particularly since stone of a variety of sizes and surface structures from bushhammered to flamed was used. The variety makes for a „subtle“ yet „vibrating“ overall appearance according to the trade magazine Sten. 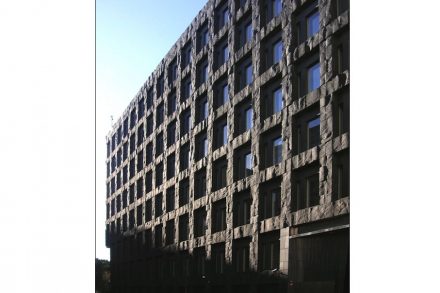 The result is a welcome contract to the stern diabase patterns. The building is as famous as it is controversial in Sweden.

Stone was provided by Hallindens Granite, paving by SH Bygg.

There was very little time between planning and roll-out as the plaza was supposed to be finished in time for the grand opening of the hotel. The goal was achieved.

The next step is to integrate Brunkebergstorg in the urban development with the help of the same type of granite.