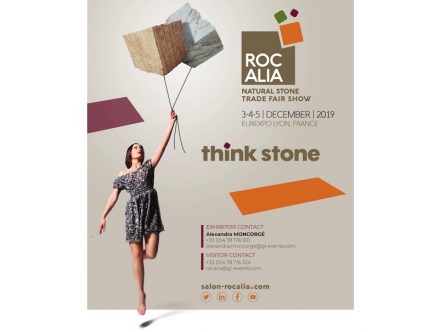 New, too, are the strong efforts to solicit tradespersons from neighboring countries around France

„The year is 50 B.C. Gaul is entirely occupied by the Romans. Well not entirely!“… everyone knows this famous introduction to Asterix and Obelix comics which we borrowed to draw attention to France’s singularity at the Rocalia Trade Fair, Lyon (December 3rd – 5th, 2019): Organizers have taken the bold step of admitting only natural stone to this, its 2nd edition.

We read the news in Pierre Actual (January 2019) where the reasoning behind the decision is explained: not all materials are to be excluded, merely those of non-natural origin.

Editor in Chief Claude Gargi commented the decision with great glee and wrote: „Respect to those who are willing to defend natural stone.“

Whether or not to allow Engineered Stone or Quartz composites has moved Organizers of Trade Fairs ever since the man-made materials have cropped up en masse some ten years ago. Most stonemasons already work with the material. The reason: customer demand.

Also, the materials can be worked with the machines at hand already used for working natural stone.

But in France – as in the tiny Gallic village – there is a vociferous faction unwilling to have anything to do with the newfangled material. No question that the group has found consent in the quarries.

Rocalia hopes to modify its profile in yet another field: more than ever before, „foreign tradespeople are being solicited, particularly from countries bordering on France“ according to Pierre Actual. An event in cooperation with Euroroc, the umbrella Trade Organization, is planned.

As was the case two years ago there will be a colorful accompanying program to the Fair. Natural stone innovation will be a point of emphasis. It is hoped that architect Giuseppe Fallacara will erect an unusual construction as was the case with his „Flux“ vault two years ago.

Natural stone design will be part of a special presentation and figure prominently at the exhibitors’ stands.

Dedicated to the theme heritage and preservation, a one day guided tour through the Grand Hôtel Dieu de Lyon has been organized. The building looks back on a 900 year history and is a magnificent historic natural stone building.

Rocalia was christened in 2017 when the Lyon Fair Organizers got together with Pierre Actual. The name is derived from the gardening and landscape fair Paysalia which is held back to back with Rocalia in a neighboring hall.

The Fair’s first edition was convincing: 125 exhibitors and 14,580 visitors attended. Note that not only machine and tool producers attended, but also stone producers.

Quarry owners and stone producers are a dying breed at many other national trade fairs. They have found a new domicile at architectural and design fairs.