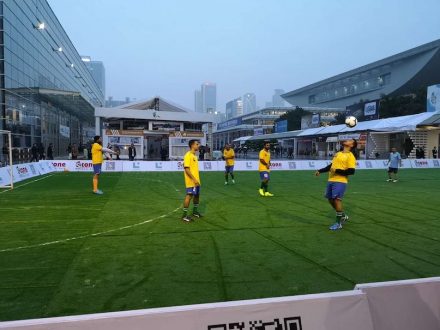 This year’s Xiamen Stone Fair saw again the Lundhs Soccer Cup on the late afternoon of the 2nd day when international stone-teams competed on the fairground. Participants were the teams „Samba“ (Brazil), „Vikings“ (Norway), „Dragon“ (China) and „Shi Shan Ban“ (China). The list also gives the result – like in the year before, the Brazilians came in on first place. The event was initiated and is sponsored by Norwegian company Lundhs.

The stonemasonry school Klesarska Škola in Croatia has published the program of its symposium for international craftsmen on May 17th to 18th 2019. The event will be part of the festivities for the school’s 110th anniversary.

Speaking of the fire in Notre-Dame: On 9 July 1984, a lightning bolt had set fire to York Minster’s roof causing £2.25m worth of damage. 30 year later, the BBC recalled the event in a report.

The season is on for stone sculpture symposia. Information where application is open can be found in our worldwide calendar of such events.

The International Surface Event (TISE) held annually in Las Vegas, USA will have an affiliate in Shanghai, China in December 11-13, 2019 called The Surface + Design Event China. Please find the link in our calendar of stone fairs. 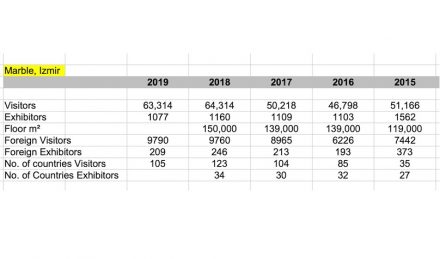 The stone fair Marble in Izmir held its 25th anniversary this year (March 27-30, 2019). It had begun in the Kültürpark in the City Center with 47 regional exhibitors and some 4700 visitors. Our table shows the development since it moved to the new fairground in Gaziemir district. This year, the program comprised the 2nd World Stone Forum (which will be named World Stone Summit in the coming year) and the 5th International Stone Congress. We will soon report about the fair’s design initiative. The dates in 2020 will be April 01-04 (1, 2).

„The Granite“ was the name of a building on West Riverside Ave. in Spokane, Washington erected after the Great Fire of 1889.

A video shows a young man almost hit by slabs falling from a building.

„Onix“ is the name of Chevrolet’s best-selling car in South America. It will soon be introduced to the Chinese market.

Designer Sophie Rowley uses Jeans fabric plus resin to create a material looking a bit like marble from far.

In Germany, 776 hotels will be newly built, rebuilt or expanded in the next 3 years. The main locations are Hamburg und Berlin (German).

Artist Carla Daturi creates mosaics made of semi-precious stones and gilded glass pieces for its „Precious Walls“. The may be backlit and are decorations ideas for the interior.

In Uganda, poor people quarry marble from Mount Moroto. The natural stone is used for cement production, a webpage reports.

Video of the Month: Kaspars Apšs is a stonemason from Latvia and the founder of „Rūjakmens“ workshop. Since more than 20 years, he has been working mainly with granite and expresses. In a video, he expresses his passion for the material and the craft (1, 2).