Terrazzo is also turning to product design and three-dimensional uses 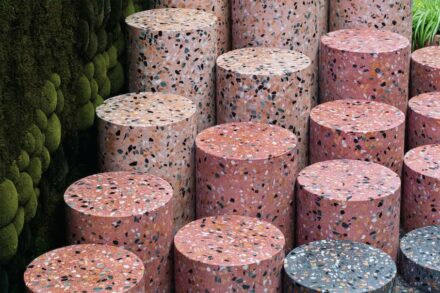 At the Surface Design Show in London in February 2020, the designers of Mizzi Studio presented a “Terrazzo Garden“ commissioned by the companies Vivalci and Halmann Vella

“Terrazzo Garden“ was the name of an installation that showcased terrazzo as a material at the Surface Design Show in London in February 2020. Mizzi Studio designers wanted to demonstrate that “terrazzo can be created in sheet form or as a bespoke 3D object,“ according to a press release. 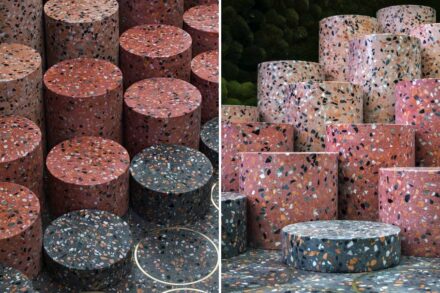 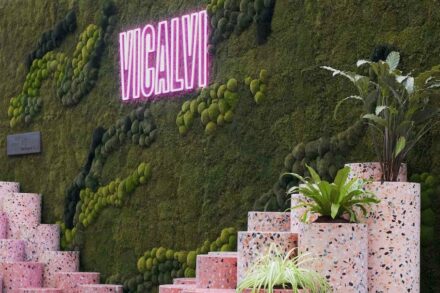 Thus, this time-honored flooring made of small stone chips with a cement bond is also treading the path towards multiple uses on walls or in product design.

Commissioned by the companies Vivalci and Halmann Vella, the designers had set up several rows of ascending columns. The individual pieces had been water-jet cut from blocks of the material. The color spectrum ranged from dark to light in 5 tones, with the columns at ground level only indicated by metal rings. 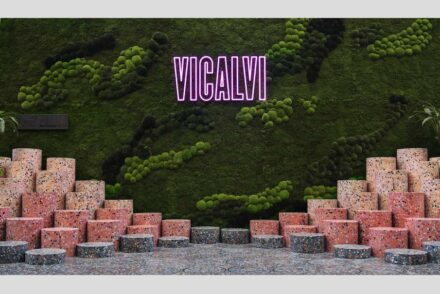 The background imitated a natural environment with moss. Small highlights were real plants, for which the columns became flower boxes.

The goal of the installation was to “show the versatility, tactile quality, and aesthetic appeal of terrazzo,“ according to the companies.

After the show, the installation moved to Vivalci’s showroom in the Clerkenwell neighborhood. 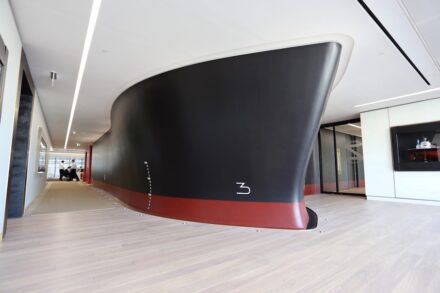 We quickly point out another work by Mizzi: for a shipping company, the studio had designed the entrance area to their headquarters in the form of a ship’s hull.