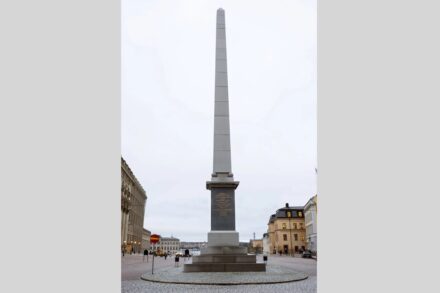 A truly monumental project has been awarded 1st place by the jury of the Swedish Natural Stone Award 2020: it is the new obelisk in the capital Stockholm with a height of 30 m and a weight of 280 t, of which 43 t alone for the 5 m high base. The task demanded top performance from those involved in the quarry through transport and processing to installation, not only in terms of size and weight but also in terms of precision.

The prize has been awarded annually since 2013 by the Swedish Stone Association (Sveriges Stenindustriförbund) to projects using local stone that stand out for their special “aesthetics, sustainability and innovation,” according to Kai Marklin, president of the association. The award does not include money and consists of a cube made of the respective Stone of the Year, this time Norrvange limestone from Gotland. 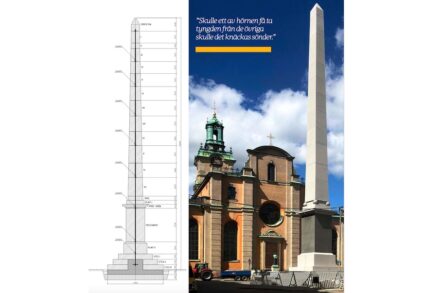 Bohus granite of the Tossene Grå variety was used for the obelisk on the Slottsbacken boulevard immediately adjacent to the castle and cathedral. The predecessor monument had been made of Stockholm granite, but it is no longer quarried. It was a gift from King Gustav III to the city for its role in the Swedish-Russian War of 1788-1790.

Problems had surfaced early on, including cracks due to rusting iron clamps between the individual parts of the obelisk. 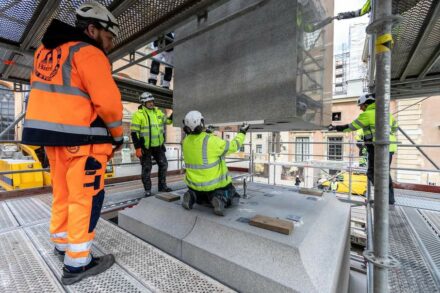 Reconstruction with new material took place from April to August 2020. Numerous challenges had to be overcome:
* in the quarry, 4 blocks had to be taken out first for the base until a piece with the necessary quality was found;
* during assembly, each element had to be lifted and realigned 5 to 10 times;
* between the elements there are lead plates with 1 to 5 mm thickness;
* inside, a stainless steel bar connects the structure from top to bottom;
* the joints are only 5 mm wide.

After the many technical details, here is one more humanizing story: under the keystone at the very top, there is a golden ring. It comes from construction supervisor Hans Bergsten: his father had always taken him to the obelisk as a child, and the old gentleman had been thrilled to see the renewal – but he died by corona in the spring before completion.

The stone was supplied and worked by Hallinden’s granite. The stone is bushhammered, or polished at the base portion with the inscription. 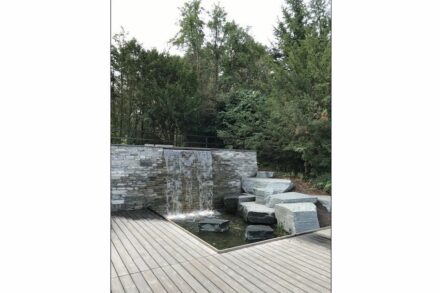 “Nordisk Djungel“ (Nordic Jungle) is the name of a newly designed part of the park in the city of Lund. Landscape architect Ulf Nordfjell designed waterfalls, boardwalks and wetlands, and interspersed them with striking natural stone zones. The Oppdal and Offerdal slates were used for paving, walls or boulders. The formats of the stones vary from 38 t to small rocks. 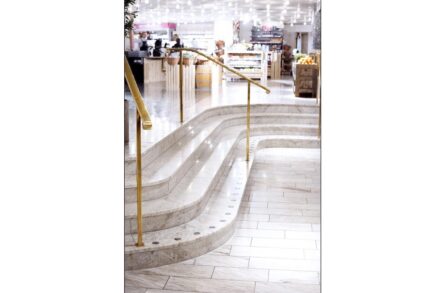 Nordisk Kompaniet is Sweden’s well-known brand for luxury department stores. Their flagship in Stockholm has been modernized. In the inner courtyard, under a glass roof, one finds the local marble varieties Brännlyckan, Ekebergsmarmor and Kolmårdsmarmor, altogether “the best that the Swedish stone industry has to offer in terms of stone quality, craftsmanship and new technical solutions,“ as the jury describes it. 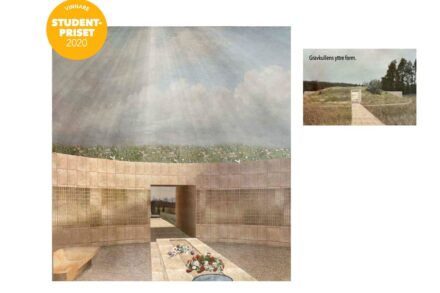 The prize for students had been organized by the Cemetery and Crematorium Association (SKKF) together with the Natural Stone Association and was endowed with 10,000 Swedish krona (~ 1200 US-$ ). It went to the Ängskastellet project by Emma Nilsson and 0ssian Trotzig. They had imitated the shape of old burial mounds for the extension of an urn grove by creating a mound open at the top and supporting stone slabs on the inner walls.