How tectonic history and climate shape biodiversity in the tropics 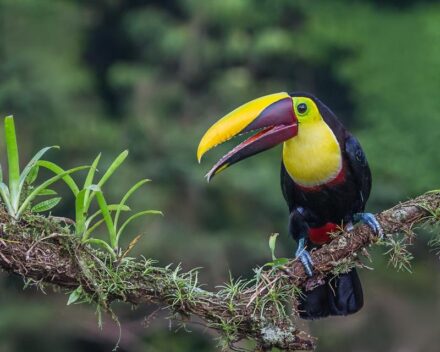 In a computer model, scientists from ETH Zurich have compared the Amazon Basin in South America, the vast archipelago of Southeast Asia and the Congo Basin in Central Africa

Tropical rainforests are the most biodiverse habitats on Earth. They are home to a huge number of different plants, animals, fungi and other organisms. These forests are primarily spread over three continents, concentrated in the Amazon Basin in South America, the Congo Basin in Central Africa, and the vast archipelago of Southeast Asia.

One might assume that all tropical rainforests are about equally diverse due to their stable warm and humid climate and their geographical location around the equator – but this is not the case. Compared to South America and Southeast Asia, the number of species in Africa’s humid tropical forests is significantly lower for many groups of organisms.

A good illustration of this uneven distribution – what researchers refer to as the pantropical diversity disparity (PDD) – is palm trees: of the 2,500 species worldwide, 1,200 occur in the Southeast Asian region and 800 in the tropical forests of South America, but only 66 in African rainforests.

Other evidence suggests that the different environmental and tectonic histories of the three tropical forest regions over tens of millions of years had an impact on the differing levels of biodiversity. Such environmental changes include, for example, the formation of mountains, islands, or arid and desert areas.

However, it is difficult to distinguish between the two factors of current climate and environmental history.

Led by Loïc Pellissier, Professor of Landscape Ecology, researchers at ETH Zurich have now investigated this question with the help of a new computer model that allows them to simulate species diversification over millions of years of evolution. They conclude that the current climate is not the main reason why biodiversity is lower in the rainforests of Africa. Rather, biodiversity has emerged from the dynamics of mountain building and climate change. The results of the historical simulations largely coincide with the patterns of biodiversity distribution observable today.

“Our model confirms that differences in palaeoenvironmental dynamics produced the uneven distribution of biodiversity, rather than current climatic factors,” says Pellissier. “Geological processes as well as global temperature fluctuations determine where and when species emerge or go extinct.”

One factor in particular is crucial to high biodiversity on a continent: geological dynamics. Active plate tectonics promote both the formation of mountains, such as the Andes in South America, and the emergence of archipelagos, as in Southeast Asia. These two processes result in many new ecological niches, which in turn give rise to numerous new species.

Africa’s rainforest belt, on the other hand, has had less tectonic activity over the past 110 million years. It is also relatively small because it is bordered by drylands in the north and south, limiting its spread. “Species from humid regions can hardly adapt to the dry conditions of the surrounding drylands,” Pellissier points out.

The “gen3sis” model developed by ETH researchers was only recently presented in the journal PLoS Biology. It is a mechanistic model in which the primary constraints such as geology and climate are represented together with biological mechanisms and from which biodiversity patterns can materialize. To simulate the emergence of biodiversity, the most important processes to integrate into the model are ecology (i.e. each species has its own limited ecological niche), evolution, speciation and dispersal.

“With these four basic rules, we can simulate the population dynamic of organisms over shifting environmental conditions and offer a very good explanation for how the organisms came about,” Pellissier says.

By building their model on these basic evolutionary mechanisms, the researchers can simulate species diversity without having to input (distribution) data for each individual species. However, the model requires data on the geological dynamics of the continents under consideration, as well as humidity and temperatures from climate reconstructions.
The researchers are now refining the model and running simulations to understand the emergence of biodiversity in other species-rich regions, such as the mountains of western China.

The model’s code and the palaeoenvironmental reconstructions are open source. All interested evolutionary and biodiversity researchers can use it to study the formation of biodiversity in different regions of the world.