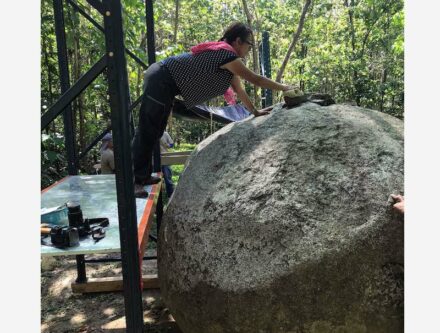 They were placed in the years from about 800 a.d. until the conquest by the Spanish in the 1500s

The National Museum in Costa Rica’s capital, San José, is hosting an exhibition until January 24, 2022, on the mysterious stone spheres, hundreds of which have been found, especially in the south of the country, and on which much research has been done in recent years. On a webpage one can find (in Spanish and English) a summary of the current state of knowledge. Since 2014, a contiguous area with 4 villages in the delta of the Diquís River has been recognized as a Unesco World Heritage Site.

The spheres, often in perfect round shape, have diameters from a few centimeters to the largest known with 2.66 m. This one has a mass of 24 t. Most are made of local gabbro, a volcanic rock similar to granite. Less frequently some are made of limestone, sandstone, claystone, or conglomerates.

Probably they served as signs and symbols, with which the rulers made their area of power visible, and which conversely testified for the ruled the affiliation to this community. One could say casually: they were information boards, which made clear (without writing), who had the say in an area and how the world view of the living was there. 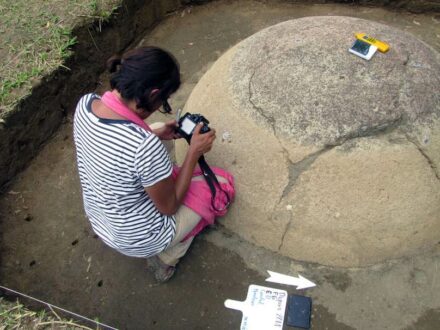 From 300 a.d., complex societies characterized by strong hierarchies had formed in what is now the province of Puntarenas on the Pacific side of Costa Rica. They are called Chiefdom Settlements by scholars. The communities were highly developed: from Finca 6 (“Farm 6“) , the most prominent of the 4 World Heritage sites (along with Batambal, El Silencio and Grijalba-2), it is known that people made large mounds and paved areas and that there were burial grounds.

On the web page of the Cultural Heritage, you can find more details about the possible function of the spheres: They “were objects to which only a few had access, as their production required great technical skill, resources and social organization. The larger and more perfect the sphere and the greater the number of these artifacts, the greater the prestige and importance of the village and its inhabitants.“

Perhaps the spheres were also aligned with the ruler’s residence, perhaps ceremonies were held at them.

Possibly, in some places they were also aligned with the movement of the celestial bodies, to indicate the dates important for agriculture or the approach of important festivals, says the web page. 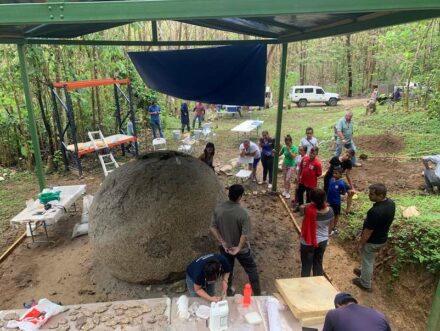 It is believed that their number in a place gave information about the importance of the particular village. “It is likely that the bullets were sent from the chief’s seat to subordinate or allied communities to keep the area under ideological, economic, and military control. Or each community may have created its own spheres as a reference for a common identity.“

While these conjectures at least allow us to ascribe a plausible role to the bullets, nothing is known about the transportation of the stones. All that is known is that they came from nearby sites and which ones they were.

About the processing it says: “The surface (was) worked with stone tools, with heat layers of rock could be removed.“ Roundness could be controlled “with wooden elements.“ “The surface was smoothed with abrasives such as sand, larger spheres were also polished to give them a shine.“ Whether the processing was done in the quarry or on site is not known.

They were created and placed from about 800 a.d. until around 1500. Many of them were last sunken into the ground – so with the help of strata analysis (stratigraphy) it was possible to determine their age, at least approximately.

Since 2014 they are strictly protected and also have the rank of a national symbol of the country. By then, however, many of them had already been excavated and placed elsewhere, for example in front gardens. 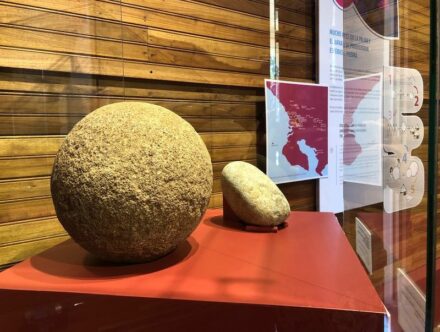 Their existence had been known for a long time, but they only became popular in the 1930s, when the Compañía Bananera de Costa Rica, an offshoot of the U.S. corporation United Fruit, cleared the jungle and established banana plantations. The soil there is very fertile. Bulldozers were used to clear away the round boulders, and some were broken up with dynamite after rumors surfaced that gold was hidden inside the stones.

The daughter of a senior employee at the fruit company took up the scientific study of the objects, which are unique in the world. Hence the name “Farm 6“ for one of the World Heritage sites.

Some of the blasted spheres were later glued back together and can also be seen in the current exhibition at the National Museum in San José.

Photos: Courtesy of the National Museum of Costa Rica.