The 2nd season of the documentary series “Uomini di Pietra“ (Men of Stone) is underway: the tough guys in the quarries of Henraux have been joined by a woman 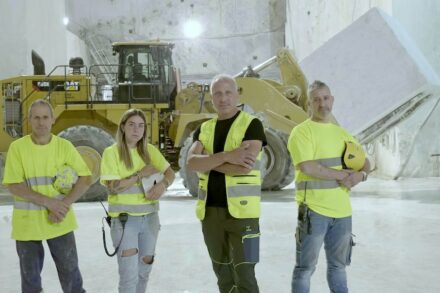 The Italian company Henraux with long tradition has adopted an unusual form of public relations for natural stone quarrying: in a documentary series, it presents the work in the quarry and in the processing of its marbles in dramatized narrative form – “Uomini die Pietra“ (Men of Stone) is the title of the six episodes of one hour each. The main characters are Paolo, Michele, Mario, Luca and Enrico, the setting is the quarries of Henraux on Monte Altissimo in the Apuan Alps near Carrara.

The second season of the series will run until mid-December 2021. A year earlier, had already seen such a documentary series, which told of specific requirements in stone quarrying, of problems with the heavy machinery and of time pressure on the part of customers. As the title suggests, and as the stills show, it was about real guys: “They are brave, tireless and tough as nails,“ promised a promotional text from the private TV station that broadcast the episodes. 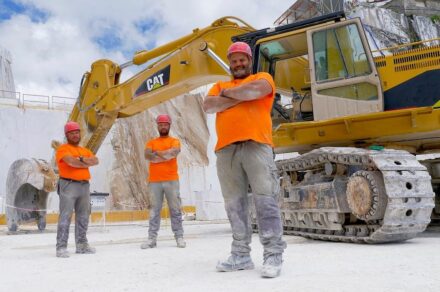 The actors were real Henraux employees: the aforementioned Paulo was Paulo Carli, president of the company since 2003, and the others were staff members from a total of 150 people in various areas of the company.

For the second season, some of these actors have been eliminated and there has been an important innovation: right at the beginning, Barbara joins, a New Yorker who has come across the Atlantic for the purpose of quality control. She represents a major project that has ordered a lot of stone from Henraux.

One suspects what is coming with her joining the team. Because Barbara is, in short: energetic, and if necessary, also rough, as we summarize the press text of Henraux briefly.

In the end, however, everything turns out well: “In a closed male environment like that of the quarry, she is initially eyed with great suspicion, but later she forms part of a team and brings new enthusiasm to the centuries-old work in the quarry“ 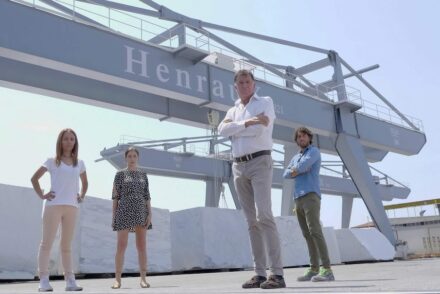 This happy ending is not really surprising, because it characterizes this kind of TV movies. The first season, at any rate, was a “remarkable success,“ as Henraux writes.

The episodes were produced by the company GiUMa, which wrote the script in cooperation with Henraux’s boss and has already created series on logging (“Undercut“) or the construction of ski slopes (“Signori della Neve“).

Spectacular drone shots from a bird’s eye view are abundantly intercut into the episodes – after all, the quarry is the main protagonist.

The concept, of course, has attracted critics. At the start of the second season, Athamanta, a group for the protection of the Apuan Alps, spoke out with a rant in the daily newspaper La Voce Apuana: the marble extraction of Henraux would lead to the destruction of geological features and valued animal and plant species in the Geopark Apuan Alps. As a result, it would bring nothing but “devastation“ – the local people would not profit from the treasures of the region in the process, but “mainly wealthy foreign buyers,“ it says crossly.

Athamanta only scoffs at the way the docu-soap is made: “Muscles, huge machines, machismo and turnover“ are the focus, as is the core of DMAX’s business model. The station broadcasts the series.

In the new season, the personalities of the actors and also their love of the mountain are now to be portrayed more strongly, Henraux writes: Mario takes a friend climbing in the mountains to show him the beauty of that world; Luca, meanwhile, has left the natural stone sector and settled with his family on a mountain farm. 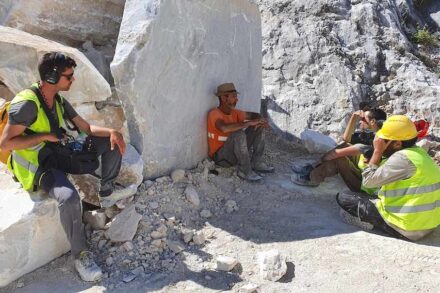 “Uomini di Pietra” was produced for Discovery Italia with the support of the Trentino Film Commission. DMAX is a private television channel owned by Discovery Network and broadcasts the docu-series on Digital Terrestrial Channel 52, Sky Channel 170, and Tivùsat Channel 28.

Henraux is one of the most prestigious marble quarrying and processing companies in the world. Its founder was Jean Baptiste Alexandre Henraux, who traveled the countryside with Napoleon’s troops with the mission of finding marble for the planned monuments in France.

A year after his inspection in the Apuan Alps, he returned there and founded the Henraux company on January 20, 1821, exactly 200 years ago, together with an Italian partner.

As early as 1845, the company received its first major order, from the Tsar of Russia: he ordered great quantities of marble for the construction of St. Isaac’s Cathedral in St. Petersburg. Even today, one of Henraux’s quarries bears the name Cava Russia. Later, Auguste Rodin was also a frequent guest at the company’s Querceta headquarters.

Among the most spectacular quarries in the world is the one at 1589 meters above sea level on Monte Altissimo.

Michelangelo had already praised the quality of the marbles during his explorations in the area. He wrote: the marble is “of uniform grain, homogeneous, crystalline and reminds of sugar;“ the mountain is “filled with marble until the Day of Judgment,“ as Henraux quotes the old master in his company history.