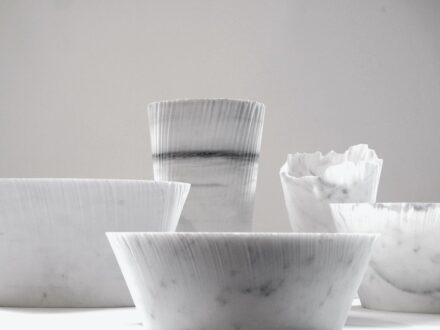 For the design, he uses the – actually undesirable – fluttering of the water jet that occurs when thicker materials are to be cut

Paolo Ulian comes from Carrara and consequently marble is close to his heart. That is why he began early on to consider the question of how to handle this natural resource with care. One of his thought processes was to use design to find uses for those marble waste pieces that sometimes accumulate in masses and end up lying around in piles or boxes in the backyard of the stone factory.

In his project “Drap“ (English: drape) he follows a different way of thinking about the use of marble remnants: he lets the tool water jet to its limits, takes the defect that exists in the product in the process, very specifically in his concept and finally prefers to use B-grade marble from the quarry. 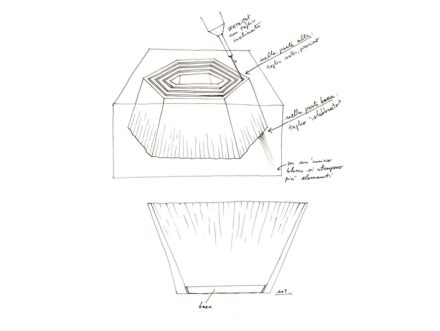 Specifically, Ulian has the waterjet cut a piece of marble 20 cm thick for his vases, bowls, and dishes. This is possible, but usually not done, because with such cutting lengths the water jet flutters at the far end.

What is more, the wavy shapes that are created in the process, which certainly have similarities with a wavy curtain, sometimes turn out so thin that they break away.

Paolo Ulian now is an experienced designer, turns a vice into a virtue and declares it all a trademark in his latest thinking. 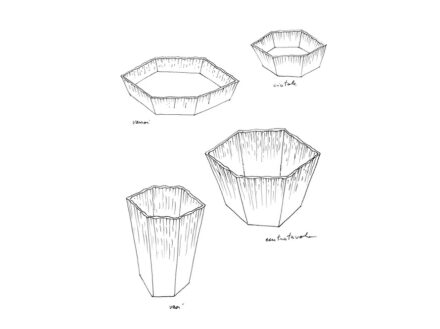 The current collection consists of 5 objects. 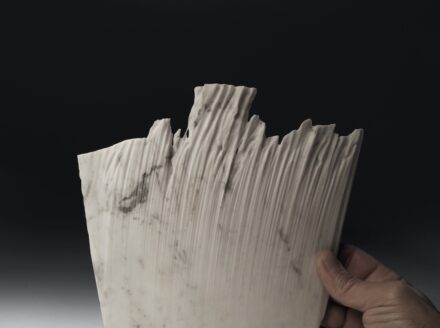 All are characterized by their wavy shape on the upper edge, where the marble is broken away in places.

Another peculiarity of the production is also worth mentioning: the objects fit into one another, so they are quasi concentric circles. Only the cutting width of the water jet and the innermost core are lost in production.

But: they are supposed to be containers – how does the designer get a bottom into them?

Again, the water jet makes it possible, but this time due to a different property: the tool can make extremely precise cuts, and so the desired bottoms are cut exactly from other marble remnants of 1 cm thickness and glued into the vases.

Would it perhaps also work without bottoms, if one were to use the cut-out round pieces as cachepots, for example? This would just require cutting thicker walls, so they do not break easily.

Ulian has again realized his latest collection with the Italian company Bufalini, which is already in its fourth generation working marble and is based in Marina di Carrara. The company has already realized many of the designer’s previous works, most of which we had featured.

“Drap“ will be on display at Milan Design Week 2022 (June 06 – 12) at Circolo Filologico, a magnificent building near La Scala.

However, we must warn against visiting Paolo Ulian’s website: he has consistently neglected it for well over a decade. Interested readers can learn more about his work with marble by searching our pages for his name (in quotation marks).

He presents the concept for “Drap 2himself in a video for Marmomac 2017, at which time Ulian had already experimented with the flawed nature of the tool. 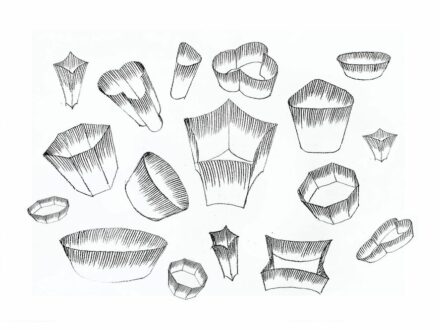