In Austria, the natural stone prizes of the year 2022 were awarded 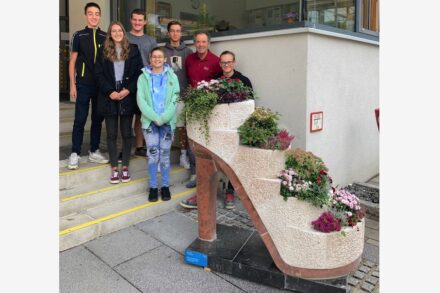 Categories were: apprentices, design, gravestones, and monument preservation / The initiator is the Federal Guild of Stonemasons, cooperating with the Steinzentrum Hallein (Hallein Stone Center)

Natural stone prizes have been awarded in Austria since 2012. They are awarded annually in apprentices, design, gravestone, and monument preservation categories. The initiator is the Federal Guild of Stonemasons, cooperating with the (Steinzentrum Hallein) Hallein Stone Center.

There is no prize money, but the winning companies or individuals may use the award in their self-advertising for one year.

We show the winners of the year 2022 in a picture gallery.

(Photo above) The first place among the apprentices was won by the 2nd class of the Fachschule für Steintechnik & Steingestaltung (Technical College for Stone Technology & Stone Design, HTL Hallein) with their team project “Kräuterschuh High Heel“. These are small, raised beds in a very special arrangement. 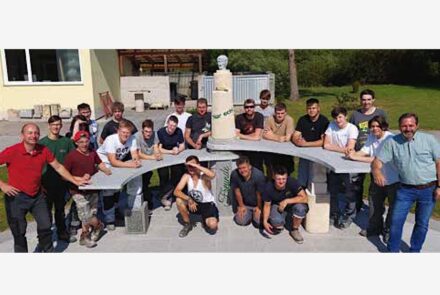 The second place went to the student group of the LBS Schrems for their “raised table with meaning“. The description says: Because everyone has weaknesses and is also allowed to have them, the column in the middle bears the inscription, Friends don’t have to be perfect, just real.“ 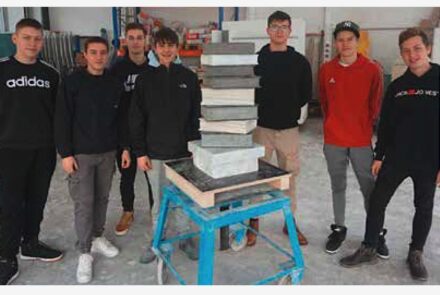 A group of apprentices from LBS Murau took third place with their “Special kind of book pile“. For this, the young people used leftover pieces from the workshop and redesigned them. 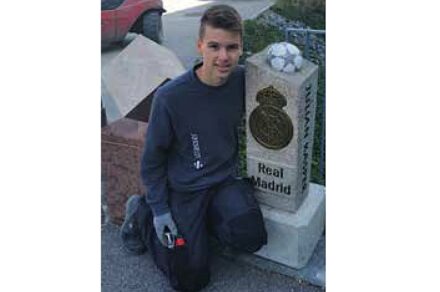 A special prize for creative and professional introduction to apprenticeship went to Julian Kasper (Strasser Steine), who honors “his“ Real Madrid soccer team. 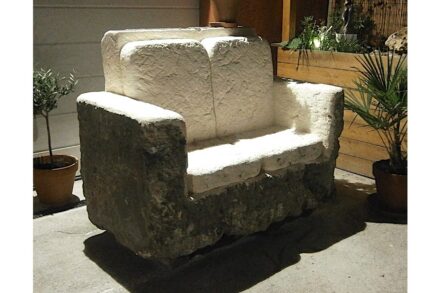 The first place in the category Design went to Reinhard Winter (Arteum – Reinhard Winter e.U.) for his garden sofa “Ringstraße, Block 53“. The sandstone used for it comes from the time around 1880, when the Ringstraße was built in Vienna. It is lined with many magnificent façades. The stone block bears the number 53 on the side – it was probably intended for a specific use at the time but was not used. The original surface from that time was deliberately preserved, but lightly polished to eliminate sharp edges. 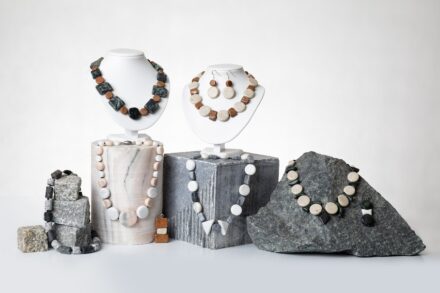 There was a recognition for Elisabeth and Martin Schmeiser, who process the variety of stones from Austria into jewelry. “A piece of home can hardly be more beautiful,“ is the motto. 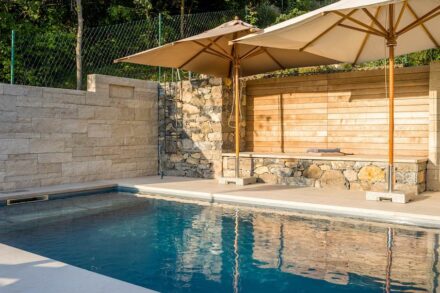 Recognition also went to Steinbauzentrum Hans Tremmel GmbH for the design of the pool terrace with masonry of various types. Limestone and sandstone were used. Part of the wall is designed in the look of a dry-stone wall. 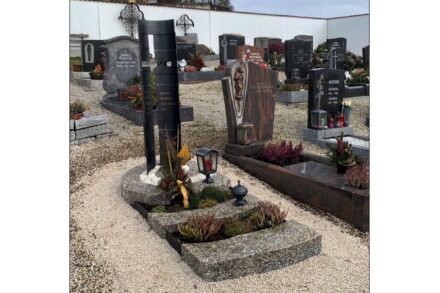 The first place in the gravestone award went to Stein Baumgartner GmbH for the grave entitled “Trinity“ for a priest/military chaplain. Three stones are adapted to the terrain as steps and reflect the life path of the deceased: first his activity as a carpenter, then his ordination as a priest, and finally the cross at the end of the life path as redemption. 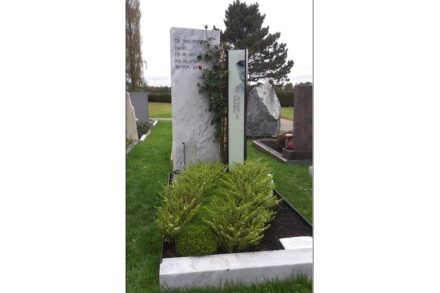 The second prize went to master stonemason Raimund Fuchs for the Daxberger tomb. Krastal marble, glass, and metal were used. One of the special tasks was to put a photo of the deceased on the tombstone, but not in the usual form of such pictures and not on the tombstone as usual. 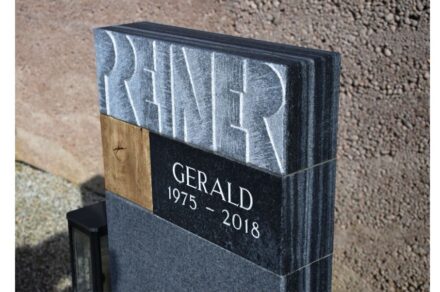 The jury awarded the third prize to master stonemason Rudolf Wienerroither for the grave monument “Facets of Life“ for a master carpenter. The gravestone in Wachau marble should be “simple, straightforward, modern and yet a little different – simply fitting to the deceased,“ was the wish of the relatives. 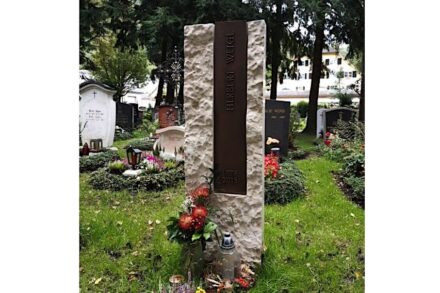 Master stonemason Raimund Fuchs received another recognition in addition to the 2nd prize, namely for the “Tomb Weigl.“The deceased had written a book about the water supply of the city of Salzburg, and so Fuchs chose the Untersberg marble, whose surface had been formed by a glacier. 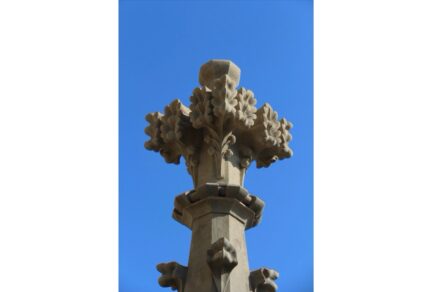 At Linz’s Mariendom, the largest sacred building in Austria, the spire was restored. A first prize in the monument preservation category went to master stonemason Gerhard Fraundorfer for his diverse work there. 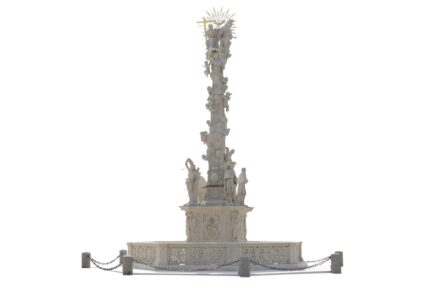 Another first prize went to Mag. Klaus Wedenig (Restoration Company GmbH) and Schreiber & Partner Natursteine GmbH for the work on the Plague and Trinity Column in Poysorf. It had been erected in 1715 because the place had been spared from the plague. 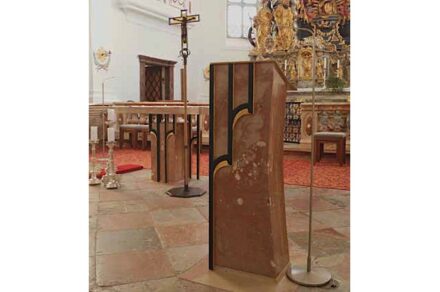 The third prize in the category of monument preservation went to master stonemason Raimund Fuchs for his work on the Arnsdorf church.

Recognitions were given to: 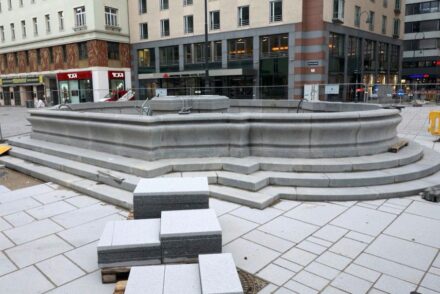 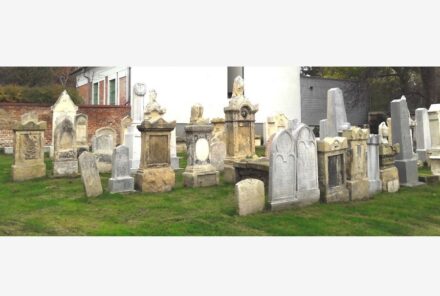