Gooooooooooooooaaaaaaaaaal: the new away jerseys of Italy‘s national soccer team will wear a marble effect 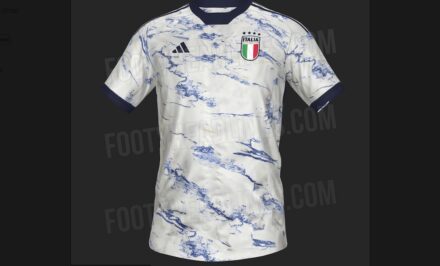 If this news is true, Italy’s stone sector can rejoice, however, millions of clandestine Tecnicos (national coaches) in the country will have to re-organize their game accompaniment: in away games in the future, Italy’s national soccer team will play in new marble-effect jerseys. They are white with blue patterns and yellow sprinkles.

Il Tirreno broke the news in its supplement for the Massa-Carrara region. The daily newspaper refers to the web page Footyheadlines, from which, searching for the original source of the information, one comes to numerous other blogs.

Regarding the picture of the new kits, it is said that it corresponds to 80% of the final product, only the collar and the cuffs on the sleeves need to be fixed.

There is talk of a “leak“ at Adidas: it has gained the commission for the future Azzurri jerseys from competitor Puma. From Adidas came the idea and the execution of the marble design.

Il Terreno immediately asked the Confindustria Livorno Massa Carrara association about the matter. The president of the marble region in the association was full of joy: “For us, it is a great honor to see the textures of our wonderful marble on the away kits of the Italian national soccer team,“ said Matteo Venturi.

He also put forward a proposal for later PR activities: “We are now waiting for the jerseys to be official, then it will be nice to organize an event here, maybe with some players of the national team or the tecnico Roberto Mancini himself.“ They might visit the quarries, the local center of excellence or the Marble Way, he suggested. “We have a lot of ideas.“

The Carrara Marble Way is to a consortium of natural stone entrepreneurs from the Apuan Alps. The consortium unveiled its “Essere Marmo“ (Being Marble) initiative in December 2022. At its heart is a “Manifesto“ with 10 points with which the participating companies commit themselves to sustainability and circular economy.

It also highlights the role Carrara marble plays in the region’s prosperity and played in the cultural history of Italy and Europe.

The manifesto is also the sector‘s response to environmentalists who criticize stone quarrying in the Apuan Alps and especially on Monte Altissimo.