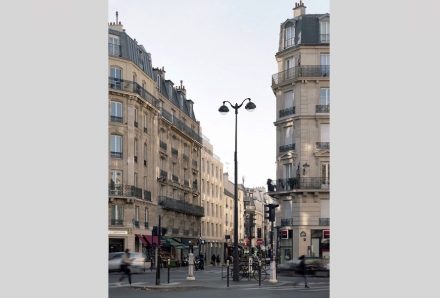 Natural stone implementation in France is unique inasmuch as massif construction in stone is an idea and is continuously being improved. The ingenious construction involves a building-block type of stone-on-stone construction using small cubes but no mortar. We had reported on this type of construction in earlier issues based on publications we found in French trade magazine Pierre Actual.

This type of massif building has now arrived in Paris where it made its début at 62 Rue Oberkampf in the 11th Arrondissement near the Parmantier Metro Station. The building was completed in 2017. It is well integrated in the surroundings and typical for Paris façades as if it had stood there all along since the refurbishing of Paris by Baron Haussmann in the second half of the 19th century.

The building was conceived by architects from Barrault Pressacco. Their aim was to combine the contemporary with the traditional. They sum it up in a pdf on the project: „Building today is not an isolated occurrence but rather the answer to a question asked some time ago.“ 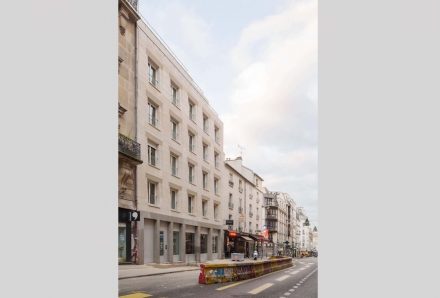 One of the distinguishing elements of the Haussmann-style Façades is the high ceilings on the ground floor which typically accommodates shops and cafés and separating it from the stories above. Barrault Pressacco underscore this distinction with their choice of material: the façade above above is made of ocher limestone but the ground floor is concrete, sanded to blend in with the texture of the stone above.

The distinguishing factor is that the façade from the 2nd to the 7th floor are massif stone blocks and not merely cladding. The blocks are 130 cm wide and a mere 35 or 30 cm thick cut from Pierre Brétignac Limestone. 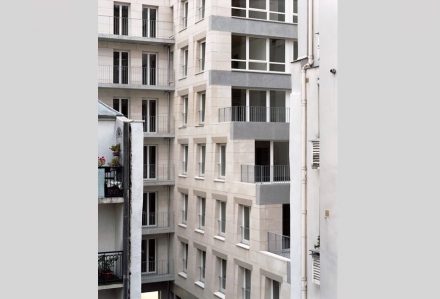 Concrete was used in upper floors in isolated cases, e.g. where stability required a wider block. But the materials are distinct and easy to distinguish.

A steel frame on the interior is attached to the façade and serves as an anchor for the ceilings to ensure that the weight of the stories is uniform for all stone blocks throughout the façade.

It was the declared aim of the architects that the distribution of the rooms should remain flexible wherever possible leaving configuration up to the tenants. 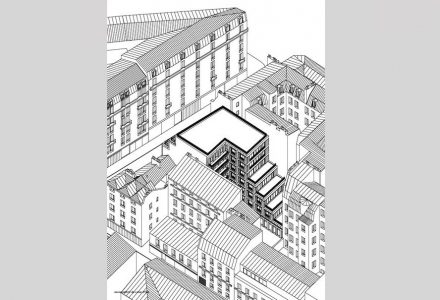 In the interior court the stories are stepped allowing all flats to profit of a sunny south-facing balcony.

Insulation is provided using hemp-lime, a mixture of plant fiber, lime and water. It was sprayed unto the walls and hand finished. Hemp-lime is said to afford a particularly pleasant interior climate.

The typical mansard construction of the Haussmann era is reflected in two recessed floors with surrounding balcony. 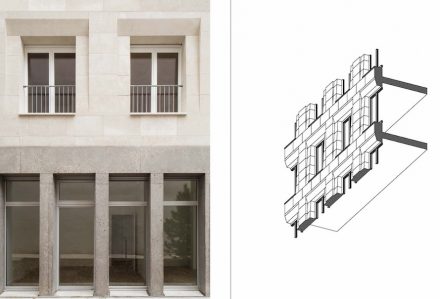 Note the vibrant limestone grid pattern in the façade. The only decorative elements are the diagonally cut window frame elements (three sides only).

„It must be the right material for the right application“, the architects are quoted at Archicree webpage. They are currently doing research how natural stone can play a stronger role in construction.

Prior to the new building, 62 rue Oberkampf was a constant headache and cause for concern. Originally the address housed a furnished hotel for long-term rental until in 2009 it was deemed a hazard by the municipality and shut down. RIVP (the municipal housing construction company) took over the refurbishment and build 17 new low-cost dwellings.

But low-budget housing was not the sole aim of the endeavor. Current sustainability topics were also at the center of focus. Using natural stone the architects were able to win the contest for tenders.

One of the most important budgetary arguments was the speedy building schedule due to pre-cut elements delivered and immediately assembled on site according to a strict plan.