Only virtually: the general assembly of Euroroc took place on October 02, 2020 in the internet 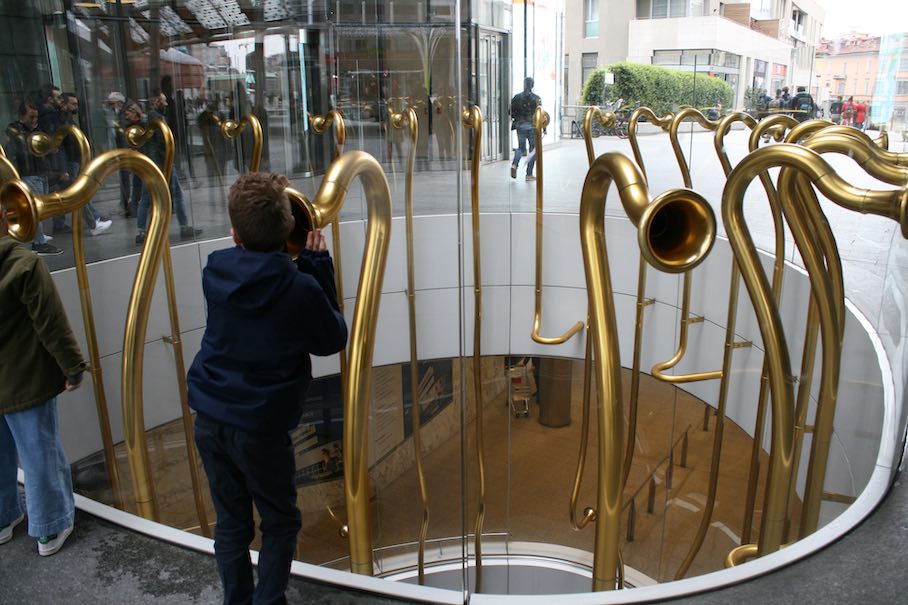 The General Assembly of Euroroc, the umbrella organization of national trade associations in Europe, took place on 2 October 2020, this time only virtually. The weakness of such meetings via zoom was clearly shown, namely the lack of exchange in passing or of opportunity to deepen individual questions. In other words: unlike at Marmomac, where the meeting usually takes place and where people meet before or after for lunch and in the evening in a restaurant, this time it was already over as soon as it had started, and only little of it remained afterwards.

The most important item on the agenda was the election of the new president, who is elected every two years. The candidate is nominated in a fixed rotation between the national associations. For the next 2 years, Hermann Graser from the German company Bamberger Natursteinwerke was appointed; he is soon to take over the office of president in his home association (Deutscher Natursteinwerkstein Verband, DNV).

The aim of his presidency is, „to make the voice of natural stone heard and to create an awareness of decision makers of the importance of the material for our European culture.“ In December, we will publish an interview. 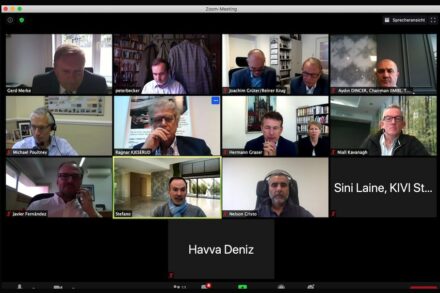 There were short Corona situation reports from the associations (links to the associations below), as of October 02, 2020:
* Germany’s stone industry is only “slightly affected”, said Reiner Krug from DNV. Many investors have postponed building projects, however there is even a positive development within the range garden and landscape gardening;
* Spain’s natural stone industry lives at present only on exports, said Javier Fernández Cortés (Cluster Piedra, CT Marmol), the domestic market has practically collapsed. Corona has occupied the economy “as if with mildew”. By the end of the year, he expects -20% to -30% in sales for the entire sector;
* in Great Britain the conversions from the commercial range are only little concerned; demand comes from the garden and landscape sector, yet there a specialists for natural stone projects missing; the consequences of the Brexit are open, so Michael Poultney (Stone Federation Great Britain);
* In Turkey, block exports to China have so far been -30%, but exports of processed products have been +5%, according to Aydin Dincer (Istanbul Mineral Exporters’ Association, IMIB). For the whole year he expects a total of -15%;
* Norway suffers little from corona, reported Ragnar Kjeserud (Norsk Bergindustri), in addition “our Prime Minister is very much on the side of the stone industry”. The crisis has brought a significant increase in private demand for natural stone (keyword: cocooning);
* Ireland had a shutdown for 2 months, but its construction industry is still strong. “We have enough projects in the pipeline for 2 years”, said Niall Kavanagh (McKeon Stone company), who represents the country since the country has no more a stone association;
* in Portugal, there was a complete shutdown for only a few companies. The declines in exports varied greatly by destination country. At present, all stone companies are working at full capacity again, but there are major problems in transport due to a shortage of containers and rising costs. The increasing exports to China went against the trend, according to Nelson Cristo (Assimagra);
* the Finnish representative, Sini Laine (Kivi – Stone from Finland), reported on business as usual in the stone industry in her country. There had been “a lot””of support from the government. However, she generally expects a recession;
* “Italy had a complete shutdown for 8 weeks, and nothing of the required financial support , contrary to Germany for instance, had reached our companies except the proposal to apply for a loan at the Italian banking institutions,” said Stefano Ghirardi (Confindustria Marmomacchine): “We are alone and swimming in the vast ocean without a lifeline”, he reflected the mood. There is practically no domestic demand in this heavy economic recession, but the industry wants to remain focused on international exports anyway. The competition from the ceramics industry is strong.

Secretary General Gerd Merke reported on the topics Euroroc is working on at European level, including the Geographical Indications (link below). An overview of the current topics is shown in the following screenshot: 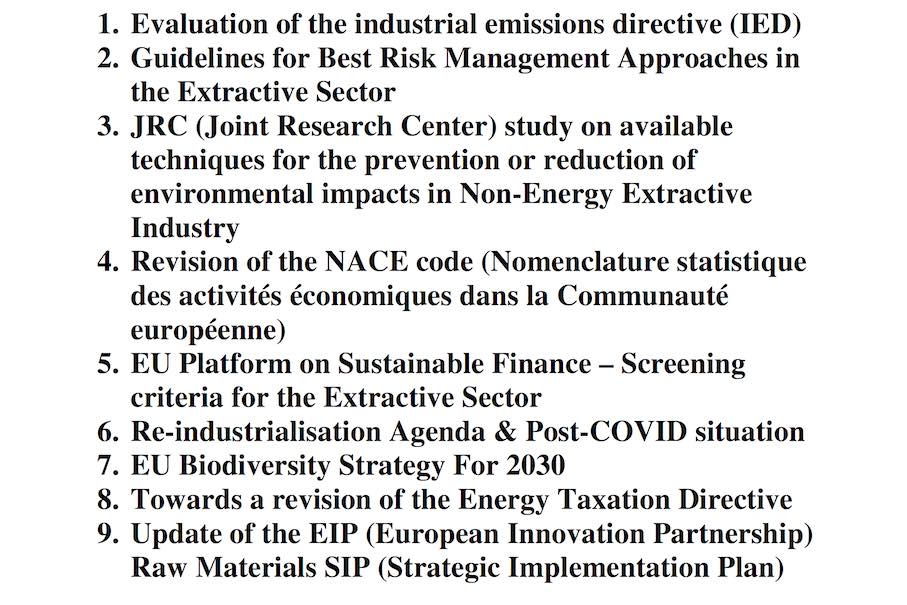 Comments of some participants later at the General Assembly:
* Sini Laine from Finland announced that new environmental regulations for building materials are currently being developed in her country;
* Nelson, Cristo, Portugal: Assimagra plans to create a “DNA” of its stones in order to distinguish original from fake names;
* Stefano Ghirardi (Confindustria Marmomacchine): for the first time an Italian natural stone company has gone public, namely Franchi Umberto Marmi.

Complementary to the German Presidency: The Association has agreed to provide care and maintenance of Euroroc website, which had been redesigned by its Belgian predecessors. It also wants to help with the organization of the so-called virtual teams.

Here is an explanation of this idea by Secretary General Gerd Merke: “We have noticed that the extensive topics of the natural stone industry do not always affect all our members equally. Not everyone can be interested in everything. Thanks to our Belgian Presidency (2018 to 2020), we have set up virtual teams where the associations or individual companies concerned can exchange information. This ranges from small groups to the size of a workshop. Examples: Companies are involved in the field of sophisticated swimming pool construction and have gained experience with certain procedures or methods. Swiss companies and the Swiss Association are leading the way. In a discussion with our British friends, they were able to make use of the experience gained in Switzerland and have thus quickly built up competence in the British market. Comparable teams have formed for test methods and CE Marking.”

Links to the associations that are members of Euroroc