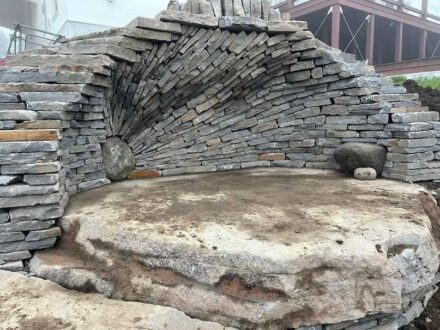 “Virtual Bench“ is what Teruki Kamiya has called the grotto in the picture above. The Japanese artist is a specialist in drystone walls, and he made this work for a doctor. In long conversations, both found the theme and the design: “The bench is the customer himself,“ Teruki writes us by mail.

What is meant by this is that it focuses the forces of nature and thus allows them to act on the one who is at the center. This is also how a physician works, Teruki puts it.

Drystone walls are layers of stones built without any mortar. The skill of the stone setter is to make the individual elements interlock as perfectly as possible. This craft tradition exists all over the world; it is known, among other things, from retaining walls on vineyards. In the past, collecting the stones for the wall also served to clean up a field and thus make more cultivation possible.

Teruki lives in Ishida, Kurobe in Toyama Prefecture, and so Far Eastern meditation is also part of his thinking. The Virtual Bench is an invitation to do so: the seat is a huge monolith that he found in a quarry, the grotto is made of “stones that are more inconspicuous in color and shape,“ as he writes: the ensemble is not intended to attract the attention of the viewer, but to make it easy for him to concentrate for meditation. 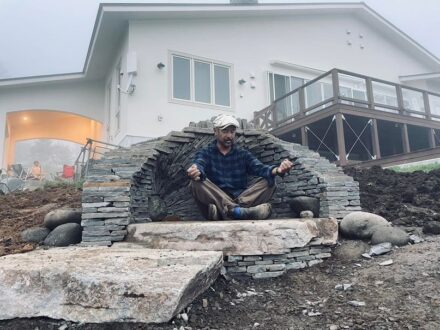 He likes to meditate where he has just finished a job: “Then I feel the power of the stone; that way my heart comes to rest and I feel the anticipation of the next job.“

Usually, a job begins with conversations with the client. In the end, he has a plan in mind – but he does not create a drawing for the execution.

Of course, that includes giving the stones the perfect shape for their respective places in the wall. “I only work with a hammer and chisel,“ he writes, and it sounds like it’s an important aspect of his work.

While many of his projects give the impression of being at rest within themselves (this is also true given the sheer weight of a drystone wall, which you can literally see with your eyes), there are other works that seem to have defied the laws of gravity. 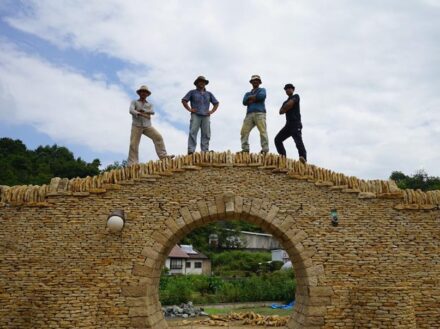 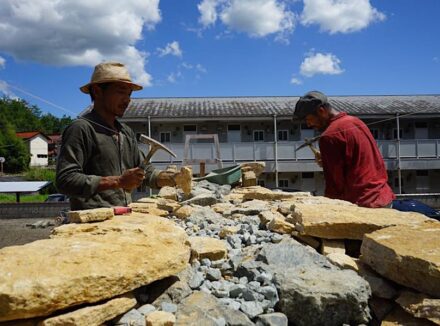 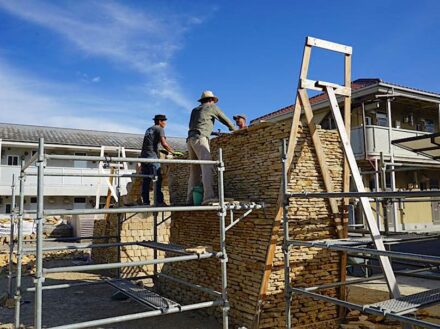 “Moongate“ (Moon Gate), for example. It has 2 outer rows of British Cotswolds Stone and in between small chunks of material from Japan. Special expertise and care is required here, otherwise the weight of the arch will destroy the structure.

Are drystone walls perhaps a form of earthquake-proof construction, was the question that came to our mind.

Teruki Kamiya is modest and does not want to propagate that he has found the best of all construction methods here. A wall like this can withstand a quake up to magnitude 6 (at magnitude 7, the houses collapse), that has been proven, he writes. However, an arch like the Moongate cannot withstand such an event.

Instead, he emphasizes another aspect: the construction collapses, but the building material is not destroyed. It can be reused later. In this respect, recycling is a core idea of drystone walling.

However, such questions do not seem to be the focus of Teruki Kamiya’s work. At its core, he is concerned with “creating something beautiful that the customer will enjoy and be happy with.“

At this point, at the latest, we have arrived at the tradition of Japanese gardens. Teruki’s company also offers such services. “Everything in a Japanese garden has a meaning, even the placement of a single stones,“ he formulates.

Let’s put it this way: beauty may be debatable, but this is about harmony, and harmony not only in the visual sense, but also in man’s relationship with nature. 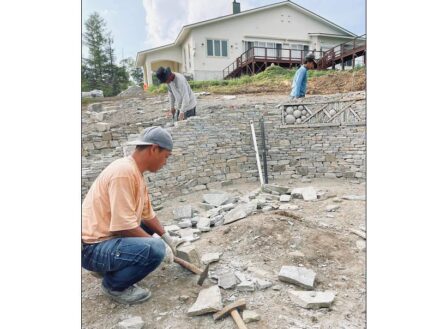 It also shows itself in the fact that, for example, a banal wall line is allowed to come across as if it were proud of itself. 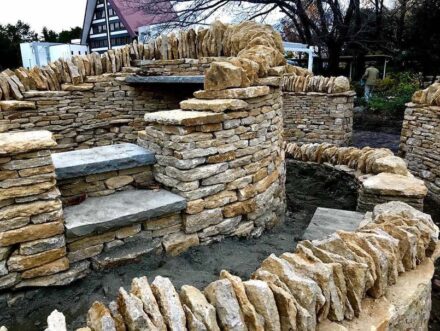 But: aren’t the topmost, vertically placed stones of such drystone walls likely to be stolen?

This is not a problem in Japan, he writes: fortunately, the country is safe and people have a serious character, we express his statement with our words. “My works have never been damaged.“

But, another question: drywalling is backbreaking work, right? That doesn’t seem to be an issue for Teruki Kamiya either. On Facebook, photos show that drywall can be created even in the rain, as he points out.

Even if the pictures show the performers filthy and with mud and dirt on their hands – “it’s a joy and fun to work with friends even under rough conditions,“ he notes.

The confrontation with nature is another important aspect of his work. 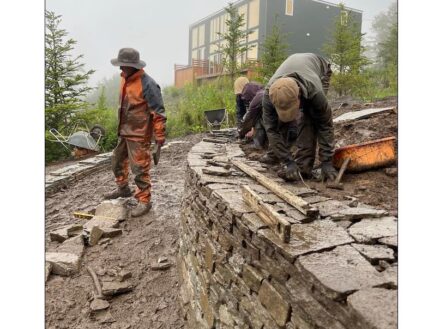 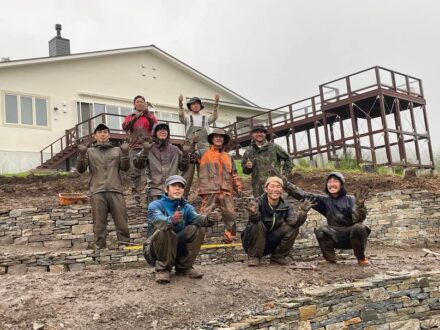 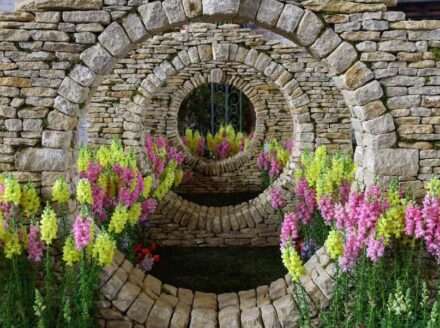