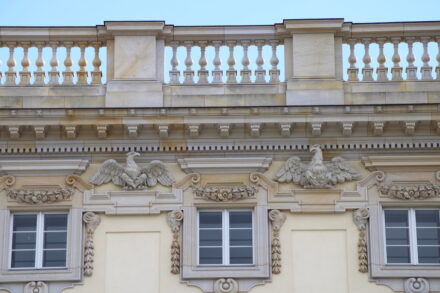 It offered the opportunity not only to present the material exclusively, but also the possibilities of modern machines from 3D scanners to CNC wire saws

What is wrong with Germans? we had asked in 2018 in a report on the reconstruction of the old town DomRömer in Frankfurt/Main. In the meantime, the trend of reconstructing buildings destroyed in World War 2 has come to a – perhaps only temporary – climax: the new Berlin City Palace with the Humboldt Forum will open on July 20, 2021. Forerunners of the reconstruction were, among others, the castles in Braunschweig and Potsdam or the Frauenkirche in Dresden.

For the German natural stone industry, the projects were a unique opportunity. Not only to showcase the beauty of their material with the decorative elements on the façades, but also to present the workmanship in the workshops as a modern activity.

This is because the reconstruction of the historic buildings involved the use of the complete range of machinery, from 3D scanners to CNC-controlled diamond wire saws.

The reasons for this were cost pressure and the danger of losing parts of the production to low-wage countries. 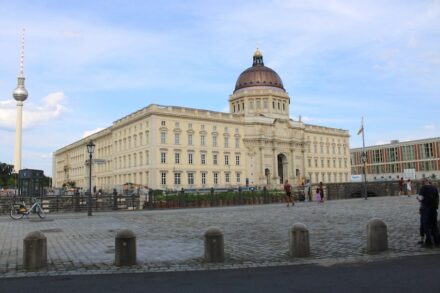 The amount of sandstone consumed was enormous: around 25,000 decorative elements were made from around 9000 m³, ranging from small sculptures and cornices around the windows to coats of arms weighing several tons. 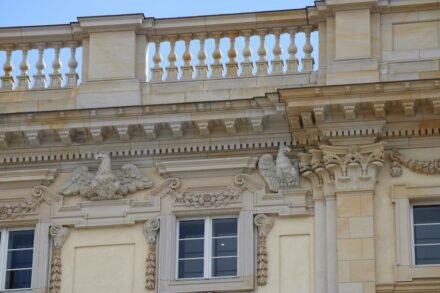 One example is the 43 eagles, high up on the facade: they look sometimes to the left and sometimes to the right, but differ in many more details, so that there are actually 30 different ones of these Prussian heraldic birds. The span of their wings is between 1.20 and 2.60 m depending on the distance between the windows.

Partially, the reconstruction of the decorative elements had to be done practically from scratch, because after the destruction of the war almost all the documents were lost. Fortunately, however, a cadastral plan from 1880 was found in the surveying office of Berlin-Mitte; in addition, there were ruin photos from the demolition after the end of the war. This made it possible to recalculate the lengths and angles of the façade sections.

These measurements were sent to the Masons’ Lodge (Schlossbauhütte), which was also set up for this mega-project, as was customary in the past for such large buildings: in Berlin-Spandau, the restorers used the measurements to create clay models, then cast plaster figures, which were then used by sculptors to chisel the new pieces out of rough blocks. 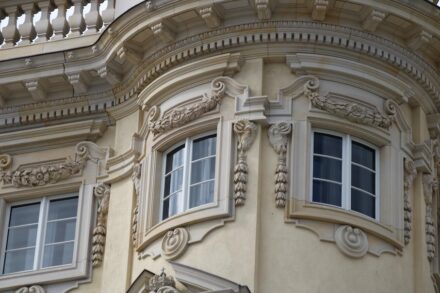 When larger numbers of pieces were needed, as in the case of the eagles or the numerous pilasters, capitals, genii and bucrania, machines took over further production: in the workshops of the natural stone companies, 3D scanners scanned the pieces by the sculptor’s hand, and with these data sets, robotic arms milled the elements out of the raw blocks.

In the process, only about 97% of the work came from the machines. They created only unfinished surfaces, to which stonemasons added the finishing touches by hand, as in the past.

The exterior walls are also unusual because the large sandstone elements are integrated into the façade. For this purpose, a clinker wall with an average thickness of 60 cm was built in front of the load-bearing wall made of reinforced concrete. It is connected to the concrete behind it by hinge anchors.

The natural stone elements are embedded in the clinker wall to a greater or lesser depth, depending on their size and weight. The wall also carries the load of the decorative balustrade at the very top, which protrudes by more than one and a half meters. 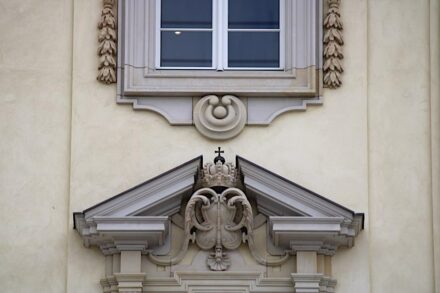 The aim of this elaborate construction was also to give the building an expression of durability and value, as was stated at a press conference. After all, the new palace, which with the Humboldt Forum will house a cultural beacon in Germany’s cultural landscape, was not supposed to look like a shopping mall with natural stone panels hung in front of it.

Only 3 of the façades were restored according to the historical model. The money for this came from donations that Wilhelm von Boddien had collected from sponsors worldwide in a tireless canvassing effort.

The 4th façade side, which faces Alexanderplatz, was planned by the Italian architect Franco Stella, who is also responsible for the new interior design in the palace. The material for this façade wall was a special artificial stone made of concrete with an admixture of sandstone powder. 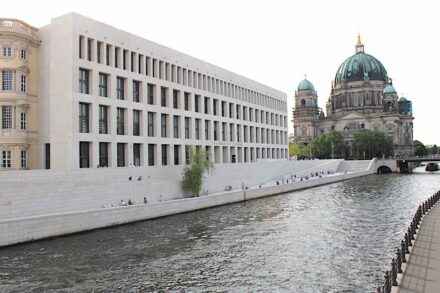 On this side of the palace directly on the river, the Spree Balcony with the Spree Terraces has been newly created, which the Berliners conquered immediately after the end of the Covid-19 restrictions.

From 1698 to 1716, Andreas Schlüter had given the previously modest palace its Baroque facade splendor. The figures and decorations were intended to emphasize the divine will behind the king’s claim to power.

After bombing raids, the building was burned out in February 1945. In 1950 it was blown up. In GDR times, the Palace of the Republic stood there.

In 2000, an international commission of experts recommended that a new building be erected in Berlin’s city center as the Humboldt Forum, in the dimensions of the Berlin Palace. This recommendation was followed by the German Bundestag in 2002.

The total cost of the reconstruction is estimated the builder at €677 million, of which the federal government shouldered €532 million and the state of Berlin €32 million, excluding the €105 million in donations for the restoration of the facade. 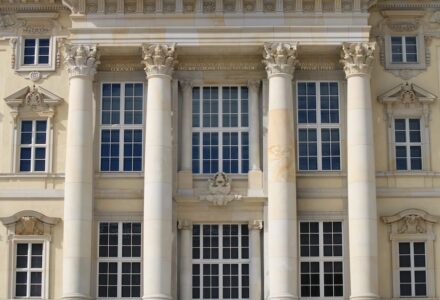 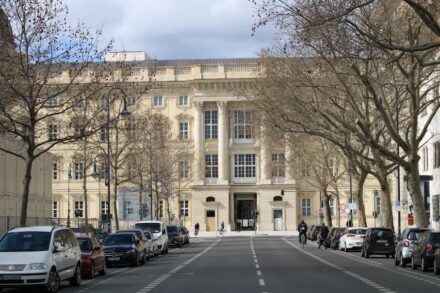 Back to the beginning and the Germans’ current enthusiasm for reconstruction.

Architecture professor Christoph Mäckler, chairman of the design advisory board for the aforementioned DomRömer project in Frankfurt/Main, suggested that the trend had to do with the modern world and globalization: “Society needs roots (and) anchors to be able to define itself,“ he said in an interview. People wanted architecture that gave them a sense of home and identification.

However, he did not advocate pure reconstruction. Rather he spoke of “continuing to build“: it was a matter of developing current forms from the architecture of past centuries that would meet people’s wishes. At least until today’s “urban development with its architectures once again meets the need for beauty and security.“

The natural stone companies entrusted the façade work were: Bamberger Natursteinwerk Hermann Graser, Hofmann Naturstein, Sächsische Sandsteinwerke, F.X. Rauch, and Schubert Steinmetz. As in the case of the original castle, the sandstone comes from the Elbe Sandstone Mountains (Elbsandsteingebirge) and from Silesia (Bunzlau/Boleslawiec). In the entrance hall there is shell limestone as flooring.

Events at the Humboldt Forum