Natural stone from Belgium always comes from Wallonia, and among the famous from there is the petit granite or the red and black marble 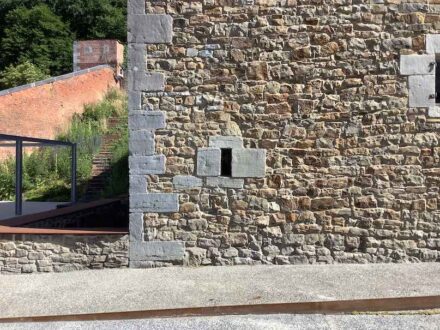 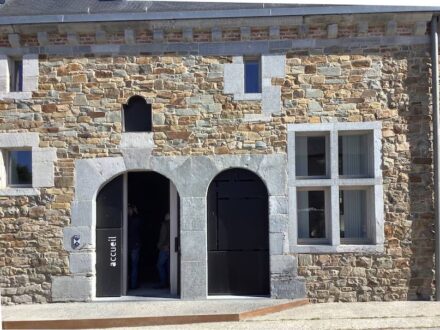 The local stones still characterize the face of the villages today

A beautiful example of how natural stone can give a face to an entire region is Wallonia in Belgium. It is the part in the south of the country with the border with France and consequently French is the national language. The Pierres & Marbres de Wallonie association had invited a group of architects and stone professionals to tour the quarries there.

The name of the association is a bit misleading, we would like to point out right away: it is the association for the stone sector of the whole of Belgium – the name comes from the fact that there are no stone deposits in the northern part of the country, which borders on the Netherlands and where consequently Dutch is the national language. This will play a role later in our report.

Wallonia surprised us with its beauty. The villages and towns really deserve the title picturesque, and the reasons for that are, first, that Belgians care about their “Patrimoine“, their cultural heritage, and second, that native stones are dominant in architecture there.

Limestone and sandstone are the main materials for the reveals around windows and entrances, both in historic buildings and in many new buildings. They are light-colored varieties that make a striking contrast to the red of the bricks. 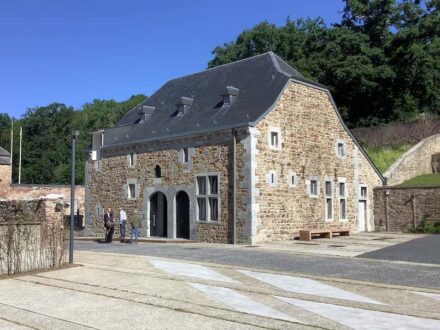 Early in history, natural stone was common as a building material in what is now Belgium. This was because there was mining there as early as Roman times. Later, the country even became an exporter to the entire world for a few centuries.

At this point, as announced above, we must return to the northern part of the country. Its name is Flanders, and it is the territory of successful merchants. There people had money to build expensive palaces, but no stones, but as for stones, they were plentiful in the south, easy to bring from Wallonia via the rivers Scheldt and Meuse, both flowing north.

And via the North Atlantic or the Baltic Sea, it was even easy to reach France or Spain in the west or the countries of the Hanseatic League.

The Petit Granite (translated: small granite) or Belgian Granite is, so to speak, the Belgian national stone. Again, the name is confusing, because it is a limestone with numerous tones from light to black, excellent properties for processing, and, as the name suggests, great hardness and durability. It is also called Bluestone. 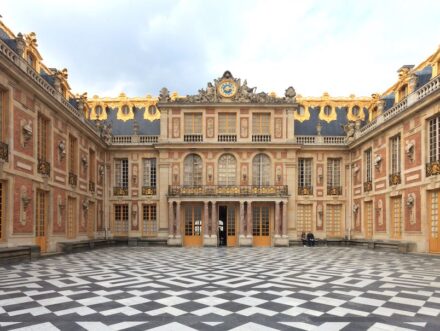 It has been used in major projects all over Europe and beyond. In Brussels it can be found on every corner, in Maastricht as well, just as in the city center of Chartres in France, at the train station of Strasbourg or the new one in Liège, built by Santiago Calatrava, and last but not least, the world is still talking about it, in the marble courtyard of the Palace of Versailles (together with white Carrara marble).

While petit granite, along with sandstone and slate varieties was the bread on the table, so to speak, of the stone sector, various marble varieties played the role of butter. For in Belgium, polishable red, pink, or black varieties were once quarried in copious quantities, that for special projects such as St. Peter’s Basilica in Rome, Florence Cathedral, or, of course, the Palace of Versailles.

The prehistory of this has its charm, which is why we are telling it: noblemen from French principalities took part in the Italian Wars between 1494 and 1559, and on their war campaigns in Italy they got to know the marble splendor of the noble residences and town villas there. On their return, they wanted something similar and found suitable stones in what is now Belgium. Soon a rich trade of such varieties developed to France, which was close by water.

The red Rouge de Rance and the black Noir de Mazy were particularly sought after. In the Palace of Versailles, clearly, they can be found even in the Hall of Mirrors.

Louis XIV even had his engineers build an extra transport route to get the heavy Rouge de Rance columns to Paris. 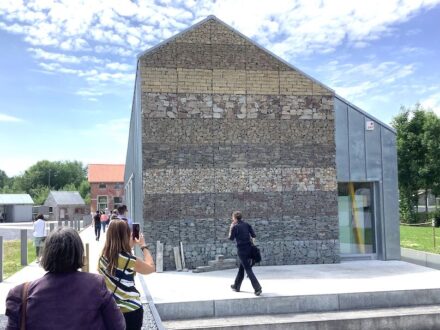 The black marble is still quarried today under the name Noir de Golzinne or Noir de Mazy (Noir Belge) and remains a rarity.

For several centuries, the stone sector was one of the most important economic sectors in Wallonia. As late as 1900, it employed 30,000 people. Some of the companies reached the size of industrial enterprises. And: one technology for the cutting of the blocks with the wire rope was invented and patented here.

During the 1st World War, most of the battles of which were fought in Belgium, the industry suffered considerable damage. In 1938, however, it once again employed more than 25,000 people.

Since then, this number has dropped to around 7000.

Today, most companies have between 30 and 40 employees. The exception is the Hainaut company with a huge quarry site, 35 active gates for processing, and about 400 employees. 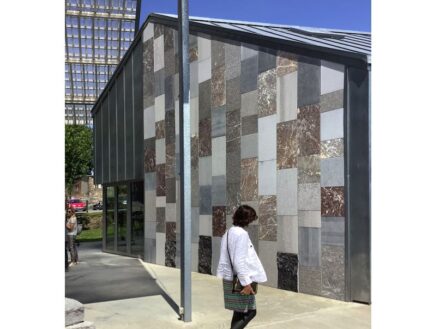 Together with their highly active association, the few companies have at least managed to keep the demand for natural stone high and the domestic varieties popular: According to Dr. Carlo Montani’s annual statistics (“XXXII Rapporto marmo e pietre nel mundo 2021 / XXXII Report marble and stones in the world 2021“), the country ranks fourth in the world in per capita consumption of ornamental stones. In 2020, Belgians had consumed 986 calculated units (square meters of 2 cm thickness) per person, behind the Swiss (1585 units), the Saudis (1431 units), and the South Koreans (1097 units). At the same time, that year had been comparatively bad for the Belgians; normally they average between 1400 and 1700 units.